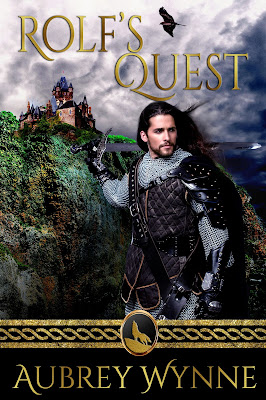 A wizard, a curse, a fated love…

When Rolf finally discovers the woman who can end the curse that has plagued his family for centuries, she is already betrothed. Time is running out for the royal wizard of King Henry II. If he cannot find true love without the use of magic, his line will end.

Melissa is intrigued by the mystical, handsome man who haunts her by night and tempts her by day. His bizarre tale of Merlin, enchantments, and finding genuine love has her questioning his sanity and her heart.

From the moment Melissa stepped from his dreams and into his arms, Rolf knew she was his destiny. Now, he will not only battle against time and a powerful duke, but defy his king and the gods to save her.

The woods were dim with the day nearly at an end. They would not reach the next town before dark. She picked up her heavy skirts and walked farther into the trees; the quiet and solitude wrapped around her like a balm. Her horse followed, snatching at a random leaf that still clung to a branch. Common sense told her to turn around, but a noise—no, a song —floated over the stillness.

Without thought, Melissa moved toward the sound. She approached the edge of the forest and stopped just behind a large oak. A man stood on a hill, beckoning to someone or something. His voice captured her, bound her to the spot, and her eyes fixed on the scene.

Silhouetted against the blood–orange sun sinking into the horizon, the dark, powerfully built figure slowly raised his right arm toward the evening sky. The sides of his mantle fluttered in the autumn breeze as a hawk screeched in answer. He raised his left arm, and the howl of wolves echoed through the air in obedient response.

A sudden gust of air swirled the black, heavy cloak around the legs of the man, sending leaves flying about his feet as if they were commanded to dance. Melissa watched from behind the tree and held her breath, for fear of being discovered.

His resonant voice rose in a chant that captivated, then soothed. It spoke to her, beckoned her. She clutched at the rough tree bark to resist the physical pull. Then the chant abruptly ceased.

His head snapped around and golden eyes locked onto hers. His gaze seemed to pierce her very soul, and her body pulsed with excitement as he pushed back the hood, exposing raven hair and the chiseled features of an extraordinarily handsome face. The rising moon glinted off his chain mail, his hand now resting on his sword hilt. She gasped, her gaze transfixed on the most magnificent creature she had ever seen.

Distant voices threatened to encroach upon this moment of fate. She pushed the sound to the back of her mind and focused only on the mysterious man in front of her. The urge to move closer overwhelmed her, and she stepped away from the shelter of the tree. Her feet moved of their own will, and her arms reached out to this stranger who now filled her with an intense need.

The voices behind her grew louder. Footsteps rustled dead leaves and brush, intruding on the enchantment. Her mind, not yet ready to let him go, struggled to stay in his world. But the mystical influence receded, and she knew he had released his hold over her. An inexplicable emptiness took its place.

Melissa reluctantly turned toward the commotion behind her, certain he would be gone when she looked back over her shoulder. Would she see him again? Her father had spoken of a wizard rumored to have the ear of the king. Her mind a tangle of unexplained questions, she bowed her head and attempted a look of repentance as her father approached.

“Daughter! What were you thinking to wander off alone?” She heard more worry in his tone than anger. “These are hard times. I fear too many thieves lurk near the main roads.”

“Yea, my lord.” The relief on his face caused her to regret the impulse for a moment of privacy.

She cast one last glance at the hill but spied only a single hawk, circling low. The bird landed on a nearby branch, observing the group. As Melissa admired its beauty, her heart raced. One hand covered her chest as her eyes locked onto a pair of golden ones. It cannot be him. Unless...

The bird seemed to read her thoughts. With one sharp cry, the winged creature took flight and disappeared over the trees. She reached out to stop him, but he vanished into the night.

Bestselling and award-winning author Aubrey Wynne resides in the Midwest with her husband, dogs, horses, mule and barn cats. She is an elementary teacher by trade, champion of children and animals by conscience, and author by night. Obsessions include history, travel, trail riding and all things Christmas.

Her upcoming series “A Vintage Romance” was inspired by tales of her stepfather, who served for the British Air Force in WWII. Wynne’s medieval fantasy series “Medieval Encounters” will launch in 2017 with Rolf’s Quest.