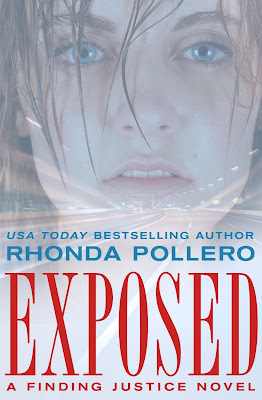 After a whirlwind romance, Darby Hayes Grisom married the man of her dreams. Smart, handsome, ambitious-Sean was everything she always thought she wanted. Little did she know that one year later that dream would turn into her worst nightmare. Sean is moody, angry, violent. Violent enough to kill. When Darby realizes she's pregnant she knows Sean will never let her go.

Attorney Jack Kavanaugh is the only person Darby can trust to help her with her plan to save herself and her baby. But the deeper Jack gets involved in protecting Darby, the deeper the feelings between them become. A complication Darby can't afford-because her husband is watching their every move and he'll do anything to get her-and their baby-back.

Oh, my goodness! The emotions behind Exposed were on point. I loved how raw and, well, exposed it was. Rhonda didn't sugar coat any aspect of this book. She pushed the envelope and went there. It was difficult for me to read certain scenes, mostly because it was just heartbreaking. While Darby is tenacious and intelligent, her plans don't quite make a whole lot of sense. I can't put myself in her shoes, but there had to have been something else she could have done. On the other hand, I didn't feel as strong of a connection to Jack like I did with Darby. There were glimpses into his thoughts, but I felt as if there were some pieces weren't fully explained (and I hope they will be in future books). I did really like the two of them together. Understandably, their romance takes a bit of a backseat to the suspense (which makes sense considering Darby's marriage) and I appreciate the slow burn. It felt as if less was more since they do fight their initial attraction towards each other.

I thoroughly enjoyed Exposed. It was my first book of the author's so I can't comment on how it compares to her previous books. I loved her voice and writing style. I appreciated her willingness to approach a potentially trigger subject, one that can be very difficult to read. There was one element of Exposed that made it a little bit confusing to read. There were a handful of times where the point-of-view switched characters when I wasn't quite expecting it. Exposed is written in alternating 3rd person and each perspective switch was marked with a new chapter or a different section within one chapter. There were a couple times when it switched with no warning and I had to backtrack a bit to figure out who's perspective it was in. Other than that, I truly did enjoy Exposed. It was a raw, emotional romantic suspense that kept me on edge from start to finish. I can't wait to pick up the next book in the series.

“Let’s step into the hallway,” Sean suggested, placing his arm around the shoulder of the officer, guiding him out of the room.

Darby slammed her head against the pillow and again hot tears welled in her eyes. Grabbing the call button, she pressed it over and over until a petite and clearly irritated nurse entered the room. In the split second the curtain was drawn back, Darby saw Sean and the sergeant sharing a handshake.

“Yes?” the nurse asked as she gave cursory glances to the machines tethering Darby to the bed.

“We don’t allow telephones in the rooms. Is there someone I can call for you?”

The nurse blinked, then peered back over her shoulder as she pushed apart the curtain. “Officer?”

Sean and the officer returned. It didn’t take a rocket scientist to see that the sergeant was totally charmed by Sean. The sergeant took up a position at the end of her bed next to the nurse while Sean moved to the head and draped his arm around her shoulders. “I was just explaining your condition to the policeman.” His fingers dug into the flesh at her shoulder.

Ciminelli smiled understandingly. “I’ve got three kids myself. My wife went a little hormonal with each one. She had all sorts of weird thoughts and cravings. Got so I was afraid to walk in the door after my shift. Never knew what was going to set her off.”

“Darby’s normally very rational,” Sean said, brushing a kiss to her temple. “Don’t you have something to say to the officer, sweetheart?”