Spotlight: Falling for the Highlander (Highlanders #4) by Lynsay Sands 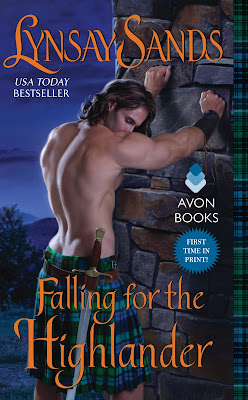 If there’s one thing Lady Murine will not abide, it’s her virtue being handed over to the highest bidder. When her scoundrel brother does just that—in exchange for a few Scottish horses, no less—she’s appalled, but she refuses to stand by and let it happen. She’s determined to take matters into her own hands, even if it means braving the countryside alone—or worse, with a tempting Scot by her side.

Dougall set out to sell a few horses to an English lord; he never expected he’d help smuggle a beautiful fugitive back to Scotland instead. When her brother offered Lady Murine for a few horses, Dougall was disgusted and promptly turned him down. But encountering the runaway lass on the road out of town sets something pounding in Dougall’s heart. There’s something about this fierce woman that makes him want to do more than just help her escape. He wants to protect her—with his life and his heart.

If Dougall’s not careful, this Scot might just end up tying the knot…

“Dougall,” Murine moaned in protest when he broke their kiss. She tried to shift against him again, but he held her still, trying to catch his breath and regain control of himself.

“Hush,” he murmured and turned sharply toward shore, intending to get them out of the water and set her away from him. He realized what a stupid idea that was when the supporting water fell away and she, probably afraid he would drop her, tightened her legs to keep herself up. Dougall stopped walking and dropped his head to her chest with a groan as her body slid against his again.

This had really been a bad idea, he acknowledged and took a couple of deep breaths, before saying, “I’m going to set ye down, lass.”

The words made his determination falter. If it weren’t for the way she slurred her words, he might have taken her there and then. However, there was a definite slur to her words. Murine was in no state to think clearly on this. He had to think for both of them, and while he’d pretty much decided he was indeed going to marry Lady Murine Carmichael and bed her well and repeatedly, he would not have her waking in the morning and accusing him of treating her like the whore her brother had tried to turn her into.

“Then why are ye stopping? Did I do something wrong? Tell me what to do and I’ll—” Her words died on a gasp as he suddenly dropped her into the water. It was a desperate bid to save them both. She was a tasty little bundle and Dougall could not fight himself and her too.

Leaving her to flounder back to her feet in the shallow water, he moved quickly back to shore, grabbed his tartan, laid it out, and knelt to begin pleating it with his back to the water. He didn’t do more than glance over his shoulder once to be sure she got out of the water safely, but then immediately turned his full attention forward again. He would give her time to dress and then escort her back to camp . . . and then he would not allow himself to be alone with her until they reached Buchanan and were safely married. He would not have her thinking he saw her through her brother’s eyes. 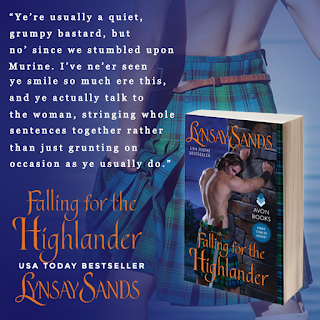 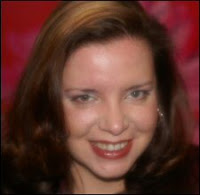 Lynsay Sands is the nationally bestselling author of the Argeneau/Rogue Hunter vampire series, as well as numerous historicals and anthologies. She's been writing stories since grade school and considers herself incredibly lucky to be able to make a career out of it. Her hope is that readers can get away from their everyday stress through her stories, and if there's occasional uncontrollable fits of laughter, that's just a big bonus. Please visit her on the web.