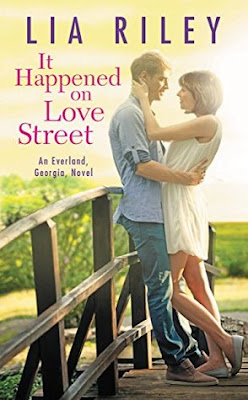 "I keep thinking about how I've been on this self-protected island. And you? You're a tsunami." - Rhett Valentime

The most romantic place she never wanted to be . . .

Pepper Knight moved to Everland, Georgia, as step one in her plan for a successful legal career. But after this big-city gal's plans go awry, going home with her tail between her legs isn't an option. So when the town vet-and her sexy new neighbor-offers Pepper a temporary dog-walking job, she jumps at the chance. No one needs to know that man's best friend is her worst nightmare . . . or that Everland's hot animal whisperer leaves her panting.

The last thing Rhett Valentine wants is to be the center of small-town gossip. After his first love left him at the altar, he's been there, done that. These days, life is simple, just the way he likes it. But sultry southern nights get complicated once sparks fly between him and the knockout next door. When she proposes a sexy, secret fling-all the deliciousness and none of the prying neighbors-it seems too good to be true. And it is. Because Pepper's determined to leave Love Street, and when she goes, she just might take his heart with her . . .

Holy cow... There was a lot going on in this book. As the introduction book in Lia Riley's new series, It Happened on Love Street definitely had a case of what I like to call the "first book" syndrome. It's not necessarily a bad thing. It is my term for when the first book in a new series has a bit too much going on and, as a reader, I don't quite know where to focus. It Happened on Love Street had the small town romance, a heroine with a fear of dogs, deep family issues, pirate lore, and a sexiest jackass judge. All of these elements fought for top billing and it felt a bit rushed because of that. Pepper's fear of dogs, for example, was cured in a blink of an eye. I wish that we were able to focus on just a handful of elements that were fleshed out and given ample page space.

Now let me focus on what I did like about It Happened on Love Street, the characters and Lia's writing style. I adored Rhett and Pepper. Sexy vet Rhett (hey, that rhymes!) is still suffering from his previous relationship. He doesn't want people nosing into his love life, or lack thereof. So when Pepper moves in next door and he's suddenly ready to dive back into the dating scene, he'll do whatever it takes to keep it on the down-low, including jumping a fence or two in the middle of the night. Much to his surprise, it doesn't take long for Rhett to start longing for something deeper. Pepper, on the other hand, is determined to get her life back on track. She won't let this unexpected detour keep her from her ultimate goal. Unfortunately, those closest to her have other plans. I loved Pepper's tenacity. Whether her intentions are misguided or not, she puts her family above all else. While I commend her for that, she does seem a bit controlling. In addition to Rhett and Pepper, there is a whole cast of background characters to fall in love with, especially two that I'm pretty sure we'll see more of in the second book.

Even with the "first book" syndrome, I enjoyed It Happened on Love Street quite a bit. As my first Lia Riley book, it served as a good introduction into her writing style and voice. There were moments that I swooned and moments when I giggled, which is always a plus in a fun romance. I loved the small town feel with the pirate lore and crazy cast of characters. I do hope that it continues on into the next book in the series. Plus, who can say no to that cover? And the next one is just as pretty. While there were moments that did feel rushed, I would still recommend It Happened on Love Street to fans of small town romances.

After studying at the University of Montana-Missoula, Lia Riley traveled the world armed only with a backpack, overconfidence, and a terrible sense of direction. When not torturing heroes (because c'mon, who doesn't love a good tortured hero?), Lia herds unruly chickens, camps, beach combs, and daydreams about as-of-yet unwritten books. She and her family live mostly in Northern California.