Spotlight: By Her Touch (Blank Canvas #2) by Adriana Anders 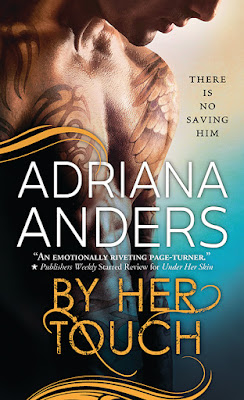 He Will Always Bear the Scars

Undercover cop Clay Navarro left the Sultans biker gang a changed man. Its ringleaders may be awaiting trial, but he wears the memory of every brutal act he was forced to commit tattooed across his skin. He doesn't have space in his messed-up life for anything gentle--not now, maybe not ever.

Dr. Georgette Hadley is drawn to the damaged stranger's pain, intimidated but intrigued by the warmth that lies beneath Clay's frightening exterior. But when the Sultans return looking for revenge, she finds herself drawn into the dirty underbelly of a life forged in violence...that not even her touch may be able to heal.

This time, George was ready when he arrived. Sort of.

It had been a busy day spent trying to catch up on Friday’s missed appointments, which was good, since her mind had spent an uncomfortable amount of time going back to him.

All day, she’d fended off questions about the bruises and anticipated his arrival with the
most unwelcome combination of excitement and apprehension, building it up so that, by the time his form blocked out the low evening sunlight, she had decided more or less how to proceed. No casual talk and no mention of Saturday night, besides a well-deserved
thanks. Professional, strict.

That, of course, translated to stiff, which probably only made her seem nervous. A complete failure in bedside manner.

George shivered. That voice. Rougher than she was used to, lower, without any hint of local Virginia twang.

“Mr. Blane.” He loitered in the doorway. “Come in, come in.” Great, now she sounded like a little old woman, enticing him with tea and cookies. Or something.

“How you feeling tonight, Doc?”

“That’s quite a shiner you got there.”

“I’m fine,” she snapped, tired of explaining the thing all day and not wanting to relive it with him right now, either.

The man moved inside, limping—which reminded her that he’d run back to the motel the other night—and finally pulled off his glasses, baring sharp, assessing eyes beneath two bright red, puffy lids, greased up.

At least he followed directions.

He stepped forward, hand out, and George hesitated, thinking for a second that he might… What? Kiss her? Hug her? Lord, she was messed up.

“Mr. Blane. Please,” she said, her breathing loud in her ears.

His eyes flicked between hers, measuring, weighing, and finally, apparently, deciding she wasn’t bluffing.

He gave in, lowered his chin in a single quick nod, then asked, “Where d’you want me, Doc?”

“Come on back,” she said, trying so hard to sound like the doctor she was, suddenly wishing she hadn’t insisted on seeing him this late, all alone, with her staff long gone.

As she led him to the last exam room on the right, George pretended he was just another patient—an urticaria needing steroid cream, a full-body skin check, or a mole to biopsy.

When she turned back at the door, though, and caught him eyeing her bottom or her legs,
hidden though they were by her trousers, her body reacted in a way that showed it knew the difference between him and everyone else, even if her mind didn’t care to. Just that look, that slide of his eyes over layers of clothing, dragged her into a morass of sexuality that she’d managed for years to avoid.

His gaze went up to her face, and she saw his eyes change, watched their warm brown darken to black, and the muscle in his jaw tighten. “Didn’t realize they’d got your face so bad.”

“Oh,” she said, her hand flying back to the telltale bruise. “It really is fine. No big deal.”
“You call the cops after I left?”

“No. No, I didn’t.” And then, because she didn’t want to talk about it any longer, she said, “Your eyes look good.”

“You call this good?” He shook his head wryly.

“I know it hurts, but it’s doing what it should. Red, blistering. Now, let’s get your shirt off, Mr. Blane,” she said, dodging his gaze. And that sentence—her stupidly chosen words—heightened her body’s fall into unwanted sensuality.

Wonderful. Just great. After all her careful planning and preparation. Rather than look at him as he stripped, George busied herself prepping the already-prepped room, her mind hunting for words that didn’t contain subtext within subtext, with even more subtext
lurking beneath.

Behind her came the sound of clothing being removed.

Oh, that did it. Her eyes, evil creatures, bypassed her brain’s directives entirely and slithered right to where her body wanted them—on that chest. Good Lord, that chest. She’d spent all weekend thinking about that chest.

Below his clavicles, he was so unfeasibly flat and broad, she’d need a half-dozen
hands to span it. And strong. Still lower, the muscles curved out, hard and male and
sexual in a way that pectorals shouldn’t be—they really shouldn’t. And then the thought of her bare hands, right there, touching his freshly shaven skin…

George swallowed audibly in the quiet room and reached for her gloves. A barrier.
“’S that okay? You hadn’t mentioned body hair last time, but I figured it’d make it easier.”

Another attempted swallow over dry, dry throat. “I mean, you did the right thing.

And him, thank God.

Adriana Anders has acted and sung, slung cocktails and corrected copy. She’s worked for start-ups, multinationals and small nonprofits, but it wasn’t until she returned to her first love—writing romance—that she finally felt like she’d come home. Today, she resides with her tall French husband, two small children and fat French cat in the foothills of the Blue Ridge Mountains, where she writes the dark, gritty, emotional love stories of her heart. 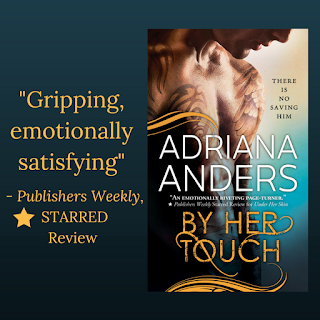 Posted by CrystalBee at 8:24 PM