Limited Sale: A Love to Kill For (Heat #1) by Conor Corderoy 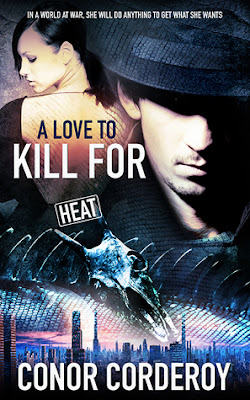 For Murdoch, women are bad news. Trying to stay alive in war-torn Andalusia, tracking a vanishing femme fatal, hunted by The Brotherhood, the last thing he needs is love…

In Liam Murdoch’s world there is no room for love, only the thrill of the game and the fast buck. So when a fascinating client persuades him to be the bagman in a blackmail payoff and he winds up with a bag full of fifty grand in cash and a box whose contents are worth more than that, Murdoch smells the chance to make a stash.

As Europe slides into bloody chaos, Murdoch must travel to war-torn Andalusia in search of the elusive Mary-Jane Carter and the even more mysterious Sinead Tiernan. He must get the answers only they can provide about the box and the sinister Brotherhood of the Goat, who are hunting for it. But once there, what Liam finds is the last thing he needs—love—and his world turns upside down. Instead of chasing cash, he’s fighting to save the life of the woman he loves.

Suddenly nothing and nobody is what they seem to be, and Liam finds himself fighting not only a mysterious enemy he cannot understand, but also his own turbulent feelings. He must battle to save a priceless treasure for humanity and the woman he’s learned to love from a fate far worse than death. 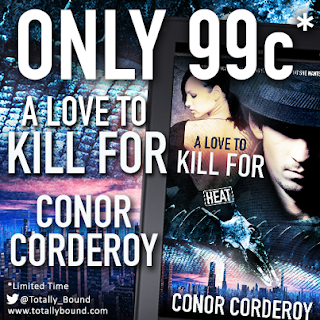 I parked my TVR Daemon outside Noddy’s Diner on the Portobello Road, put my ‘Doctor on Call’ sign on the windshield, loped through the gray rain and pushed through the door. Chandler once described a woman as the kind who’d make a bishop kick holes in a stained glass window. This one would have had him burning down the Vatican with the Pope strapped to the roof of the Sistine Chapel. It wasn’t just that she was a drop-dead looker. She was. She had all her curves in the right places, bobbed black hair, crimson, Cupid’s-bow mouth and slow sea-green eyes. But more than that, she managed to look vulnerable and lethal at the same time in a way that stirred your primal urges till you had smoke billowing out of your sphygmomanometer. Yeah, look it up.

In my book, all women are bad news. They make you feel this thing called ‘love’, so you’ll let them chew you up, suck you dry then spit you out before they move on to their next victim. But even by those standards, I could see this lady was the kind of bad news they interrupt regular broadcasts for. Fortunately, I’m immune to bad news.

She and Noddy both saw me as I pushed in, but I noticed his eyes pleading in a way I had never seen before. I ignored him and eased onto a stool next to the vamp, pulled out a Camel and asked Noddy for a Martini, dry. He stared at me like he was astonished I wanted that drink instead of another and said, real urgent, “This is Caffrin, Liam. Caffrin ’oward. I told you abaht her.”

I nodded that I knew and he went to get the Martini. While he put it together, I flipped my Zippo and lit up. She watched me do it the way a cat watches a fly—cute and patient, and ready to eat it alive the minute it gets close enough. Finally, I blew smoke and said, “Noddy thinks I can help you. Want to tell me how?”

She made a slow, green blink. When she spoke, she had that absence of accent the English call cut glass, but husky with it.

“I’m being blackmailed, Mr. Murdoch. I’ve arranged to make a payment and collect the incriminating material, but I’m afraid that when I do, I may be murdered.”

I’m not easily fazed and this didn’t faze me, but I wasn’t expecting it. I took a moment to study the olive in my Martini. It floated, so I bobbed it up and down a few times. I took a sip and, as I put the glass down, I said, “So you want me to get murdered for you.”

She didn’t even have the decency to blush. Whether she said yes or no, it was going to be the wrong answer. So she said, “Not exactly, Mr. Murdoch. I’d like you to make the drop and collect the material. I shall pay you very well for that. Clearly, I don’t want you to get murdered.” Something like a smile played across her face. “That wouldn’t help anybody, would it?”

I nodded. “Especially me. You want to give me some background?”

She hesitated and pointed at my glass. “Can I have one of those?” While Noddy fell over himself in four different directions assembling a second Martini, she gestured at my cigarettes. I nodded and pushed them along the bar with the lighter. It’s hard for a woman to make a Zippo look graceful. In her hands it was triple-X-rated exquisite. She let the smoke drift out through red lips and read my face for a while. I put a blank page there. After a moment she said, “I used to work as a high-class prostitute. I had highly placed clients. I was expensive…”

I said, “Class usually is.”

She blinked sea-green at me and carried on. “I didn’t waste the money. I put myself through university. I read biology and did a master’s in business. Just over a year ago I bought myself into a biotechnology research and development company as a partner.” She sucked on the Camel, frowning at the ashtray. “There are films and photographs. They’re held by a man. We used to call him the Don. He used to be my…” Her look turned resentful, like it was the ashtray’s fault she’d once had a pimp. She tapped a little ash into its mouth and said, “Manager. I bought myself out a couple of months ago, but now he wants money for the films and the photographs. If I don’t pay, he’ll send copies to the board.”

I took a long drag on my cigarette and squinted at her through the smoke. “I’ve known a few pimps in my time, Miss Howard, and a few blackmailers too. Most of them weren’t smart enough to know a biology degree from an amoeba’s ass, but most of them weren’t dumb enough to kill a goose that laid golden eggs, either.”

She tilted her chin and smiled. Her voice was so husky it could have pulled a sled across Alaska. It was getting to me. She said, “You don’t believe me.”

“Me and Descartes, sugar. I believe I exist because I can hear myself think. Outside of that, I don’t believe shit. I’m not a hit man, Miss Howard. I’m not going to kill your blackmailer for you.”

Outside, the rain had turned torrential. A rumble of thunder shook the ceiling and the lights in the diner winked off, so we were sitting in shadow. She shook her head. “That isn’t what I’m looking for.”

“If everything you say is true, he can keep the squeeze on you for years. Why should he want you dead?”

She stubbed out her cigarette, smoke trailing from her nose. She sipped and licked her lips with a very pink tongue.

“It’s a little more complex than that.”

“So tell me the complex bit. I can recognize an amoeba’s ass.”

“How colorful…” She watched me a while in the half light. Then the lights came on and somewhere a fridge began to hum. “During the time the Don managed me, I accumulated a lot of information about him, his operations and his clients. I told you some of them were important men—and women. People in the public eye. If I should ever decide to write my memoirs, Mr. Murdoch, it would cause a lot of people a great deal of embarrassment. More than that, it could bring down important political careers and, with them, the Don’s power. I don’t think I need to paint you a picture. It’s in the Don’s best interest—and his clients’—to make me very dead.”

I nodded. “Have you anything more concrete than a general theory of his motives?”

“Yes, the way he’s set up the drop. He’s done it before to other people. I’ll be extremely vulnerable.” Her cheeks flushed incongruously and she smiled. “I’m between a rock and a hard place, Mr. Murdoch. I daren’t risk not going—not making the drop. But I know if I do, he’ll kill me. He has to.”

What she said made sense. A man like she described could not afford a loose cannon, especially one as smart as Catherine Howard. But even so, I knew she was lying. For one thing, if she were for real, she’d work for Russian Pete, not some anonymous Don. And Russian Pete would have introduced her to me by now. My gut told me that every word out of her mouth was a lie that concealed layers of deeper lies. But I also knew, as I sat looking into her level, green eyes, that I didn’t give a damn. I crushed out my cigarette and said, “So what do you want me to do?” And just so she didn’t think I was as soft as Noddy, “And how much does this caper pay?”

She took a swig of her Martini and said, “I just want you to go in my place.”

“What makes you think he won’t kill me?”

“Does that worry you?”

“Yeah. I don’t like getting killed. It gives me a headache.”

Conor Corderoy was born in England in 1957. He spent his childhood on Formentera, the smallest of the Balearic Islands among intellectuals, artists and writers. He had no formal schooling, though he had a governess for four years who became an alcoholic and disappeared when he was twelve. He spent his teens in Cordoba, southern Spain, where he got his first job aged sixteen, breaking in wild horses. He has since done more jobs than he can remember, including free-lance writing, law, hypnotherapy and psychotherapy. He now divides his time between England and Spain. He is an Incorporated Linguists, a barrister, a psychologist and a Master Practitioner of NLP.