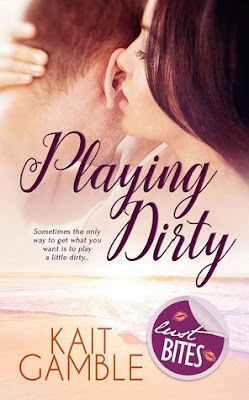 "I've played nice all day. No one is around. Time to do what we want." - Rafe

Olivia just wanted to give her best friend the best wedding experience and was fully prepared that her own devastatingly handsome polo-playing ex, Rafael, would be there too. What she didn’t expect was that all their friends would use the occasion to try to push her and Rafael back together.

Rafael just wanted to get through the event with a little dignity, but since his teammates got it into their heads that he and Olivia are meant to be, things have become a little complicated.


Their friends aren’t going to let anything get in the way of bringing Olivia and Rafe together—not even the couple in question.

I know that when I am in the mood for something super sexy or if I want to read something short and hot, I can count on Totally Bound and Kait Gamble to deliver. In this case, I had just finished a clean-ish romance and let's be honest, I needed something quick and dirty. So I did a {not so} quick search in my Kindle for a Kait Gamble book that I hadn't read and I got to reading. Thankfully it was one of the publisher's Lust Bites because I started it after midnight. I swear I never learn... Kait's Playing Dirty was sexy as hell. Watching Olivia and Rafael dance around each other was fun. Rafael is sex personified and watching Olivia crumble was quite amusing. How the girl held out for as long as she did is beyond me. I think any woman would have jumped him from the start. Playing Dirty is a super short novella, but what I loved the most was the twist at the end. Way to throw a reader for a loop. If you are in the mood for something quick and dirty, pick up this book.

Olivia Wade took a deep breath and pushed open the door of the cab, taking in a lungful of the sultry sea air when it hit her. She inhaled the aroma twice more before she pulled out a few bills and handed them to the driver, who had already been to the trunk and retrieved her tiny carry-on and garment bag.

Taking his proffered hand, Olivia stepped out and simply stared at the stunningly gorgeous surroundings, letting the beauty wash over her. And the unease. After focusing on the mounting excitement and getting to this day, actually being in the moment elicited some mixed feelings. Happiness and excitement bubbled through her, but so did a trickle of dread.

She could endure whatever came her way for a few hours. How hard could it be for her to be a good friend and do her duty? Especially in this amazing place? Anything for Jane. The words had been her mantra for weeks, repeated more often as this day approached, and would surely be invoked more than a few times before it ended.

Her best friend’s wedding. All at once a wondrous and irksome event. The latter for Olivia, at least. She couldn’t be happier for her friend. Ecstatic, in fact. Jane had found her true love and would be marrying him on what promised to be the perfect occasion. Of course it would be. It was Jane’s big day. Everything would be executed with military precision.

And yes, the moment Olivia turned to look at the building, Jane’s mother appeared to usher Olivia in. Just as if she’d been waiting to pounce.

“Olivia! Right on time!” Patricia Claibourne rushed out of the doors, dressed in her mother-of-the-bride finery. “You look wonderful! The rest of the girls are waiting for you inside. How was your flight?”

“Thank you, and the flight was lovely, Mrs. Claibourne.” Olivia cringed the moment she called her that. There was just something about Jane’s mother that made Olivia feel like a ten-year-old again. A gauche, gangly one who needed supervision lest she break something terribly valuable.

“I’ve told you time and time again to call me Patricia.” She wound an arm around Olivia’s waist and squeezed. “A bit nervous?”

Olivia wasn’t the nervous type. Patricia knew that just as well as anyone in her family. She had an inkling of what Patricia was suggesting. Olivia stayed silent and waited for her to continue rather than fuel whatever was going on in the woman’s mind.

She didn’t have to wait long.

“Rafael is here, you know.” Patricia said it conversationally, but Olivia could see the calculating glint in the woman’s clear blue eyes. As if she were testing the waters to see whether or not Olivia’s ex’s presence was going to unnerve her.

Of course Rafael was there. He was Danilo’s best friend. He would have been roped into wedding-party duty just as she had been.

Olivia shrugged. “I figured he would be.”

She found herself on the receiving end of a long stare. “That’s not going to be a problem, is it?”

She patted the woman’s arm. “I won’t let it.” Olivia wasn’t going to permit anything to spoil the wedding or any of the festivities. Their best friends were getting married. Olivia knew Rafael well enough to believe he would be as unwilling as she was to do anything to spoil their day.