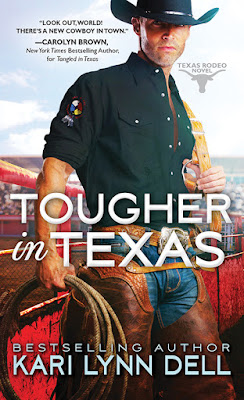 Rodeo producer Cole Jacobs has his hands full running Jacobs Livestock. He can’t afford to lose a single cowboy, so when Cousin Violet offers to send along a more-than-capable replacement, he’s got no choice but to accept. He expects a grizzled Texas good ol’ boy.

He gets Shawnee Pickett.

Wild and outspoken, ruthlessly self-reliant, Shawnee’s not looking for anything but a good time. It doesn’t matter how quickly the tall, dark and intense cowboy gets under her skin—Cole deserves something real, and Shawnee can’t promise him forever. Life’s got a way of kicking her in the teeth, and she’s got her bags packed before tragedy can knock her down. Too bad Cole’s not the type to give up when the going gets tough… 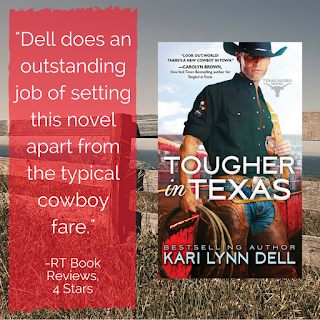 Tougher in Texas is the story of Cole and Shawnee, a pair of rodeo pickup men--except one is a woman. Pickup men work in tandem to help cowboys off bucking horses at the end of a ride, clear the horses and bulls from the arena, and generally do everything they can to ensure the safety of all...occasionally even the audience, as in one scene in this book. Inside the arena Cole and Shawnee have to trust each other implicitly. Outside the arena...well, that's where it gets really tricky for these two damaged souls. In honor of my dynamic duo, I picked out my favorite fictional cowboy partners.

Hands down, no comparison is Robert Redford and Paul Newman in Butch Cassidy and the Sundance Kid. This movie has it all—action, suspense, humor, incredible camera work, and a bromance with chemistry that’s off the charts. And the romance is pretty hot, too. The scene when Sundance is waiting in Katharine Ross’s bedroom and forces her to undress at gunpoint absolutely crackles with sexual tension. It's a buddy movie, a heist, a comedy, a shoot ‘em up...in other words, damn near perfect. And did I mention PRIME Redford and Newman?

Here’s where everyone expects me to talk about Gus McCrae and Captain Call from Lonesome Dove, but they get enough attention. In honor of all the great ranch and rodeo horses who’ve been my partners over the years, I’m going to Australia with Jim and Denny in The Man from Snowy River. Jim is the cowboy. Denny is his tough, gutsy buckskin mare. Together they shot one of the most thrilling equine action scenes in movie history with their breakneck ride down the side of mountain, which you can watch at https://www.youtube.com/watch?v=DZBXLYJwgt4. This descent is so iconic that any time we have to go bounding down a steep ridge after a cow we call it ‘doing the Snowy River’, and any rancher worth his salt knows exactly what we mean. Yes, there’s also a romance, but at the end Jim rides away not with Rebecca but his true love—Denny.

And now an excerpt from Tougher in Texas, in which Cole and Shawnee’s newly forged partnership faces the ultimate test: a runaway bull and a carnival midway.

The cowboy nodded and Flight Risk fired out of the chute, a fifteen-hundred-pound missile launching into midair. His head whipped around to the left and his body followed; the sheer power ripped the cowboy’s hand out of the rope. He shot backward, ending up astride the bull’s butt. On the next jump, Flight Risk slung him skyward, but instead of sailing free, the cowboy was jerked down and slammed into the ground, one spur caught in the flank strap.

Hung up in the worst possible way.

Cruz threw his body on top of the cowboy in hopes that the extra weight would rip the spur free while Hank grabbed for the tail of the flank strap to yank the slip knot loose. As his hand closed around the rope, Flight Risk kicked high, picking Hank up and tossing him a dozen yards, right into Hammer’s path, forcing Cole to rein up hard. The flank strap and the cowboy came loose and Flight Risk broke into a gallop, headed straight for the luxury boxes. Her path blocked by the scrambling cowboy, there was nothing Shawnee could do but watch as Flight Risk reached the fence, gathered himself, and leapt.

He landed in a narrow walkway between two of the VIP boxes, greeted by screams and flailing bodies. Flight Risk ignored them, focused on the tunnel that led under the grandstand and out to freedom—and the midway.

He was already riding through a pass gate and into the stands. Shawnee was right on his tail. Hammer and Salty plowed through the chaos, impervious to dropped beers and flying nachos. When they clattered out the end of the tunnel Flight Risk was twenty yards ahead, aimed straight for the line of shooting galleries and ring toss games. A mother grabbed her toddler and flung him over a low counter, face first into the rubber duck pond, then dove in after him. A carnie waved his oversized hammer in self-defense as the bull hooked a giant purple panda with one horn and flung it onto the lap of a bug-eyed girl on the Tilt-a-Whirl.

Flight Risk dodged left between a cotton candy booth and a trailer peddling funnel cakes and deep-fried pickles. Cole followed. Shawnee stayed right so the bull couldn’t circle back. As they thundered past the mini donut truck, people scattered, shrieking and stumbling. Salty did a nifty shuck and jive to dodge a stroller, knocking a candied apple out of a wide-eyed teenager’s hand.

“’Scuse us!” Shawnee called over her shoulder.

As they came even with the next gap between vendors, Shawnee saw Cole’s loop settle over the bull’s horns, then heard Hammer’s hooves scrabbling on the asphalt when Cole dallied up and attempted to bring the bull to a stop. As Flight Risk turned, Shawnee skidded around the shaved ice stand, took two swings, and laid her loop under his belly, snatching up both hind feet and whipping solid dallies around her saddle horn. Salty grunted but held as the bull stretched between the horses, teetered, then flopped onto his side a foot shy of a bouncy castle filled with squealing preschoolers.

Shawnee was blowing as hard as Salty. Ho-lee shit. That…was…so…awesome.

Cole didn’t look nearly as thrilled, eyeing the pandemonium in their wake, and the flock of morons with cell phones already creeping closer. “We’ll have to hold him until security clears these idiots out, then take him back to his pen and go ask that dickhead what he thinks of his fence now.” Then, of all things, he grinned, and her heart gave an odd little blippity-blip. “Nice loop, by the way.”

A warmth that had nothing to do with the heat rushed through her. It was just…okay, yeah, it meant more coming from Cole, not because she treasured his opinion, but because he was so stingy with his praise. That was all. Just a major ego stroke.

And maybe, just a little, that smile. Damn. She considered mentioning that if he broke it out a little more often, his wife hunt might go considerably better. But she’d had to earn it…and she didn’t want to share.

She couldn’t turn loose of Flight Risk and run, so she did the next best thing. She batted her eyes and leered at him. “See? I told you we’d be good together.”

But this time, Cole didn’t blush.

Kari Lynn Dell brings a lifetime of personal experience to writing western romance. She is a third-generation rancher and rodeo competitor who works on the family ranch in northern Montana, inside the Blackfeet Nation. She exists in a perpetual state of horse-induced poverty along with her husband, Max and Spike the (female) Cowdogs, a few hundred cows and a son who resides on the same general segment of the autism spectrum as Cole Jacobs and doesn’t believe names should be gender-limited.