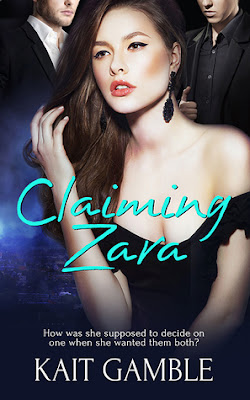 "This is going to sound greedy, but I care about you both. I want you both. For once, I want something for myself. I want the freedom to do what I want with who I want. And now that I have that, I need both of you in my life." - Zara King

How is she to choose?

Zara King’s life is in shambles and filled with questions.

How had she ended up married to a man who didn’t love her and couldn’t keep his philandering ways under wraps?

How was she to move onto the next phase of her life without revealing a couple of secrets of her own? Namely her lovers, Tobias and Garrett.

How was she supposed to decide on one when she wanted them both in her life?

What would happen if they found out her desire?

Zara’s about to get some answers.

Publisher's Note: This book has previously been released as part of the Three's a Charm anthology with Totally Bound Publishing.

Confession time... With the recent heat wave that blasted Southern California, I really haven't been into reading full length books. For whatever reason, I tend to not want to read for very long when it is super hot, so my attention switched to novellas and short stories. In the span of a day, I finished three Totally Bound short stories. One of which was Claiming Zara by Kait Gamble. The other two reviews will come in the next week or so.

If you are in the mood for something sexy with a hint of kink, you will love Kait Gamble. Claiming Zara was a sexy as sin romance. Even as a short story, readers still get three characters to fall for. It didn't take long for me to be firmly planted on Zara's side against her asshole husband. It didn't take long for me to love Tobias and Garrett, two men that put aside their reservations to make Zara happy. I would have loved to see more of the three of them, especially a few months or years down the road. Or even as they stumbled during the beginning of the relationship. I think it would have been fun to follow them a bit more. But for a short story filled with heat, you can't go wrong with Kait's Claiming Zara.

“Your husband’s been seen with yet another woman…”

“The fourth woman this month.”

“What are you going to do?”

“How can you just keep turning a blind eye?”

Weren’t those the questions she’d been asking herself lately?

Zara King ducked the cameras and queries, relying on her guard to put a wall between herself and the suffocating press of the paparazzi. She darted into her limo, followed a split second later by a big, hard body.

Even as they settled into the buttery leather and he pulled her back to lean against him, Zara turned to stare through the tinted windows at the clamoring mass of faces and arms bearing phones and cameras. “They’re only doing their job.”

“Which is to be vultures,” he grumped.

“At least until your husband pulls his next asinine move, then it’ll get worse, as it’s been progressively getting.”

Zara rubbed her temples, trying to massage away the tension. Tobias was right. The biggest mistake of her life had been marrying Robert King. When their families had urged them together at a young age it had all seemed to make sense. They were from illustrious dynasties, they’d found each other attractive—they had been convinced a marriage of convenience would only work in their favor.

She had gone into the union a wide-eyed and dutiful daughter, aching to be a good wife. The shine on the deal had tarnished in swift and terrible fashion when, within the first year, Robert’s eye had started to wander. Meanwhile Zara had been left rattling around their sprawling mansion alone, forgotten and rudderless.

Some good had come out of it, however. Zara had involved herself with a number of charities, working long and mind-numbing hours to improve the lives of others while hoping to forget the dismal state of her own.

They had stayed together for superficial reasons—though Zara was sure no one was falling for the façade any longer—and had lived separate lives for the best part of a decade. The fact that he wasn’t even trying to hide his indiscretions any longer just proved that any last smidgen of respect for her was long gone.

His escapades were reported on by all who wanted to and left her looking like a fool. Zara thanked her lucky stars that she’d had the prescience to visit her lawyer that morning. The latest trip might have helped her find a way out.

Tobias curled his fingers into the hair at her nape, flexing and stroking, soothing her. “I’m sorry. I shouldn’t be stressing you out more.”

“You have a right to your own opinion.” Though her words were curt, she leaned into his touch. For such a large man, he had the ability to treat her with tender care. What Tobias could do with his hands…

He used his other one to tip her chin up so her eyes met his. “Just like you have the right to walk out on that asshole.”

She smiled a tiny bit but said nothing as she turned to watch the world flash past in a blur of glass, brick and cement.

Bit by bit, the brick gave way to blue and she breathed a little easier. The city was fine in short stints, but Zara preferred to be away from the crowds and cars. If there was a perfect place for her it would be a tropical island full of sun and sand, hot days and sultry nights. Peace and quiet.