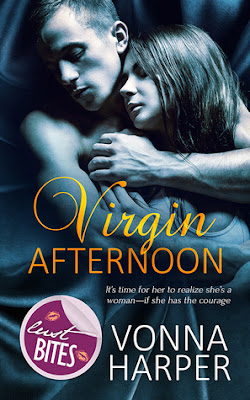 A woman alone too long. A man who senses her need and knows what to do about it.

Long before Lara’s husband died, she committed to being his caregiver. Even though that meant no intimacy, she doesn’t regret having been there until the end. But now she’s alone and lonely—and she doesn’t know how to handle her sexual needs.

Bryan, her husband’s best friend, senses the emptiness inside her. It’s time for her to realize she’s a woman—if she has the courage.

While I enjoyed reading Virgin Afternoon, it did leave me with some mixed feelings. On one hand, I love the idea of Lara and Bryan discovering each other after heartbreak. Being intimate is both arousing and scary, especially for Lara. I loved watching her awaken and embrace her sexual desires again. However, I really wanted this story to be longer. Maybe not a full length romance, but at least a longer novella. I felt that Lara and Bryan still had so much more to their story and I wasn't ready to leave them. Which, to me, is always a good sign since I wanted to keep reading. Overall, Virgin Afternoon was a short story filled with emotion and desire. I just wish it was a tad longer.

How strange it was to see a man in her garage, but if any man had a right to be there, it was Bryan Aster.

“Are you sure, Lara?” he asked with his head under the pickup’s raised hood. “It’s in great shape. With that low mileage, you could get several thousand more than I can pay you.”

“I know, but Spence wanted you to have it.”

Bryan’s big, rough fingers continued to grip the hood, but she doubted if he was still looking at the truck’s inner workings. Being this close to her husband’s best friend was disconcerting in ways she didn’t want to hold up to the light. Part of her wanted him to leave, but she’d spent so much time alone since Spence’s death—and even before. It was time to rejoin the land of the living—and who better than with a man she’d known at least ten years?

“So you’re going to move, are you?” He slammed the hood, rattling her nerves even more than they already were.

“I have to. I didn’t tell Spence this, but the house is in foreclosure. With all the medical bills, his not being able to work and my having to take so much time off— What’s that look about?”

Bryan shrugged, the gesture taking her back to when they were all in college and he’d been the baseball team’s catcher during the exciting year the team had won the state championship. “I wish you’d told me.”

“Why?” She tried a mischievous smile, something she hadn’t felt like doing for too long. “Have you been robbing banks and are willing to share your ill-gotten gains? Even if you were rich, I wouldn’t want to be bailed out. Truth is, I don’t want to live here anymore.”

Lifted eyebrows served as Bryan’s response. How healthy he looked—tan with a full head of dark hair, the faintest shadow of lines around his eyes and at the corners of his mouth. Funny, she’d never noticed that small dark mole on his right cheek, but maybe she’d never studied him like this before. Hadn’t felt his energy before.

“Go on,” she said. “Tell me what’s on your mind. Maybe you think I should stay.”

“I want you to do what you want to, Lara. You’re the only one who knows what’s right.”

Lara. Damn, why did the sound of her name coming from his lips make her nerves jump? “I’m still trying to get in touch with what I want out of life. That didn’t matter all the time Spence was sick. Look, it’s hot in here and there’s beer in the fridge.”

“There is? I didn’t think Spence was drinking, you know, near the end.”

“Bryan?” She waited until she was sure she had his full attention. “Don’t tiptoe around me, please.”

His eyes narrowed. “All right. I won’t.”

“Good.” She filled her lungs. “Back to what we were talking about, Spence had stopped drinking. This is left over from one of the last times you came to see him. He asked me to pick up some.”

Again, Bryan let silence do its work as he led the way back into the house, his movements as familiar as if he lived here. He didn’t, of course, because he and Carol had a condo a few miles away, but he’d been here countless times and probably knew the place’s creaks and groans as well as she did. He took two beers out of the refrigerator, opened one and handed it to her.

“I don’t—” she started, unable to take her eyes off his hand.

“Today you do. Come on, you always said you’d stoop to a beer if the day was hot enough. It’s hot.”

Yes, she acknowledged as they went into the air-conditioned living room and plunked themselves into adjacent recliners—summer had arrived while she was too busy caring for a dying husband to pay attention. After briefly holding the can against her cheek, she took a sip. Wonderful!

Bryan’s form filled his chair, his shoulders scrunched a little to accommodate the inadequate space. Although he hadn’t crouched behind home plate for years, he still carried himself as if he belonged there protecting his turf, battling for a win, daring a runner to try to knock him down.

Vonna Harper doesn't know and she has given up trying to find the answer. It's enough that many readers are drawn to what some call the dark side. All she asks is that readers understand she writes fiction--a brand of fiction she finds fascinating.

Vonna has lost count of the number of books, novellas, and short stories she's written. What she has no doubt of, it's a hell of a ride.