Currently Reading: The Trouble with Christmas by Debbie Mason 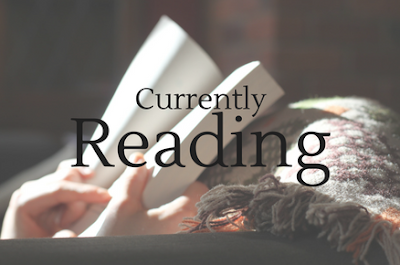 Welcome back to the second edition of Currently Reading, which in this case should actually be called Just Devoured. When I get a Debbie Mason book in front of me, everything else just fades away. While I was reading The Trouble with Christmas, I knew I had to share this scene between Gage and Madison. Gage McBride and his sugar tooth... 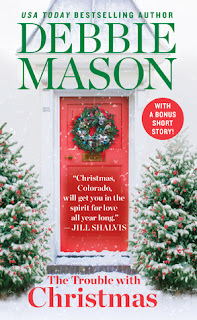 "I'm not," he murmured into her sweet-smelling palm. He lifted his gaze to hers. "Have you been baking? You smell like sugar cookies."

He firmed his grip, then placed a soft kiss to the center of her palm. Her eyes darkened, the hurt he'd seen there moments ago turning to heat. "Tastes like sugar cookies to me," he said gruffly. The look on her beautiful face urged him on, and his kissed grew hotter, hungrier.

A needy whimper escaped from her parted lips and shot straight to his groin, shutting down the voice of caution in his head - the warning that if he kissed those pouty lips nothing would ever be the same. He slid his free hand around her waist, tugging her closer, drawing a finger into his mouth.

He kissed the tip of each finger then brought his mouth to her ear. "You sure you weren't baking today?"

She shook her head, curling a hand around his neck, drawing him closer. "No, I ate one, maybe two," she murmured, turning her face so that his mouth slid across her cheek to her lips.

"Geezus, you're sweet," he said just before he covered her mouth with his. And instead of worrying that he was kissing a woman, a woman her had no business kissing - in his aunt's driveway - all he could think was he finally had the mouth he'd fantasized about since the first day they'd met. Framing her face with his hands, he took advantage of her parted lips and delved inside her mouth. She melted against him, caressing his tongue with hers, tangling her fingers in his hair. He took the kiss deeper, losing himself to the wild mating of their mouths.

It will take a Christmas miracle to melt her heart.

Resort developer Madison Lane is about to lose the one thing she loves most in the world - her job. Dubbed "The Grinch Who Killed Christmas," Madison spoiled a deal that would turn quaint Christmas, Colorado, into a tourist's winter wonderland. Now the citizens want her fired but the company gives her one last chance, sending Madison to the small town to restore the holiday cheer.


For Sheriff Gage McBride, no hotshot executive from New York City is going to destroy the dreams of the people he loves. But one look at this beautiful woman and it's his heart that may be broken. In just a few days, Madison causes more trouble than he's had to deal with all year. He can't decide if she's naughty or nice, but one thing is for certain - Christmas will never be the same again.
Posted by CrystalBee at 6:00 AM