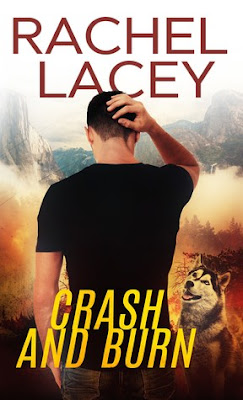 "First time I've ever spent the night with a man on the same day we met. It's not half bad."  - Isa Delgado

Terrified of flying, Isa Delgado is determined to conquer her fears. Agreeing to accompany a dog on her “freedom flight” from the shelter, Isa gets ready for the journey of her life, boarding a plane with a sexy and rugged pilot.

Silicon Valley CEO Nate Peters volunteers his time and personal jet for animal rescue missions. Flying the stunning and compassionate Isa is just an added perk of the job. But when the plane malfunctions over a forest fire, Isa’s biggest fear comes true as they crash into the fiery woods.

After crashing in a remote area, Nate and Isa must find sanctuary in the midst of the forest as flames threaten to engulf them. Nate and Isa fight for survival as they seek comfort in each other’s arms. With time running out, will they outrun the fire that burns around them while igniting the desire that heats up between them?

As a fan of Rachel Lacey's contemporary romances, I'm excited about her exploring a new side of her writing. And as a reader that has been interested in disaster/survival/adventure romances, I was chomping at the bit for Crash and Burn. I was on the edge of my seat from the moment Isa and Nate stepped foot on the plane. You can feel their desperation and the determination to survive. I liked that they truly had no idea what they were doing and are relying on sheer instinct. That gave the book an element of "holy shit, this could go seriously wrong." Especially towards the end where things got dire. At its core, Crash and Burn is a romance so you know that things will end happily, but how these characters get to that point is by traveling on extremely rocky road. And I loved that Rachel did not go easy on her characters.

What I am most excited about is that Crash and Burn is the beginning of a new series that is totally different from Rachel's prior works. I cannot wait to see where she goes next with the series. How is she going to build upon it? How will they be connected? What disaster or accident will appear next? All questions I'm excited to have answered in the next book.

Rachel Lacey is a contemporary romance author and semi-reformed travel junkie. She's been climbed by a monkey on a mountain in Japan, gone scuba diving on the Great Barrier Reef, and camped out overnight in New York City for a chance to be an extra in a movie. These days, the majority of her adventures take place on the pages of the books she writes. She lives in warm and sunny North Carolina with her husband, son, and a variety of rescue pets.