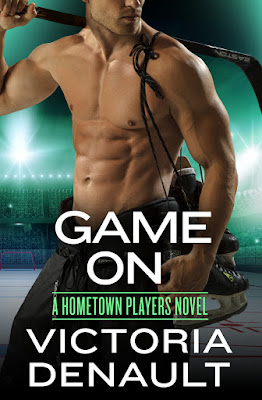 When it comes to scoring in the pro hockey league, Alex Larue is crushing it—with the hot puck bunnies.  He’s the life of the party, the guy with all the jokes… and the one whose Party Guy mast keeps the real him well hidden.  The last thing he needs is anyone finding out about his troubled past, or the nightmares that haunt him still.

Brie Bennett is less than impressed by Alex from the moment she meets him.  And even though he insists on volunteering at the charity she runs, she doesn’t trust him.  He’s hiding something…but so is she.  She’s not just the rich privileged New York princess he thinks she is.  The animosity between them is undeniably addictive and as their worlds keep colliding it becomes supercharges with something else—attraction.  But if they stop playing games and let each other in, they both might lose. 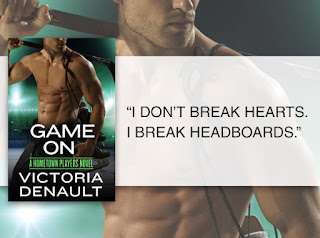 I look around at Alex’s sparse apartment. There’s a sectional, an ottoman, but no chairs, bookcases or pictures. The nook for his bedroom only contains one three-drawer dresser. His bedside lamp is on the floor beside the bed because it doesn’t have night tables. “You don’t seem to like things.”

He shrugs, and those deep blue eyes find mine. “I don’t have a lot of things from my past worth holding on to.”

Oh, this man… I reach up and gently cup the side of his face. He grasps my hand and I think he’s going to pull it away, but he doesn’t. He holds it to his face and pushes into it. He’s like a puppy looking for love, and I want desperately to give it to him. But he won’t let me.

“And you seem to want to throw away things now that are worth holding on to.” I force myself to step back and start walking toward the front door because if I don’t leave now I’ll let things happen that are going to mean more to me than they should. Than he wants them to. But his words stop me in my tracks.

“I don’t know how to be a boyfriend, Brie.” The look of pure confusion on his face would be comical if we were still talking about his inability to run a dishwasher. But we’re talking about feelings here. “The only thing I’ve ever committed to was hockey and even it tried to reject me. Hell, in a way every time I get traded, I feel like it still is. But it’s a thing, not a person. Hockey doesn’t have a choice, but you do.”

I start to walk back into the kitchen as he turns away from me to look out the window. “People who have had the choice to keep me in their lives never have.”

Thank God he’s turned away because I actually press my palm to my heart to keep it from cracking. Holy shit. I have no idea how anyone would walk away from him – the man and his big, broken heart –because what I want to do is run to him. “Give me that choice and I’ll change your track record.”

He grunts and turns back to face me. “You’re this amazing, stubborn, gorgeous woman who wants more than the one thing I know I can give. And as much as I suddenly, for the first time in my life, want to try and give more, I’m so fucking clueless as to how.”

He nuzzles my hand and but then turns his face and kisses my palm. When he turns back to me he looks so serious it’s startling. “I want this.”

I smile. It’s not big, but I feel it inside me from my toes to the roots of my hair. “Game on?”

He smiles back, raw but darkly playful. “Game on.”

Victoria Denault loves long walks on the beach, cinnamon dolce lattes and writing angst-filed romance.  She lives in LA but grew up in Montreal, which is why she is fluent in English, French, and hockey.

Enter to win 1 of 15 free ebook downloads of Game On!