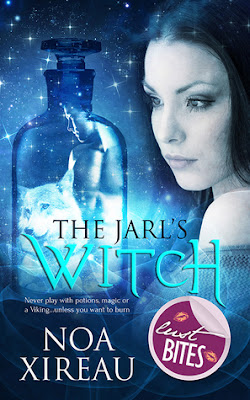 “Are you prepared to bewitch me now?” - Jarl Leif

Never play with potions, magic or a Viking…unless you want to burn.

Eileen should never have made a magic potion for the conniving Ingrid. Preparing the concoction Eileen used for studs in mating season instead of the love potion Ingrid had asked for hadn’t been a very good idea, either. And, instead of using Ingrid’s hair, as she was supposed to when she’d prepared the potion meant to entice Jarl Leif, she’d accidentally used her own. No wonder Eileen’s heart felt as if it skipped a beat when she discovered her mistake. Now, Eileen has a bad feeling her life might be at stake if she doesn’t keep the impressive Viking far away from her enchanted brew.

As you may have noticed, I don't read a lot of paranormal romance. So for me to be immediately drawn to one is pretty big. For me to read it within minutes of it landing in my Kindle is also pretty big. I devoured this puppy (heh) in less than twenty minutes. It was so damn good. Actually, I wished it was a little bit longer because I would have happily kept reading. I freaking loved the sexiness of it. I loved how sly Jarl Leif is. He is yummy and a half. Eileen accidentally using the wrong hair lead to some of the sexiest scenes I've read in a while. This short story was just so much fun. And now I'm on a hunt for more sexy paranormal romances!

Satisfied, the wolf watched how the witch took the lock of hair from a shelf crammed with bowls, jars and dried herbs and let it fall into the cauldron. No doubt she was too sick of the other woman’s incessant, annoying chatter to even notice she’d picked up a raven-black lock for her spell and not the golden one she was supposed to use. The blonde woman, on the other hand, seemed too focused on herself to pay attention to how her love potion was being prepared. He hadn’t known what to expect when he’d swapped the locks but it seemed the gods were on his side.

Loosening his taut muscles, he rested his snout on his paws as he reveled in the warmth coming from the fireplace and the witch’s cinnamon-rich scent. He watched, entranced with how her generous breasts moved as she stirred her potion, and he tried not to imagine how they would swing when… Don’t go there!

He squeezed his eyes shut but his stifled groan escaped, sounding like a pathetic whine. He had set his plan in motion. Now, he only had to wait. He’d already waited a long time, a bit longer wouldn’t hurt…too much.

Eileen sighed and kept stirring while the skinny blonde went on and on with her prattle and demands.

“Now that Leif is back from court and his father is dead, he’ll attend our mid-summer feast to represent his jarldom,” Ingrid said, sniffing at yet another jug and scrunching her nose.

Why did the woman touch everything? Eileen hated people sticking their noses into her potions and herbs. She took a deep breath, trying to remember she couldn’t raise her voice to her jarl’s daughter.

“The concoction needs to rest…at least until tomorrow morning and—” Eileen tried in vain to distract the irritating woman from talking nonsense.

“Everybody has noticed that ours is the only neighboring jarldom Leif has been visiting frequently since he came back from King Harold’s court, and rumors are out that he’s looking for a bride.” Ingrid smiled. “Everybody expects Leif to ask for my hand during the festivities. Wouldn’t it be amazing? All single women would be envious of me. I’d bet most of the married ladies too,” Ingrid added with a satisfied chuckle. “But if I have to marry Leif, then I want him to fall in surrender at my feet, to worship me like a goddess and—”

A snort-like sound had Eileen direct a warning stare at the wolf lying beside the fireplace. The snow-white beast looked back with big, innocent blue eyes as if he didn’t know where the faint noise had come from. Yeah, and I’m going to believe you! Eileen thought dryly. The animal was as intelligent as Loki himself.

Why the beautiful animal had appeared two weeks ago at Eileen’s doorstep and had chosen to stay was still a mystery, although the way Eileen had seen him act made her suspect there had to be more to the creature than what met the eye. Was he Loki in the flesh? The shape-shifter god who was said to appear in the form of a wolf from time to time? Whatever he was, now wasn’t the moment to show his human-like qualities—not in front of Ingrid.

“I want Leif eating from my hand and…”

Eileen rolled her eyes. Was the woman daft? She made magic, not miracles! The man Ingrid desired was not only the neighboring land’s new jarl but also one of King Harold’s fiercest and more renowned warriors. Skalds recited his great deeds, men admired his berserker nature and women whispered about his sexual prowess. A shiver ran down Eileen’s back. She had seen Leif only a few times and had avoided him ever since.

The first time, Leif had appeared out of the thin ether just as her former owner and his sons had been about to rape her in the woods on their way back from the weekly market. Eileen touched the large scar criss-crossing her throat. She could still feel the cold steel biting into her skin as they’d told her to be quiet while they’d torn her clothes from her body and their rough hands had fondled her everywhere. She had been only a child then, a defenseless girl about to lose her innocence in the most terrible way, when a loud, menacing growl had resounded through the woods, making her owner and his sons stop to look around, startled.

Eileen had barely had time to recognize a man standing in the shadows of the trees. Everything at that moment had been confusing and too fast. Bert, her owner’s youngest son, had laughed and looked relieved. Horrified, she had witnessed how Bert had approached the stranger with wide-open arms and had invited him to join the fun. But Bert’s laughter had died as his head had been severed from his body. The whole forest had seemed to freeze as Bert’s head had rolled over the muddy ground. Its small green eyes had still been wide open—staring at her—when the head had come to a halt only a few feet from her.

Between tears and whimpers, Eileen had seen how the blond warrior had gone berserker and slaughtered all her owner’s sons before he had gone with cold, glazed eyes after their father. When Leif, covered in blood and grime, had finally turned to stare at Eileen, she hadn’t been able to stifle her screams. Terrified, she’d scrambled backward, trying to escape him.

Eileen had thought she’d be the next one to lose her head. Instead, Leif had stopped dead in his tracks. Without further words, he’d thrown his tunic and belt knife toward her. Then he had turned around and disappeared into the woods, leaving Eileen alone, almost nude, surrounded by blood and beheaded bodies.

Eileen had been barely thirteen then, and Leif couldn’t have been more than four or five years older than she was. Now, in hindsight, she considered it an even greater deed for Leif to have taken down those men. How had an inexperienced youngster been able to slaughter four men? Eileen shook her head and kept stirring the potion.

The incident had changed Eileen’s life. She’d never told people the truth about what had happened in the woods, but with the villagers knowing about her incipient powers, rumors that Eileen had been the one to kill all those men with her black arts had run rampant. From that instant, everybody had stayed out of her way, and the new jarl had ended up finding a plausible excuse to send her to this hut—as far away from him and his family as possible, but still within his reach to make good use of Eileen’s abilities.

Not that she could complain about Jarl Elof’s decision. The hut was old and had been neglected, but she’d been able to turn it into a warm shelter. She loved her new home and the freedom to do what she wanted. Well, yes, of course she felt very lonesome sometimes. Who wouldn’t? She was human after all. But she preferred her peace and solitude over the continuous abuse a female thrall was exposed to in a household full of men.

Her motto is "Good girls go to heaven, bad girls go everywhere". Maybe that's why she's always off visiting other worlds, even if her home is in the beautiful south of Spain. But just don't try to tell her that she isn't a good girl as that's about as risky as taking away her beloved chocolate or alpha heroes!

Posted by CrystalBee at 9:23 PM