Review: Fool Me Once (First Wives #1) by Catherine Bybee 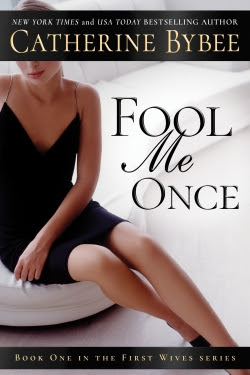 "Love it grand, but divorce is a hundred grand." - Lori Cumberland

Cynical divorce attorney Lori Cumberland lives by one motto: Love is grand, but divorce is a hundred grand. With one failed marriage under her own personal belt, Lori had fallen hard and early—and it isn’t something she plans on repeating. She’s content focusing on the temporary marriages of her rich and famous clients. When she joins some of her recent divorcées on a celebratory cruise, her only vow is fun, sun, and new friends. But Lori finds herself tempted by a jury of one.

For Reed Barlow, falling into the world of private investigation was easy. He knows the law and knows how to avoid breaking it—all while doing his job. His rule to live by? No emotion, no involvement…until Lori. His charming smile and cocky attitude distracts Lori and lowers her guard, which is exactly what Reed desires.

But what appears as a one-time-only flirtation may be a plot orchestrated by Reed. As he’s taking his investigation to a dangerous level, it’s Lori who could end up in jeopardy. Reed has only one shot for Lori to grant him a second chance. But if he comes clean with her, he blows his cover. And that just might cost him the opportunity for an alliance of family…and of love.

When I pick up a new book from Catherine Bybee I know that I will get a fabulous romance filled with friendship, sexual tension, and just a hint of suspense. The fact that all of her characters are connected through friendship among strong and successful women always makes me happy. In Fool Me Once, the first book in Catherine's new First Wives series, we meet Lori and Reed, two characters with something to hide. The attraction between them sizzles from the start. However, once things really get good, everything around them goes haywire. Two sketchy guys... Missing jewelry... A mysterious woman... Throw in exotic locations and you get this fabulously fun book.

I thoroughly enjoyed this book. As with most of Catherine's books, Fool Me Once has an amazing cast of characters. Not only Lori and Reed, but also a supporting group of new and old friends. There are a couple characters we haven't met before, at least I don't think we've met them in previous books. I'll have to double check to satisfy my curiosity. I can't wait to follow the rest of the First Wives ladies as the series progresses.

In the First Wives series, a spin-off of bestselling author Catherine Bybee’s wildly popular Weekday Brides series, the fun starts when the contracted marriages end. Four women, all involved in a matrimony-for-hire service to the rich and famous, discover that there is life—and love—after divorce. Attorney Lori and her three Alliance clients Shannon, Avery, and Katrina learn that the journey from wealthy man’s wife to seemingly cast-off bride is anything but smooth. Still, as they band together and regain their footing, these first wives are about to find out that the second time really is the charm.

New York Times, Wall Street Journal, and USA Today bestselling author Catherine Bybee has written twenty-seven books that have collectively sold more than three million copies and have been translated into twelve languages. Raised in Washington State, Bybee moved to Southern California in hopes of becoming a movie star. After growing bored with waiting tables, she returned to school and became a registered nurse, spending most of her career in urban emergency rooms. She now writes full-time and has penned the Not Quite series, the Weekday Brides series, the Most Likely To series, and the First Wives series.

Posted by CrystalBee at 9:03 PM