Pass the Popcorn: Pets, Royalty, and Ice Sculptures... Oh my! 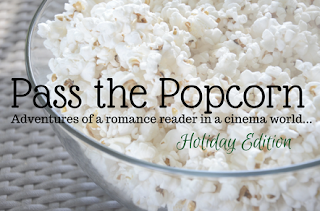 Holly Jolly! This past week turned out to be a Christmas romance marathon. Between the HoHoHo Readathon (which I sadly had to take a break from for a prior commitment) and the multiple Hallmark Channel movies I watched, it was Christmas non-stop here. And I'm not complaining one bit! Although I would like to read something with a bit more Fall, so if you have any suggestions please leave a comment.

For more information about each movie (including air times), click on the movie posters and you'll be sent to IMDB.

The first movie I watched this week was Christmas Festival of Ice. I really wanted to enjoy the movie because I'm fascinated by artists that can create amazing ice sculptures. It's a gorgeous art form that isn't usually a topic in movies. So I was all for that. Unfortunately, this one fell a bit short. I liked the characters and the story, but there was something a little off with the pacing. I also didn't feel the chemistry between the two main leads. I recorded it so I might give it another shot later in the month, but it wasn't a winner this time.

Later in the week, I caught two of my favorite Hallmark movies - The Nine Lives of Christmas and Crown for Christmas. Both included some of my favorite elements in a holiday romance - pets and royalty.

The Nine Lives of Christmas is probably as corny as a holiday romance can get, but I will always stop to watch it. Mostly to swoon over Brandon Routh, but the story is pretty good as well. *grins* I love that it is a stray cat that brings the two characters together and keeps bringing them together until they finally get the hint. Two paws up...

The last movie I watched just yesterday was Crown for Christmas. I'm pretty sure one of the reasons why I love this movie so much is because it actually reminds me of another made for TV movie from 1999, Au Pair. It has the same elements... Random woman hired to be a nanny for a single father who happens to live overseas (except he's not royalty in Au Pair). One of my favorite scenes in the movie is during a ballroom party. I love how the camera moves around the couples as they waltz, especially how it circles the male lead as he's dancing with his two love interests. Well, one is the love interest. The other is after his money, of course. Plus, Danica McKellar plays the heroine. Bonus points.

So those are three of the movies I watched last week. There were a couple others, but I know I'll watch them again and I'll chat about them later. Do you have any favorites you want me to watch? Comment below and I'll check them out! Plus I'll be doing non-Hallmark Pass the Popcorn posts later in December. Yay for the holidays!
Posted by CrystalBee at 8:59 PM