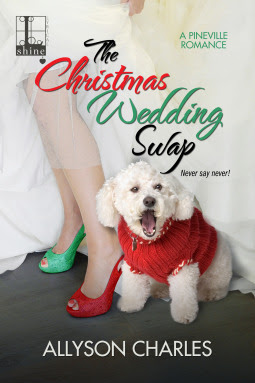 "You'd better not kill me. I will be one bitchy ghost haunting your ass." - Allison Stuart

Allison Stuart has always been the odd-woman-out of her family. She wears her jeans a little too tight, colors her hair a little too blonde, and instead of going into medicine and law like her sisters, she runs a diner. She’s also the only single sibling left. And while she won’t change her style, and her meatloaf is to die for, thank you very much, she wouldn’t mind her share of wedded bliss. So she makes an early New Year’s resolution: No more meaningless flings.

Drop-dead sexy Luke Hamilton is everything Allison has sworn off. His only serious relationship has been with his five-star restaurant, Le Cygne Noir, in Chicago. When he’s threatened by a lawsuit, Luke decides to hide out in Pineville, Michigan, until the statute of limitations runs out. The small town is filled with Christmas charm, but he can’t imagine living there. Heating things up with the hottie who owns the local diner would make his exile bearable—if he can convince her to give up her ridiculous resolution . . .

The Christmas Wedding Swap is the quintessential holiday romance. In fact, I've described it as a Hallmark movie, only sexier. This book had everything I love in a fun holiday romance. Hilarious initial meeting between the hero and heroine? Check! Instant attraction? Check! Hysterical banter turned foreplay? Check! Fun-loving cast of secondary characters? Check! Honestly, there is not much more I want in a Christmas romance. I flippin' adored this book. Allyson's writing style is fun, witty, and sexy. Her characters are so damn lovable. I loved the banter between Allison and Luke. The one-liners in their banter had me cracking up at all hours of the night. I just had such a fun time reading this book and I could easily see Allyson landing herself a spot on my favorite authors list. I need to pick up the other books in this series.

Allyson Charles lives in Northern California. She’s the author of humorous, small-town, contemporary romances under the Allyson Charles nom de plume. She writes steamy historicals as Alyson Chase. A former attorney, she happily ditched those suits and now works in her pajamas writing about men’s briefs instead of legal briefs. When she’s not writing, she’s probably engaged in one of her favorite hobbies: napping, eating, or martial arts (That last one almost makes up for the first two, right?). One of Allyson’s greatest disappointments is living in a state that doesn’t have any Cracker Barrels in it.

Posted by CrystalBee at 2:05 PM