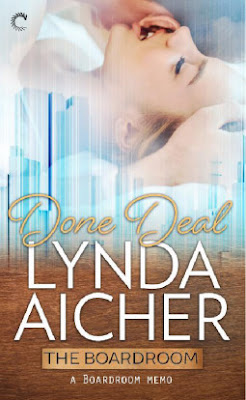 "Shall we begin?" - Trevor James

At night, behind the closed doors of the Boardroom, it's members only. Stripped of their inhibitions, Bay Area moguls are free to indulge their most extreme fantasies, and business becomes pleasure.

Never in his dirtiest dreams did CEO Trevor James expect to see Danielle Stables on the guest list.

There'd always been something unspoken between them—a spark yet to ignite. An inscrutable and defiant player in the firm, Danielle exudes power and secrets. Tonight she is going to surrender. No strings. No judgments. No boundaries.

By dawn, the games between them will have only just begun.

As prequel novella goes, Done Deal was pretty damn hot. It does a fantastic job setting the tone for the series, which will be hot as hell. It also introduces a couple whose sexual tension was friggin' amazing. Readers will have to be patient with this one, though. While Done Deal does introduce us to Trevor and Danielle, it doesn't give us the full story. This is only the initial coming together for them, which I hope will lead towards a super sexy conclusion later on in the series. Hopefully that'll come sooner rather than later.

Lynda Aicher is a RWA RITA award finalist, RT Reviewers’ Choice Winner and two time Golden Flogger award winner who loves to write emotionally charged romances. Prior to becoming an author, she spent years traveling weekly as a consultant implementing software into global companies until she opted to end her nomadic lifestyle to raise her two children. Now, her imagination is the only limitation on where she can go, and her writing lets her escape from the daily duties of being a mom, wife, chauffeur, scheduler, cook, teacher, cleaner, and mediator.

Posted by CrystalBee at 9:58 PM