Review: Cowboy, It's Cold Outside (Twilight, Texas #8) by Lori Wilde 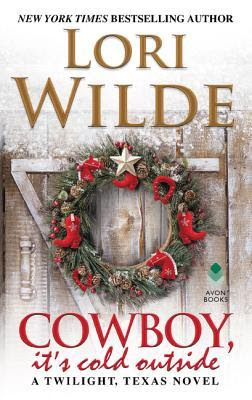 "If you think looking into my eyes unlocked your creativity, just wait until we have sex." - Paige MacGregor

Everyone in town knows that Christmas in Twilight has a way of bringing lovers together . . . but will its magic bring this pair from “I won’t” to “I do”?

Wearing a too-tight “Santa Baby” costume held in by a double pair of Spanx, Paige MacGregor runs headlong into a gorgeous, grey-eyed hunk of a long, tall cowboy. And not just any cowboy, but country-western star Cash Colton, visiting Twilight to perform in a charity concert. Most women would melt at his feet, but Paige knows all too much about self-assured men with cocky attitudes, so she tells him to get lost.

Cash is in town, nursing his own broken heart, but Paige has knocked him off his feet. He’s convinced she’s perfect—someone to inspire his music and share his now-empty bed. True, he’s not marriage material, but he’s determined to convince her that they’re perfect together—at least for a while. But what he doesn’t count on is falling in love with the one woman who isn’t about to give him the time of day!

It's been awhile since I've read one of Lori Wilde's books and I've forgotten how much I adore her. Lori's characters and the small towns they reside in are so wholesome and welcoming that I always look forward to revisiting. For the past few years, reading a Twilight, Texas Christmas romance has become a little holiday tradition for me.

In Cowboy, It's Cold Outside, we meet Paige and Cash, two characters who are in need of a little matchmaking cookie magic. They share a lot more in common than they originally think. Both have had to rely on themselves to get where they are in life. And both are recovering from two fairly toxic relationships. Much to Paige's chagrin, not even she cant ignore the attraction and instant chemistry between the two. What starts as playful banter quickly develops into the budding relationship that rebuilds both of their wounded hearts.

Lori Wilde is one of my go-to authors for sweet romance. Don't get me wrong... There is plenty of sexual tension and sizzling chemistry to light any Christmas tree. That's what I love the most about Lori's books. There is no shortage of chemistry. I love her characters and I always look forward to catching up with previous couples. It truly is like being welcomed with open arms to a world where everything is possible. Plus it's Lori Wilde. I can never say no to her writing style.

And I am so glad that I get to continue with my little tradition of reading a new Twilight, Texas romance next year.

Lori Wilde  is the New York Times and USA Today bestselling author of more than 60 works of fiction. Her books have been published in 32 countries and translated into 25 languages.

a Rafflecopter giveaway
Posted by CrystalBee at 6:51 PM