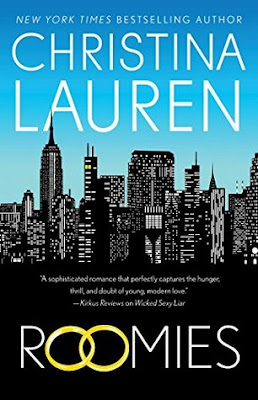 "I think I've made it pretty clear you can have me if you want me. I practically refuse to put on clothes when we're in the apartment." - Calvin McLoughlin

From subway to Broadway to happily ever after. Modern love in all its thrill, hilarity, and uncertainty has never been so compulsively readable as in New York Times and #1 international bestselling author Christina Lauren’s (Beautiful Bastard, Dating You / Hating You) new romance.

Marriages of convenience are so . . . inconvenient.

Rescued by Calvin McLoughlin from a would-be subway attacker, Holland Bakker pays the brilliant musician back by pulling some of her errand-girl strings and getting him an audition with a bigtime musical director. When the tryout goes better than even Holland could have imagined, Calvin is set for a great entre into Broadway—until he admits his student visa has expired and he’s in the country illegally.

Holland impulsively offers to wed the Irishman to keep him in New York, her growing infatuation a secret only to him. As their relationship evolves from awkward roommates to besotted lovers, Calvin becomes the darling of Broadway. In the middle of the theatrics and the acting-not-acting, what will it take for Holland and Calvin to realize they both stopped pretending a long time ago?

This book was freaking amazing. GAH! Words actually fail me...

Before I jump into my review, I have to tell you that I am a music brat. What does that mean? I was surrounded by music my entire life. From traveling to DCI competitions since before I can remember to playing the violin from the 2nd grade to my high school graduation, music has always been a large part of my life. I absolutely love musicals and I even got to play in the orchestra my high school's annual musical my senior year. As much fun as that was... I still can't watch The Sound of Music without cringing. No told told me about the long ass rehearsals...

Why am I sharing this? Well, when I found out that Christina Lauren was going to sign at The Ripped Bodice this Sunday, I immediately went searching for a book to read. I remember hearing about Roomies around the blogosphere and once I read the synopsis I was all over it. Not going to lie, I struggled with it at the beginning. I was fighting off a reading slump because I had no desire to read. I fought through it. Kept going back to Holland and Calvin for the small amount of time my brain allowed me to read. Once it finally clicked and I was good to go, I finished 75% of it in a matter of hours. It was amazing!

As my first Christina Lauren book, Roomies knocked it out of the mother-effing ballpark. This book made me giggle-snort and bawl like a freaking baby. We're talking full on ugly cry from which there was no going back. Once we clicked, I didn't want Roomies to end. I was hooked. I loved watching Holland grow as an individual. She went from being comfortable in the shadows to a fully confident woman on the verge of tackling the publishing world. Calvin was no slouch, either. Through his moments of being absolutely oblivious, he too grew as a character who's dream is about to come true. Maybe not as much as Holland, but that doesn't minimize his progress at all. The only character I could not stand was Lulu... For obvious reasons...

Now that I've finally read a Christina Lauren book I need to pick up Beautiful Bastard. I don't know when, I just know it will happen. And hopefully soon.

Now I hope Roomies didn't sent me into a book hangover...

Christina Lauren is the combined pen name of long-time writing partners/besties/soulmates/brain-twins Christina Hobbs and Lauren Billings. The coauthor duo writes both Young Adult and Adult Fiction, and together has produced fourteen New York Times bestselling novels. Their books have been translated into 31+ languages. (Some of these books have kissing. Some of these books have A LOT of kissing.)