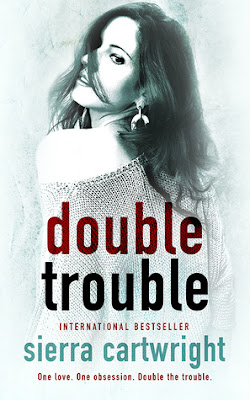 One love. One obsession. Double the trouble.

This time, he won’t take no for an answer.

Helpless, trapped by the glare of a spotlight at an auction she never agreed to participate in, Bridget is stunned when bidding for a weekend with her goes higher and higher.

She’s frantic when she realizes the gorgeous, successful Daniel Armstrong has won her. For years, she’s been attracted to the renowned heartbreaker, but she’s kept him at a distance to protect herself.

When he claims her, she believes things can’t get worse. Then he introduces her to his identical twin, Jacob. Suddenly, she’s faced with not one, but two men determined to make her every fantasy come true and take her to the heights of submission.

I love Sierra's writing, but Double Trouble wasn't one of my favorites. While there were elements that left me unsatisfied and wanting more, there were still things that I did enjoy. It had the sexiness and chemistry that I've come to love with Sierra's writing, but I felt like it would have been better as the first book in a series so we could explore other facets of their relationship.

“If you think I’m strutting out there”—she glanced out from behind the heavy velvet drapes toward the stage that had been artfully decorated and prepared for the upcoming fundraiser—“to be auctioned off like a lamb, you’ve lost your mind.” Before Mary could rush on with a million reasons why her suggestion was a brilliant one, Bridget took away the argument by saying, “I know it’s a worthy cause and all the money will support children’s education, the answer remains hell, no.” Besides, she had donated her services as a bartender for the evening, leaving her own pub shorthanded on a Saturday night. By any measure, she’d done her part.

“How long has it been since you’ve been out? With a man, I mean.”

“That’s not fair.” Bridget flinched. “I work a lot.” Even she heard the defensive high note in her voice.

“If you actually had a date, you wouldn’t need to spend all your money on batteries for your toys,” Mary pointed out, pressing her advantage.

Bridget glanced around then sighed in relief when she noticed that the other lambs were occupied talking amongst themselves. And none of them seemed as disturbed by the idea of being presented for public consumption as she was. “I’ll have you know my battery purchases are a much-needed part of the economy,” Bridget defended. “Without me, hundreds of people would be out of work. Besides, I can find my own dates, thank you very much.” She just didn’t have time for one. Or so she kept telling herself.

Mary raised one of her sculpted eyebrows.

Bridget shuddered. That look had dragged her into more misadventures than she could count. Because she’d had many years to recognize the tactic, and Bridget had mastered the art of the dodge.

“Look, how could I know Carmen was going to get the flu?”

Carmen Ortiz was not only a TV news weather reporter, she was hot, as famous for her short, tight skirts as she was her personality and meteorological skills. She was used to being in front of people, accustomed to the limelight. And people wanted to date her, which meant they would bid big bucks when she stepped onto the stage.

Bridget, on the other hand, was famous for pouring a Guinness with a great head and fending off randy customers who wanted to pinch the butt she’d wiggled into a pair of tight jeans.

“I’m in a bind. Unless you help out…” Mary paused for dramatic effect while her blue eyes filled with tears. “The entire event will be a failure.”

Bridget couldn’t help herself. She laughed. “Nice try. Tonight will be a great success. You’ve done an excellent job, like you always do.”

The venue’s ballroom was filled with Houston’s elite, seated around banquet tables, dressed in clothing no doubt purchased just for the occasion. A four-piece band was playing a Frank Sinatra tune, and a couple—a man in a tuxedo and a woman in a long black gown—glided across the dance floor.

In honor of the event’s theme, Puttin’ on the Ritz, pictures of the New York City nighttime cityscape were projected on the walls. And now that the dessert dishes had been cleared, energy buzzed in the air.

A Houston news crew was positioned near the stage, in the long shadow of Lady Liberty herself. A society reporter scribbled notes and smiled like a politician angling for office. Half a dozen servers moved through the area with champagne, and the bars, where hard liquor and cocktails were offered, had people lined up in front of them.

“Someone needs to fill in for Carmen,” Mary insisted.

“I knew I could count on you.”

“Oh, no.” Bridget held up her hand as a physical barrier to keep Mary’s enthusiasm from sweeping her away. “That person will not be me.” Uncomfortable because her absence was causing a burden on the other bartenders, Bridget said, “Look, I’ll write you a check. Including all my tips for a month.”

“No offense, but I can sell you off for a whole lot more than what you make in tips.”

Bridget scowled, debating whether or not her feelings were hurt. “I doubt it. For the love of God, no one wants to be with a bartender.”

Mary had the good grace to wince as she no doubt remembered that Bridget had been dumped by an ex who couldn’t put up with her profession. “Plenty of men are attracted to you. You’ll see.” Her voice contained reassurance and belief. Then she smiled and the whole damn room lit up. “Please, Bridget. This isn’t about you, but rather the good you can do in the world.”

Bridget was torn between sighing and rolling her eyes. As a child, Mary had brought home every stray dog and cat she’d found. She would cry at the store if she saw a stuffed animal that was missing a foot or an ear. The tears would only stop if their parents relented and bought it for her. All of them still indulged her tender heart and cause du jour, but enough was enough.

Unlike her sister, Bridget hated to be the center of attention. She wanted her private life kept private. Besides, she wasn’t sure she could stand the humiliation of knowing she’d fetched less money than anyone else. How could she compare to the beauty queens and cheerleaders? “The answer’s a definite, positive no.”

The lines in front of the bars grew longer.

“For the last time, I am not getting on that stage to be auctioned off.”

“How bad could it be? A guy makes a huge donation to Children First. You get a night out, he gets your company, and some deserving kid who is short on opportunity has a shot to go to college. Just think of it. A couple hours of your time and you can do so much good.”

“Find someone else.” Someone who wasn’t dressed as a service worker.

“You’re going to raise thousands.” Bridget squeezed Mary’s hands. “Tens of thousands. And you don’t need me to do it.”

Bridget danced a small jig on the way back to her position behind one of the bars. All in all, she’d gotten away unscathed. She’d expected it to cost her at least two months’ tips. Maybe Mary was softening.