Spotlight: Something Borrowed (Brides of Cedar Bend #1) by Lena Hart 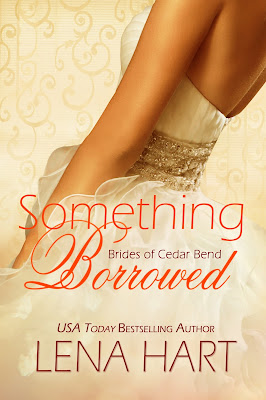 Resident bad boy Jackson Matoa is not very good at expressing his feelings. Especially when those feelings include an inexplicable desire toward his brother’s widow. And if the blow from his young brother’s death wasn’t enough to break him, the guilt of his unwavering lust for his sister-in-law just might...

Despite her best efforts, Truth Richards can’t seem to make sense of her feelings for her insufferable brother-in-law. She’s certainly not willing to admit just how deep those feelings run. With one phone call, Truth finds herself returning to Cedar Bend and forcing her way back into Jackson’s life.

Yet with the pain of their loss still fresh, can these two broken hearts borrow each other’s strength to find happiness with each other? Or will their guilt and grief push them further apart?

His thick brows pulled together in a deep frown. “What kind of name is Truth?”

Her back drew up, but she tried not to let her irritation show. “What kind of name is…”

She trailed off, realizing he hadn’t given her his name. She paused, waiting for him to do so. When he continued staring at her expectantly, Truth waved her hand dismissively.

Warmth filled her cheeks, though she wasn’t sure why she was the one embarrassed. He hadn’t exactly been a delight himself.

“Listen, we started off all wrong,” Truth began. “I’m sorry I was rude earlier. Danny didn’t mention a dog or that someone was coming up here to care for her.”

The man studied her in that unnerving way of his. “Where is Danny, anyway?”

“His brother had car trouble. He went to pick him up.”

His mouth curved up in amusement. “Is that what he told you?”

Truth frowned. Danny was as honest and straitlaced as they came, yet this man’s words seem to suggest otherwise. “Is there something I should know?”

“Yeah. His brother is a no-good, son-of-a-bitch that got himself arrested for sticking his nose where it didn’t belong. Car trouble is the least of his problems.”

She sucked in a sharp breath. “How dare you?” She may not have met her brother-in-law yet, but she’d be damned if she’d let this guy talk about him like that. “I thought you were a friend?”

The man shrugged again. “Well, it’s true. And as much as I’d like to know why Danny brought one of his groupies here, I really don’t care. I’m tired and sweaty and done with this conversation.”

Before she could set him straight, the man walked around her and out of the kitchen. When he began peeling off his shirt, Truth’s mouth fell open and she started after him.

“Whoa! What do you think you’re doing?”

The man slung the shirt over his shoulder and turned to her, irritation plain in his dark brown eyes. But it wasn’t his eyes that drew her attention. The muscles that rippled down his tanned arms and across his sculpted abdomen held her mesmerized. She didn’t consider herself a shallow woman, but in that moment she wanted nothing more than to glide her palm over his chest and down his—

Truth blinked, and her gaze flew up to his. In place of his earlier irritation was a smoldering heat, hidden behind a sly grin. She shook her head and began babbling like an idiot.

Lord, what’s the matter with me?

His gaze raked over hers. “It’s just what?”

She shook her head, her face and body flooded with warmth. “Nothing. I was just…caught off guard.”

Lena Hart is a USA Today bestselling author of contemporary, suspense, and historical romances. She is best known for her passionate, heartfelt stories—no matter the setting. When Lena's not writing, she is either reading, researching, or conferring with her muse. To learn more about Lena and her books, visit www.LenaHartWrites.com