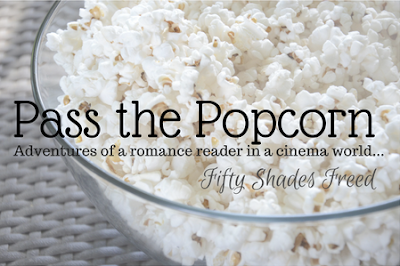 Hello friends! After 3 years of waiting, it's finally here... Fifty Shades Freed has finally arrived! Now I know that people tend to either love or hate the series, everyone is entitled to their opinion. Myself... I love the movies (more so than the books), so of course I was at the first showing at my local theater this morning with some of my fellow Fifty-lovers. My only regret was that had I had to see each of the movies by myself. All of my friends who love the movies are too far away and so I went all by my lonesome each time. It ended up working out since I treated each movie as a belated birthday gift to myself.

Anyhoo, I thought it would be fun to do a special Fifty Shades Freed edition of Pass the Popcorn. I'm also tempted to do more of a Fifty Shades of Grey trilogy chat when I get the final movie on DVD in a couple months.

Without further ado, Mrs. Grey will see you now and here are my thoughts on Fifty Shades Freed.

Let's be honest... It's been years since I've read any of the books in the Fifty Shades series. I can vaguely remember some of the bigger plot points in the three books, but most of the finer details are gone. So I'm not going to comment on the differences between the book and the movie. Although I will say that all of the scenes I hoped would be included are in the final movie. I was especially concerned about scenes between Elliot and Kate since we don't see much of them in the 2nd movie. The one moment I needed to see was there and I loved how it was done. 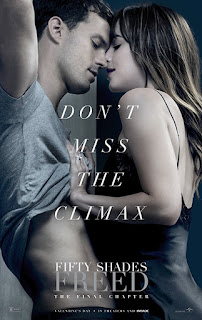 I loved the addition of Sawyer and Gia Matteo. What's not to love about Brant Daugherty? Even when he was creeping me out on Pretty Little Liars, he was still pretty dang hot. I don't remember if there were moments between his character and Hannah (Ana's assistant) in the book, but that was fun to watch in the movie. Hannah actually cracked me up in the few scenes we see her in. As for Gia, I've had a girl crush on Arielle Kebbel ever since I hated her character on Gilmore Girls. There is something about her acting that makes a great bitchy character... And I mean that in a good way.

No matter how many times I've seen the movies, the sex scenes never fail to make me blush. The sex in Fifty Shades Freed are still sizzling hot, especially a rather raunchy sex scene on the boat. What I liked the most about the movie is that Ana switched the tables on Christian when it comes to the more intimate moments of their relationship. As the movies progress, we see Ana becoming more and more comfortable with her sexuality, which culminates in a very sexy way in the last movie.

As far as the pacing goes, it did feel a bit rushed. There's really no way for the audience to know how much time has passed, especially when you think about how they've only known each other for a few months. With the movie, time passed even faster and I wanted a bit more. At an hour and forty-five minutes, Fifty Shades Freed is the shortest movie in the trio so there was definitely room to add a bit more. Since it's been so long since I've read the books, I can't comment on which scenes should have been included, it still felt as if there were pieces missing.

Overall, I really enjoyed the movie. I know that it's not for everyone and none of the Fifty Shades of Grey movies were made to win awards. They were made for the fans of the books and for the people that love the movies. If it managed to make the fans happy, which I think it did, then I consider it a success. I loved the addition of characters like Sawyer and Gia and that we get to see more of characters like Mrs. Jones and Hannah. I enjoyed the brief moments of suspense (I actually forgot about Hyde's accomplice until half way through the movie). I felt the movie could have been about 15 minutes longer, but overall, I was very happy with it. It was a great way to wrap up the trilogy.

What's next? Well, I will for sure buy the blu-ray DVD when it comes out in a few months. When it does, I will marathon the hell out of the three movies and possibly do a series review. I feel like I need to re-read the books before that, though. Fun fact, I like the movies more than the books so that'll be interesting.


What do you think? Are you a fan of the Fifty Shades of Grey movies? Did you like the books? Comment below and let's chat!