Review: The Color of Love (Blessings, Georgia #5) by Sharon Sala 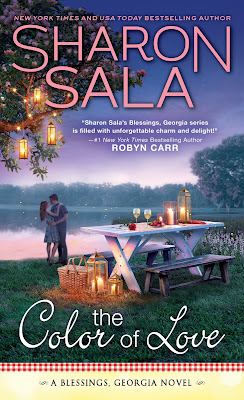 "You have no idea how happy it makes me to walk into this house and see you here." - Peanut Butterman

Welcome to Blessings, Georgia, the small town with a big heart! Anyone from a small town can tell you that gossip never stays quiet for long. The biggest news lately is Ruby Dye: she's been receiving gifts from a secret admirer. But Ruby isn't sure she can trust this newfound happiness. Nobody knows the dark secrets she keeps about her life before she arrived in Blessings. Is this the beginning of a would-be romance, or is she the target of something more sinister?

Everyone admires Ruby and her determination to do the right thing, especially local lawyer "Peanut" Butterman. He's finally ready to tell her how he feels. But when trouble arrives on Ruby's doorstep and their little town is threatened, Peanut may have to prove himself in ways he never imagined.

It has been years since I've read a Sharon Sala book. She was one of the first romance authors I picked up. I remember loving her contemporary romances and her romantic suspense she wrote as Dinah McCall. I don't know why I stopped reading her books, but it happened around the time of the purge from hell.

Lately I've been coming across her Blessings, Georgia series and I was intrigued. Would it spark something? Would I remember her writing style? While The Color of Love did spark a renewed interest in Sala's writing, I still can't remember what I originally loved about the books I did read. I can't tell you if her style has changed over the years, but I can say that I did enjoy the mix of styles it is now. The Color of Love was a mix of romance, women's fiction, and a bit of religion all rolled into a sweet story. There were times when it felt like there was too much going on, especially with all of the different POV's. There isn't just Ruby and Peanut. We also get the POV from just about every character. Which I think it could have distracted me from the romance between Ruby and Peanut had it not already played out in previous books. Coming into this series at the fifth book I did feel like I missed a lot of the friendship and what led to them professing their love. I did like the idea that the majority of The Color of Love is their relationship after the I love you's. What happens next isn't something we always gets to see in a romance and I was ecstatic that we get that in this book. Overall I thoroughly enjoyed the book. While I don't think I'll be going back to start the series from the beginning, I do want to read more of Sharon's books in the future. It's sort of like reuniting with an old friend.

Chief Pittman drove through town with lights flashing, then pulled into the alley behind the bar to the small, clapboard house.

There was no smoke coming out of the fireplace, no lights on anywhere inside, and when he saw the front door open and a tall, gangly boy and a huge bloodhound emerging, he jumped out to open the back door of his cruiser.

As he did, a woman followed them out. She was blue from cold and shivering. She coughed, then couldn’t stop. Then the boy approached and held out his hand.

Lon wondered how desperate they were and then decided to deal with that later.

“You can put your dog in the back and ride up front with me.”

“Yes sir,” Charlie said, loaded up Booger, then got into the front seat.

“Mrs. Conroy, I’m Chief Pittman. Thank you for allowing your boy to help us. I’ll have him back as soon as possible, okay?”

And then another little voice piped up, and Lon saw a tiny little girl standing in the doorway, also wearing her coat over her clothes. She was crying.

“I have to go,” Alice said, and ran back to the doorway, picked up the little girl and disappeared into the house, shutting the door behind her as she went.

Lon got in. The boy was already buckled up.

“Yes, sir,” Charlie said, his heartbeat jumping as the Chief drove away.

“So what’s going on at your house? Don’t you have any heat?”

“We don’t have any utilities, sir. We got cut off.”

“When was this?” Lon asked.

“Oh, a few days ago, but I’ll get the money earned to get them back on.”

“Is this why you put out the fliers?” Lon asked.

“That was very industrious. How old are you?” Lon said.

“I’m twelve, but I am the man of the family now,” Charlie said, and then turned his head

as they passed the school, looking at it with a mixture of longing and despair.

Another two blocks and he pulled up in front of the nursing home. One of his deputies was already there gathering info, while the other one on duty was back at the station. People were gathering here as the news had spread, ready to help search.

“Here we go,” Lon said, as he pulled up and parked. “You get your hound and follow me.”

“Yes sir,” Charlie said, and leaped out, grabbed Booger’s leash, and took off after the Chief.

Nathan Rose, the nursing home administrator, was trying not to panic as he explained what he knew to the Deputy, Ralph Herman.

“We’ve never had this happen before,” Nathan said. “We lock the doors at night and everything. Wanda is the one who discovered her absence.”

Ralph eyed the aide in purple scrubs. She looked to be in her late twenties, and she also looked scared to death, like someone was going to lay the blame of this on her.

“So, Wanda, how did you know she was missing?” Ralph asked.

“She wasn’t in her bed when I came on duty at six a.m., so I went looking for her, assuming she’d just fallen asleep somewhere else inside the building. They do that sometimes, but I couldn’t find her. That’s when we all began to search. She’s not here.”

“Were there any unlocked doors?” Ralph asked.

“The one from the kitchen leading out into the back alley. There’s an extra lock up high. She’s so little, I don’t know how she reached to open it.”

“Either someone helped her, or it was unintentionally left unlocked,” Nathan said. “It’s the only explanation.”

“Have you notified her next of kin?” the deputy asked.

“She doesn’t have any,” Nathan said. “She brought herself here three years back and hasn’t had a visitor from outside Blessings, since.”

At that point, the Chief walked up and didn’t waste time explaining.

Nathan saw the boy and the bloodhound and didn’t ask questions.

“Wanda, you heard him. Bring something that will have Gertie’s scent on it.”

Wanda turned and ran into the building as the deputy recognized the boy.

“Hey, that’s the kid from the flyer,” he said, then glanced at Lon. “Good call, Chief.”

“If it works, we can all thank Peanut Butterman. It was his suggestion.”

Charlie had outgrown his coat months ago, and had been wearing his Daddy’s clothes all winter, but he didn’t have a coat. It had burned up in the explosion. He shivered slightly as he waited, thinking nothing of the discomfort because it had become the norm, but Lon saw it.

“Be right back,” he said, and jogged toward his cruiser, popped the trunk and then came back with a heavy, fleece-lined flannel jacket. “Put this on,” he said, as he handed it to Charlie.

Charlie didn’t argue. The warmth that enveloped him was so welcome it brought tears to his eyes.

“I thank you,” Charlie whispered.

Lon patted the boy’s shoulder as Wanda came running back holding a pair of cotton socks.

“Gertie wore these yesterday. They were still in her shoes. Will this work?”

Lon glanced at Charlie, who nodded.

“They’ll do just fine,” Charlie said, then glanced at Lon. “Are you ready, Chief?”

Lon glanced around at the small crowd of people who’d gathered to help search.

“We’re going to try this first before we send everyone out in differing directions. If some of you want to go home, you’re welcome. But if there are any who want to follow us and the hound, then fan out in a grid behind him and do your best to keep up.”

A few waved and headed back to their cars, but a good dozen of them stayed.

Lon heard one searcher call out.

“That hound won’t track. I reckon the rain has washed out her tracks and scent.”

“We’ll see,” Lon said, and watched as Charlie Conroy got down on one knee and shoved the socks up under Booger’s nose.

As he did, the hound began to whine, as if sensing he’d just be given a task.

The massive bloodhound lifted his head, sniffing the air, then put nose to ground and moved toward the back of the building with Charlie hanging onto the leash. The moment they reached the back door, Booger bayed.

“He’s on the scent,” Charlie cried, and off they went, through two blocks of housing, across the baseball field and then up into the woods, with the cops and the searchers behind them.

Sharon Sala is a long-time member of RWA, as well as a member of OKRWA. She has 100 plus books in print, published in five different genres – Romance, Young Adult, Western, Fiction, and Women’s Fiction. First published in 1991, she’s an eight-time RITA finalist, winner of the Janet Dailey Award, five-time Career Achievement winner from RT Magazine, five time winner of the National Reader’s Choice Award, and five time winner of the Colorado Romance Writer’s Award of Excellence, winner of the Heart of Excellence Award, as well as winner of the Booksellers Best Award. In 2011 she was named RWA’s recipient of the Nora Roberts Lifetime Achievement Award. Her books are New York Times, USA Today, Publisher’s Weekly best-sellers. Writing changed her life, her world, and her fate.