Review: When the Stars Come Out (Cottonbloom #5) by Laura Trentham 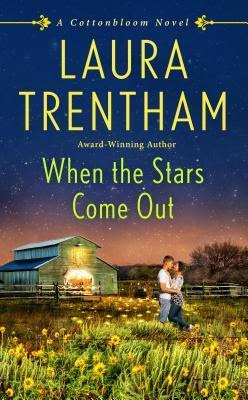 "I want you with me. It's just... I haven't had anyone to count on for a long time. It might take some getting used to." - Willa Brown

Cottonbloom. A beautiful, faraway place where a woman can escape her past—and find reason to stay forever. . .

Willa Brown never planned to stay in Cottonbloom. She was on the way to somewhere else when she landed there and found work at the Abbot brothers’ garage. . .and a sense of comfort and safety that she had never known. The same holds true for Jackson Abbott himself. With one glance in her direction, he can make Willa’s heart melt. But what begins as an unrequited crush turns into something far more powerful than Willa could have ever imagined. . .

Jackson’s most meaningful relationship has always been with his car—and he’s not afraid to admit it. Still, he can’t help but become emotionally entangled with his new star mechanic Willa, who is definitely hiding some dark secrets of her own beneath the hood. Jackson desperately wants Willa to trust him, and to seek protection in his arms. But even as the two slowly surrender to their shared attraction, the danger lurking in Willa’s past remains a stubborn obstacle. Can she open up enough to give them both a chance at having real and lasting love?

Oh, my god. I've never had such a visceral connection with a character like I did with Willa.

Let me set the scene for you...

I'm reading one night when I decide to listen to a little bit of The Greatest Showman soundtrack. I get to a particular scene in When the Stars Come Out just as I get to the song This is Me. Cue the waterworks because I ugly cried. The lyrics in the song fit Willa's emotions during that scene perfectly. Willa is so used to being on her own and when Jackson swoops in wanting to protect her, she doesn't know what to do. Jackson only has her best interest in heart, but Willa desperately wants to maintain her freedom. She is constantly doubting herself and Jackson just wants her to know that she's worthy of love. The scene with the addition of the song... It's a good thing this happened when the house was quiet because I sobbed. I know the book was written way before the movie even came out, but I've never experienced a connection between a book and a song this strong before. These lines in particular...

After just reading two books, I want Laura on my favorite authors list. I need to read her earlier books. I love her writing style. There were moments where I laughed out loud and moments that made me tear up. Her characters are so friggin' adorable. Willa... I wanted to be her friend. I loved how Jackson's family rallied around her. Jackson will for sure be one of my favorite book boyfriends for 2018. Everything about this book was so friggin' good.

An award-winning author, Laura Trentham was born and raised in a small town in Tennessee. Although, she loved English and reading in high school, she was convinced an English degree equated to starvation. She chose the next most logical major—Chemical Engineering—and worked in a hard hat and steel toed boots for several years.

She writes sexy, small town contemporaries and smoking hot Regency historicals. The first two books of her Falcon Football series were named Top Picks by RT Book Reviews magazine. Then He Kissed Me, a Cottonbloom novel, was named as one of Amazon’s best romances of 2016. When not lost in a cozy Southern town or Regency England, she's shuttling kids to soccer, helping with homework, and avoiding the Mt. Everest-sized pile of laundry that is almost as big as the to-be-read pile of books on her nightstand.