Review: His to Claim (Forbidden Lovers #2) by Shelly Bell 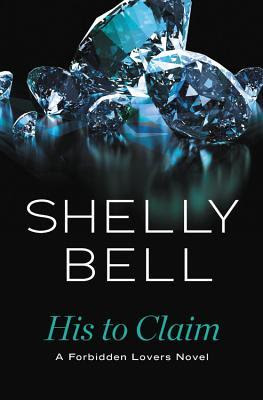 "Grab on to the blanket, dirty girl, 'cause I'm about to give you the ride of your life." - Ryder McKay

Fate brought them together. Family could tear them apart.

Ryder McKay may be a playboy, but he’s never been a fool. Not until he met the woman he simply knew as Jane. For one night, he dropped his guard, but in the morning she disappeared—along with a copy of his top secret technology.

When it ends up in the hands of his biggest enemy—his father—Ryder knows without a doubt he’s been betrayed. And when he finds Jane again, a year later, he can’t decide what’s worse—that her mother is marrying his brother, or that he still finds Jane irresistible, despite the fact that she’s a liar, a thief, and his father’s latest protégé.

Jane Cooper does have a secret, but it’s not the one Ryder thinks. As their rekindled passion changes into something deeper, they’ll have to work together to untangle a web of lies and corruption that will shatter everything they thought they knew about their pasts. Because Jane’s not the only one with a secret—and this secret is getting people killed.

Excuse me while I loose my shit for a second, but I fucking loved His to Claim. There, I feel better. I didn't think it was possible for Shelly to top At His Mercy, the first book in her Forbidden Lovers series, but she did. His to Claim was amazing. First of all... Ryder. If you're like me then you probably fell in love with him in the first book like I did. Jane wasn't who I originally wanted him with, but she was perfect for Ryder. The push and pull between them was magical. I loved that Jane dared to push his buttons. From the moment they met the year before, life changed for both of them and they couldn't have been with anyone else.

I love that with Shelly's books nothing feels like an afterthought. The sex is as intricately woven into the story as the suspense. In other words, His to Claim was the perfect mix of sex and suspense. Neither out-weighed the other. Simply amazing.

Shelly Bell is the author of the popular Benediction and Forbidden Lovers series. Her book, Blue Blooded, received a Top Pick from Romantic Times Book Reviews and was nominated for an RT Award. At His Mercy, the first in her Forbidden Lovers series, was named a Top Pick from Romantic Times and received a starred review from Publisher’s Weekly. When she’s not working her day job, taking care of her family, or writing, you’ll find her reading the latest romance or thriller. Shelly is a member of Romance Writers of America and International Thriller Writers.