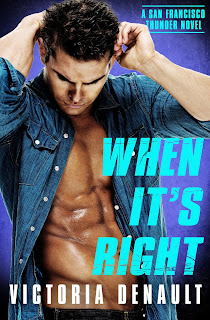 With the Stanley Cup playoffs winding down, I feel like we hockey-lovin' romance readers need a bit of a pick-me-up. Especially if you're like me and your team was eliminated in the 1st round. Nope, I'm not still bitter by that at all...

Sorry, back to the topic...

I am super excited to help the lovely Victoria Denault reveal the cover to When It's Right, the 3rd book in her widely popular San Francisco Thunder series. I am a bit late to the party so you've probably already seen the cover, but hey... Those abs are worth another look. Am I right?

I cannot wait to read Sadie's story. We've gotten to know her in the first 2 SFT books and it's time for her to shine in the spotlight. And Griffin? As much as I love my hockey players, I always get stupidly excited when it's the coach that finds love. We don't get nearly enough coach heroes and I want more!

Until then, who are you rooting for in the Stanley Cup finals?

IT'S ALL A MATTER OF TIMING

Griffin Sullivan is handling the ultimate balancing act. Between being a single dad to an active six-year-old and the crazy demands of his job as a hockey coach, finding love is not in the cards. But when the team's goalie is rushed to the ER, he's immediately captivated by the gorgeous, sassy nurse on duty... who just happens to be the sister of one his players.

Sadie Braddock has always had a big, open heart and a bit of a wild side. But since her dad got sick, she's closed herself off to life and love. Relationships are way too complicated - and so is Griffin. He's also funny and tender and sexy as hell. How can something that feels so right come at the worst time ever? Then again, someone to lean on may be exactly what they each need - if they're only brave enough to take the risk.

He’s used to winning, but now he’s playing with his heart.

Jude Braddock. Hockey god. That’s how everyone sees him now. But when they were teenagers, Zoey knew him as the kid who didn’t have enough nerve to make a move on their one and only disastrous date. Seems he doesn’t have that problem anymore, though. According to the rumors, he’s with a different woman every night. After a rough divorce, the last thing Zoey needs is more heartbreak. But Jude’s cocky, playful attitude is mighty hard to resist.

Jude knows he isn’t built for long-term relationships. But he’s getting sick of women pounding on his door in the middle of the night looking for a rematch. When Zoey comes back into his life, it’s like fate has given him a second chance. He’ll do anything to make her happy again. Is this what love looks like? He has no idea. All he knows for sure is that this time, he’s playing for keeps.

Not every goalie plays it safe…

As a publicist for the San Francisco Thunder hockey team, Dixie Braddock is too busy rescuing the players from trouble to get into any of her own. Except, of course, when it comes to the super hot new goalie. Because when a guy’s kiss curls your toes and sets your heart on fire, how the hell do you just walk away? But if anyone ever catches them together, she’ll lose her job faster than any slapshot.

Eli Casco is on the brink of having everything he ever wanted. He’s finally been called up from the minor leagues to play on a championship team. And he just had the most mind-blowing night with the woman of his dreams. But now that he’s an official Thunder player, Dixie is determined to keep her distance. None of the fame and fortune means anything to him without her to share it. If he truly wants Dixie in his life, it’s time to throw down his gloves and put everything on the line.