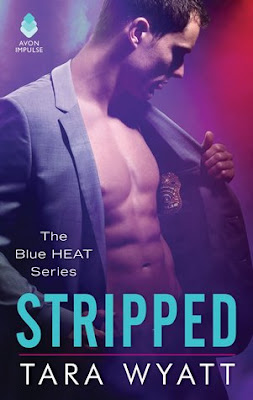 "You're adorable when you're frustrated." - Sawyer Matthews

Detective Sawyer Matthews isn’t just having a bad day—he’s having the worst day. His hunt for the criminal who killed his team member has stalled and now… he’s got to play nice with his new, totally unwanted partner. It’s not that she isn’t qualified, or that he doesn’t like her—it’s because he knows what she looks like naked. So very, very naked.

Brooke Simmons finally landed her dream job working for H.E.A.T, an elite undercover detective squad, and she’s not giving up simply because she had a one-night-stand with her sullen—but undeniably sexy—new partner. They’ll just have to keep it professional. Easier said than done, considering their first case requires Sawyer to infiltrate a drug cartel operating out of a male strip show. Watching him do his best Magic Mike impression every night isn’t just hot—it’s torture.

Sawyer doesn’t need any distractions, yet his attraction to Brooke is explosive and he can’t resist going for round two. Or three. Or four. But as their investigation progresses and danger mounts, they’ll have to put their jobs, hearts, and lives on the line to fight… for each other, for survival, and for justice.

I have been wanting to read one of Tara Wyatt's books for quite some time now and I have several of her books on my TBR mountain. When I first read the blurb for Stripped my immediate thought was that there's no way I'm missing this one. Gotta admit, Stripped was one hell of an introduction!

Not going to lie, Tara originally had my attention the moment she mentioned Magic Mike. I can't believe I'm about to admit this... But I've never seen the movies. I know, I know! For shame, Crystal. I really wanted to see how Tara managed to bring in the heat from Magic Mike into her romantic suspense. Gotta say, she did a damn good job intertwining the Magic Mike dancing into a fantastic suspense. Although, as much as I loved imagining Sawyer grinding, I friggin' loved Brooke's responses to his dancing. I could totally put myself into her shoes and I'd have the exact same response. I don't know how she kept her cool while watching him on stage. That would test anyone's strength. I loved the sexual tension and and chemistry between them. It ignited from the very beginning and kept scorching up my Kindle until the very end.

Now that I've had my first taste of Tara's writing style, I need more! I read the blurb for the 2nd book in the Blue HEAT series and it sounds amazing. Romantic suspense meets Kindergarten Cop? Yes, please! I have a feeling Tara will make it on my list of favorite romantic suspense authors in no time.

Tara Wyatt is a contemporary romance and romantic suspense author. Known for her humor and steamy love scenes, Tara's writing has won several awards, including the Golden Quill Award and the Booksellers' Best Award, and has been nominated for the prestigious RITA® Award.

When she's not hanging out with your next book boyfriend, she can be found reading, watching movies, and drinking wine. A librarian by day and a romance writer by night, Tara lives in Hamilton, Ontario with the world's cutest dog and a husband who makes all her of her heroes look like chumps.

Posted by CrystalBee at 9:03 PM