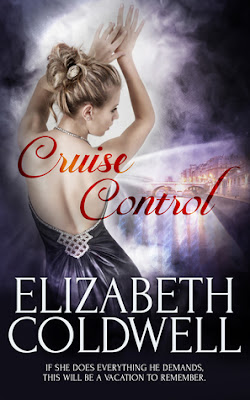 If she does everything he demands, this will be a vacation to remember.

Lily Jameson has always hated the idea of going on a cruise. As far as she’s concerned, they’re something you do when you’ve retired. So when her husband Daniel surprises her with tickets for a cruise down the River Seine, she isn’t impressed. What she doesn’t realize is that he’s planned the trip as an opportunity for them to act out their Dom/sub relationship in a semi-public setting, and he’s going to control every aspect of the cruise, from the clothes she packs to their activities on board.

Publisher's Note: This book has previously been released as part of the Sensory Limits anthology with Totally Bound Publishing.

I've been in the mood for some sexy novellas and short stories. Sometimes a girl just needs a little sexy time as a bit of a breather from full length books. For the next month or so, I'm going to be reading some anthologies from Totally Bound. I don't plan on reading each anthology straight through, so I'm going to do separate reviews for each novella. I'll come back later with the full review/discussion.

Elizabeth Coldwell's Cruise Control was a fun novella. I enjoyed the author's writing style. Her sex scenes are fantastic. Of course it is a novella, so you don't get to spend a lot of time with the characters. I liked Daniel. I loved the idea of him taking the reigns of their vacation. That was kinda hot. I had a more difficult time getting to know Lily. It wasn't until she finally loosened up that I started liking her character. It took a bit, but we get there. Plus the scenery was amazing. I would love a cruise like that. All in all, I enjoyed Cruise Control for what it was - a short and sexy novella.

Daniel surprised me with my present as I sat eating breakfast in the conservatory. “Happy birthday, darling.” He pressed a kiss to my cheek and set a plain white envelope in front of me.

“Thank you.” I’d been dropping hints about the stunning diamond earrings I’d seen in the window of the jeweler’s shop on the high street, so I tried to hide my disappointment as I placed my coffee cup back on the table. Using my butter knife, I slit open the envelope. Inside was a printed sheet of paper. I glanced at it, realizing it was some kind of travel document. Once I’d skim-read it, I cast my gaze up to Daniel’s handsome, impassive face. He was the master of giving nothing away. “This is a…cruise ticket.”

“Wow, I don’t know what to say.” Of all the things Daniel could have bought me, this was the most unexpected. I only wished it was more welcome.

“I thought it would be nice to have a few days away. After all, when was the last time we took a holiday together?”

I considered his question for a moment. “I don’t remember, unless going up to Edinburgh for your sister’s wedding counts.” He shrugged in a way that suggested it didn’t, and I went on. “But why a cruise? You know how I feel about those things. They’re what you do when you’ve retired—when you have the time to spend a couple of weeks doing nothing but ballroom dancing, playing bingo and watching awful cabaret nights hosted by some comedian who won a TV talent show thirty years ago.”

“This won’t be like that, Lily. It’s a three-day trip down the Seine to Rouen and back. And there’s an option to spend an evening in Paris. We could have dinner in an intimate little bistro or wander along the riverside by Notre-Dame. The city is so beautiful when it’s lit up at night.”

A stop-off in Paris, I had to admit, did sound romantic. “I suppose that isn’t so bad.” I glanced back to the ticket. “But this says we’re scheduled to depart this evening.”

“That’s right. So hurry up and finish your breakfast, because you have some packing to do.”

Immediately, my thoughts raced to what I’d need to take with me—and not just in terms of what I planned to wear. This would be the perfect opportunity to catch up on a couple of manuscripts that needed to be assessed.

As if he’d read my mind, Daniel added, “And no taking any work on this trip. This is all about us, not our jobs. Understand?”

I nodded and popped the last bite of croissant into my mouth. He might have won this round, but he wasn’t going to get his way for the whole weekend. I was sure of that.

I took a shower, then went into the bedroom to select the clothes I wanted to take with me. Daniel had told me the dress code was smart casual, though I’d need to pack an evening dress as we’d be dining formally one night. I hunted out a couple of pretty tops, comfortable leggings, my favorite little black dress and a floor-length, halter-neck gown decorated with hundreds of tiny crystals that I’d bought for a company dinner I’d attended with Daniel. As I hesitated over adding a bikini to the pile of clothing—Daniel had mentioned the boat had a pool, though in late September I doubted the weather would be warm enough for swimming—he walked into the room.

I turned to see him shaking his head. He wore a disapproving expression and I wondered what I might have done wrong.

“Is there a problem?” I started rolling one of the tops into a neat sausage shape, ready to stow in my case.

“We’re going to be away for three whole days and we’re getting away from everything.” He came to join me by the bed. “No work, no checking emails, no responsibilities. And that means we’ll have plenty of time to ourselves. Plenty of playtime.”

Playtime. I knew what that meant. From very early on in our relationship, I’d known that Daniel had a dominant streak, in and out of the bedroom. It was one of the things that attracted me to him, as it dovetailed so well with my own desire to submit. I loved it when he took control, though a schedule that often saw him traveling over to the United States and back on business meant it didn’t happen nearly as much as either of us would like. Now I began to understand why he’d chosen a holiday as my birthday surprise, but that still didn’t explain what I’d done to earn his displeasure.

“From the moment we step on board that ship till the time we disembark, I am going to be in charge,” Daniel stated. “I shall decide what you eat, where you go and what activities you take part in.”

As I listened to his low, commanding voice, my pussy grew wet. I’d often fantasized about giving him total control, if only for a short period of time, and now it seemed he wanted to make those fantasies come true.

“I shall also have the final say on what you wear,” he went on. “As such, you won’t be taking these.” He picked up the leggings and went over to the closet. Once he’d hung them neatly back on their hanger, he took out a couple of skirts. “I want to see you in these instead.”

“Yes, Sir.” The word slipped from my lips almost without my being aware of it. When Daniel was in full dominant mode, even if we weren’t acting out a scene, I couldn’t help but respond. I wanted him to know I was eager to obey but also needed to gauge where the boundaries lay so I could push at them.

“And you won’t be needing these, either.” He sifted through the lingerie I’d chosen and plucked out all the panties. I’d gone for scanty, gossamer-thin pairs that I’d thought would tease and excite him, but he seemed more turned on by the thought of my going bare beneath my outer clothing—as, though I hated to admit it, did I.

“But, Sir…” I made a token show of resisting and tried to snatch the underwear from his hand. “One of those skirts you’ve chosen is quite tight-fitting and the other might fly up in a high wind. Won’t people notice I don’t have anything on underneath them?”

His smile reminded me of the big bad wolf. “That, my girl, is the point.”

“Anything else, Sir?” I eyed the rest of the garments on the bed, conscious that we needed to leave soon if we were to reach Southampton in time for the two o’clock check-in.

“I don’t see a swimming costume. You’ll need it if we spend any time in the ship’s spa. Take that nice polka-dot one. I love the way it shows off your ass.”

With that, he strode into the en suite, leaving me with an urgent, unsatisfied ache between my legs as I set about packing.

Find her online at The (Really) Naughty Corner, http://elizabethcoldwell.wordpress.com.

Posted by CrystalBee at 8:19 PM