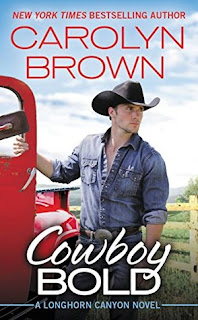 Hello friends! Are you ready to meet May's Cowboy of the Month? From Carolyn Brown's newest book, Cowboy Bold, say hello to Cade Maguire! I'm nearing the half-way mark of Cowboy Bold and I have to say, Cade is quite the gentleman. I mean, c'mon... The man opens his ranch to dozens of kids. How can we resist that? Once you meet him, I know you'll fall for Cade too.

If your best friends had to pick four words to describe you, what would they pick? Friendly, hard-working, fun-loving, wary of relationships.

What are you passionate about? Ranching and family.

Describe a typical Friday night. You’ll find me at The Rusty Spur, a bar where I hang out with my brother, Justin, and our foreman and best friend, Levi, on Friday and/or Saturday nights. We like to drink a few beers, listen to country music on the juke box and do some two steppin’, and if we get lucky, maybe take a pretty lady home with us.

What are three things you enjoy doing in your free time? Watching football games on TV or better yet attending a Texas Longhorn game. Working on our ranch, The Longhorn Canyon. That may seem crazy because work isn’t supposed to be fun, but my grandpa said that if you’re doin’ what you love then it’s not work, it’s pure enjoyment. And I love the summer when we host underprivileged kids at the ranch. I devote all my free time to them during those weeks.

What’s the last song you listened to? Favorite book? H.O.L.Y. by Florida Georgia Line. I don’t really have a favorite book but when I do have time to read it’s usually something by Louis L’Amour.

If you could go back in time and change one thing in your life, what would it be? I wouldn’t have gotten involved with Julie, my ex-fiance who broke off our engagement on the day of our wedding. That scarred me and I may never trust again.

What are you looking for in an ideal mate? If I ever get into another relationship, she will have to love ranching as much as I do. She’ll have to help me learn to trust again. Retta, the lady that I hired to be the girls’ counselor for the summer, is an amazing lady… but she’s got her heart set on going back to Dallas as soon as the kids all go home...

Cade hiked a hip on the porch railing and waited for Retta to go to the bunkhouse for her purse. Carrying a large cooler of iced tea in one hand and a sheath of disposable cups in the other, Levi backed out of the house. He took both to his truck, then turned around and came back.

“What’s goin’ on with you and Retta?”

“Okay, then. If you want to play it that way, I won’t get in your way,” Levi said. “Ain’t none of my business anyway.”

“What do you think is going on?” Cade asked.

“There’s chemistry. I can almost see the sparks dancin’ around  y’all,  and  when  you  look  at  her . . . well,  there’s something there that ain’t been since Julie,” Levi answered.

“Any more than between me and any of the sweet little blondes I meet at a bar?”

“Oh yeah, and this one ain’t goin’ home the next mornin’, Cade. Just remember that.” Levi settled his hat on his head. “Y’all goin’ to be home in time for dinner?”

“More than likely. How about you?” Cade said.

“Not me. Skip is bringing sandwiches out to the corral for me and the boys so we can keep working. There’s plenty of room for one more hand when you get back,” Levi said.

The dust from Levi’s truck had barely settled when he noticed a movement in his peripheral vision. Turning that way, he watched Retta making her way toward the house with Beau in front of her and Hopalong bringing up the tail end of the parade. Mavis always said that you can’t fool dogs or kids. If that was the truth, then Retta had definitely passed the test with flying colors when it came to the an- imals. When she reached the porch, she sat down on the bottom step, picked Hopalong up and kissed him right on the nose, and then scratched Beau’s ears.

“You guys hold down the fort.” She stood to her feet and turned toward Cade. “Do you know the girls’ names that I’ll be getting?”

“Not until they get here. We just know that there will be four boys and four girls and that Benjy is one of the boys.” He opened the truck door for her. “Why did you ask?”

“I’m going to buy each of them a little welcoming gift. If I knew their names I’d be able to personalize it.” She put her purse on the floor and fastened the seat belt.

See there. If I was really interested in her, I would have taken care of that seat belt for her, Cade thought.

“That’s pretty nice of you,” Cade said as he got into the truck. “But it’s really not necessary.”

“When my Sunday school class went on retreat, I always did this and it works two ways. It makes me feel good to do something for them and it shows them I’m interested in them,” she said.

After only two days, he could already tell that Retta was an amazing woman. She fit in with Mavis and the guys. Beau and Hopalong loved her. And now she was buying presents for little girls that she hadn’t even met. Maybe Levi and Justin were right—the chemistry between them might be more than fun flirting and a flash in the pan. But—and there always seemed to be one of those when  he  thought  about  relationships  of  any  kind—if he was totally truthful, he wasn’t over Julie. Sometimes he thought he was, but when just a simple memory of her carrying a quart of tea shot pain through his heart, then he had to be honest and admit that he had not completely moved on.

“Did you hate living in the country? Is that why you moved to the city?” He drove slower than usual so he’d have more time to talk to her.

“You wouldn’t understand.” She turned to look out the side window.

“When you were in high school, what were your dreams?” she asked.

“I wanted to be a pro-football player. I got a scholarship to play for the Longhorns, and that set me on my way. The first couple of weeks were fine in the city, but then I got homesick for the strangest things. Like the sound of crick- ets and tree frogs, the smell of a roast in the oven. When I realized I’d rather be stretching barbed wire than throwin’ a football down the field, I changed my dreams and my plans,” he said.

“You been back to your class reunions?”

“Two.” He nodded. “The five-year and then the ten-year a couple of years ago. Have you?”

She shook her head. “I got put down in high school. I was too tall, not thin enough, not pretty enough, not rich enough—you name it, and I fell short of the mark except when it came to playing girls’ football. So I made up my mind that I was going to get a fancy job in the city and when I came back to Waurika for a class reunion . . . ” She paused.

“That you’d show up in a low-slung sports car, wearing designer clothes, and show them all that you’d made it?” he asked.

“But did you really love the city once you reached that goal?”

One shoulder popped up in half a shrug. “Liking or loving is a luxury. I threw myself into my work and didn’t think about anything else.”

“Then your dad got sick, right?” He parked at the tractor supply place but didn’t make an attempt to get out.

“Yep, and I reassessed everything a dozen times. I knew from day one I’d lose the farm and accepted it. That meant I’d be going back to the city to work and I accepted that. It’s all in the mind-set, Cade. You do what you got to do for survival,” she answered. “We’d better go get whatever you need for that tractor. What’s the matter with it anyway?”

“The one I’ll be working on needs a tune-up,” he answered.

“I can help with that.” She got out of the truck and was halfway across the parking lot before he caught up with her.

“Are you serious? You know how to work on tractors?”

The automatic doors swung open and he stepped to the side to let her go first. “I’d appreciate the help. When I get ready to work on it, I’ll give you a call?”

He shouldn’t compare because they were two different women with two different backgrounds and lifestyles. But Cade couldn’t fathom Julie ever even going into a tractor supply store much less knowing where to go once she was inside or worse yet, getting her hands dirty working on a tractor.

One city girl, one die-hard rancher, and eight mischievous kids. What could go wrong?

Every summer Cade Maguire looks forward to opening his Longhorn Canyon Ranch to underprivileged city kids. But this year, he’s having no luck finding a counselor for the children-until Retta Palmer walks through his door.

Flat broke after selling everything she owns to pay her father’s medical bills, Retta is thrilled to hear of an opening for a counselor position. She’s not as thrilled about the ranching part, or the sexy cowboy with beautiful blue eyes who’s her new boss.

After being left at the altar two years before by his fiancée, Cade isn’t sure he can take another heartbreak. And Retta isn’t even sure she wants to stay. But the sparks between them are absolutely undeniable. And with a couple of lovable kids and two elderly folks playing matchmaker, Cade and Retta may find that the best way to heal is with each other.

Carolyn Brown is a New York Times and USA Today bestselling romance author and RITA® Finalist who has sold more than 3 million books. She presently writes both women’s fiction and cowboy romance. She has also written historical single title, historical series, contemporary single title, and contemporary series. She lives in southern Oklahoma with her husband, a former English teacher, who is not allowed to read her books until they are published. They have three children and enough grandchildren to keep them young. For a complete listing of her books (series in order) check out her website at CarolynLBrown.com.

Posted by CrystalBee at 1:24 PM