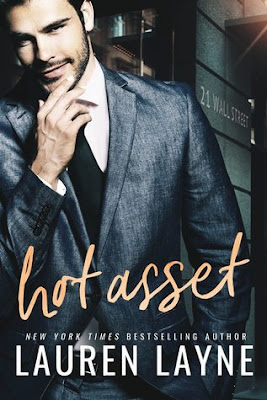 "You want to play sexy cat and mouse, I can play right back, and I'll win." - Lara McKenzie

Ian Bradley is the definition of a Wall Street hotshot: seven-figure salary, designer suits, and a corner office. His drive off the floor is just as potent. Every woman who knows him has felt the rush. But now he’s met his match in Lara McKenzie—a woman with the power to bring Ian to his knees.

An ambitious, whip-smart daughter of FBI agents, Lara is a rising star in fighting white-collar crime. Her latest case—the investigation of Ian Bradley for insider trading—could make her career. She knows a scoundrel when she sees one. Ian fits the bill: a cocky, ridiculously handsome bad boy with a slick swagger.

When it comes to office romances where the sexual tension between adversaries threatens to ignite your book, nobody does it better than Lauren Layne. I loved Layne's Oxford series and I was stupidly excited when I first came across the new 21 Wall Street series. The office hunks are back!

I friggin' loved Hot Asset. Lauren Layne + office romance + enemies-to-lovers = one hell of a good time! I don't even know where to start. Watching Ian stumble off his womanizing pedestal was fabulous. At first I didn't like his reaction towards Lara when he reduces her to a sex object. I hated that he originally thought he could sweet talk her into giving him information. Once he realizes that Lara is a woman that won't give into his advances, Ian starts to see her for the strong woman that she is. I may have gotten weak in the knees meeting Ian for the first time, but it was when he started to see the true Lara that I started to fall for him. Lara, on the other hand, had me in her corner from the get-go. She's quiet and a bit mousy, but don't let that fool you. Lara is bad-ass and determined to succeed in her dreams of being a FBI agent. She won't let people railroad her and I loved that about her.

I devoured Hot Asset and loved every damn page. There's something about Lauren's writing style that sucks me in from the very first chapter. The sparring and verbal foreplay between her characters is always so much fun to watch. The sexual tension and chemistry between Lara and Ian sparks almost instantly. Yum-tastic! Loved it.

Lauren Layne is the New York Times and USA TODAY bestselling author of more than two dozen romantic comedies. Her books have sold over a million copies, in eight languages. Lauren's work has been featured in Publishers Weekly, Glamour, The Wall Street Journal, and Inside Edition. She is based in New York City.