Review: Rumor Has It (Real Love #4) by Jessica Lemmon 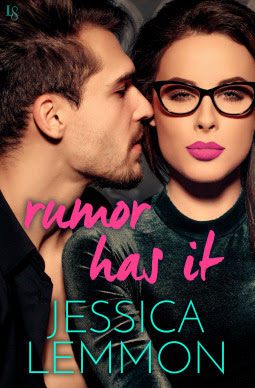 "You can tell a lot from a kiss, Kitty Cat. Even one without tongue." - Barrett Fox

This is one bad boy who’s fit to print.

Barrett: As a former pro football star, I’m used to playing the field. After injuries cut my NFL career short, my second act as a broadcaster ended on live television when a hot mic picked up a little verbal . . . indiscretion. But this latest publicity stunt might just land me back on top—much to the chagrin of Catarina Everhart, the prissy, beautiful journalist who’s been assigned to date a bad boy (i.e., me) and write about it. Catarina swears I’ll never touch her, let alone kiss those full lips of hers. Based on our chemistry, I’m not buying it. . . .

Catarina: Barrett Fox seems to be doing everything in his power to make me hate him. The cocky egomaniac is infamous for his bad behavior, and now, thanks to my boss’s harebrained schemes, he’s apparently my problem. As one fake date leads to another, I start to see a different side of Barrett. He’s close with his family. He does volunteer work. And, okay, he kisses like a dream. Am I really dating Barrett Fox? Or is he playing me? Because suddenly I’m risking my reputation—and my heart.

A little bit of real talk here... When I first came across Rumor Has It, I was stoked. It has been awhile since I've read one of Jessica Lemmon's books and I wanted to read it. The cover, title, and description were what initially snagged my attention and so I downloaded the book. When I did a bit more research as I was adding it to my schedule, I realized that it was actually the 4th book in Jessica's Real Love series. That's when I started to get a little hesitant. I didn't really like the first book in the series and I was afraid that I wouldn't like this one. Turns out I was worried for no reason.

Rumor Has It was a fun, bantered-filled romance between two characters that constantly butt-heads. I mean, who can say no to that? There were moments when I wanted to yell at Barrett. I think people call him the bad boy, but he's really not deep down. He has a short temper, which is mostly a product of his upbringing and having to deal with his brother. Which, I think would make anyone lash out. In a way, he's very misunderstood. I loved that he brought out the naughty side of Catarina. She was free to be herself with him, which is something she's never experienced. She's had to hide that part of herself from her perfectionist mother. And with Barrett, she can finally let her hair down.

I loved Rumor Has It. It was great picking up a Jessica Lemmon book again and I was happily surprised with this one. I enjoyed meeting Catarina and Barrett, as well as the background characters. I don't know if I'll give the first book a second try, but I do want to read the previous book.

Posted by CrystalBee at 9:20 PM