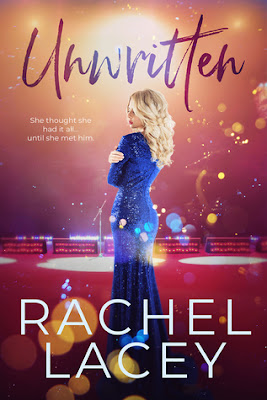 Pop sensation and Hollywood star Katherine Hayes has worked hard to maintain her squeaky-clean image. But with nude photos going viral on the internet, the ensuing smear campaign threatens to ruin everything.

A chance meeting with a handsome college professor–who’s adorably clueless about her identity–is a rare break from the stress. But when shocked recognition dawns in his eyes, her survival mechanism kicks in. She can’t simply let him walk away to add grist to the rumor mill.

Josh Randall has already loved and lost his soulmate. Yet when he witnesses Kate in a vulnerable moment, he can’t deny the pull between them. Even though he believes down to his bones that true love doesn’t come twice in a lifetime.

A no-strings fling sounds like the perfect solution. But Kate never expected Josh to see the woman hiding behind the celebrity–or that the paparazzi would catch on to their sizzling passion so quickly. Making it hard to keep their tangled emotions from tearing their hearts apart when it’s time to say goodbye…

Holy. Crap. Unwritten was amazing! I love romance books that feel as if they are secretly a saga. It doesn't feel as if there is a clear-cut beginning, middle, and end. Instead, Unwritten is a beautifully flawed romance woven together from the deepest depths of Josh and Kate's hearts. The journey these two characters go through was fabulous, both as individuals and as a couple. They had to learn so much about themselves and about each other.

Kate never had someone to lean on. Sure she had Jenn and the rest of her entourage, but it's not the same as someone who loves you unconditionally. Unable to truly let her guard down has taken an imaginable toll on her heath. When she comes across Josh, there's something in him that she's immediately drawn to. Unwilling to take no for an answer, Kate peruses him until he gives in. Kate broke my heart in so many ways. The shit she went through with her mom to suddenly finding out she has a half-sister, well I'm surprised she kept it together for as long as she did. I wanted to be her friend, her confidant. Someone for her to confide in that wouldn't be tempted to sell her secrets. We all take that for granted when it's something Kate never had until now.

After losing his fiance, Josh is convinced that she was his one true love and anyone else wouldn't measure up. He goes through life not willing to open his heart to the possibility of being broken again. When he meets Kate, he's not quite sure what to think. Sure, there's an attraction neither one can deny, but to be able to keep their feelings casual doesn't seem possible. They try to keep things simple with no strings. As hard as I fell for Josh, there certainly were moments when I wanted to slap the guy. Through everything, he kept me firmly in his corner. I loved the way he was able to get Kate to lean on him while he was fixing his own emotional baggage.

I adored Unwritten. Rachel Lacey is an author that has been discovering different voices and I've loved every one of them. Unwritten is so different from her previous books, but I think that's part of the reason why I enjoyed it so much. If felt as if I was discovering a whole new side of her writing. Loved it! And next we get Jenn's story? Yay! I can't wait.

Posted by CrystalBee at 8:19 PM