Review: Just You and Me by Wendi Zwaduk 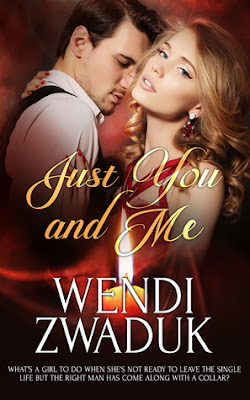 What’s a girl to do when she’s not ready to leave the single life, but the right man has come along with a collar?

Ryder Lucas didn’t come to Exposed looking for a sub. He joined his best friend’s club to demonstrate fetishes and enjoy the single life. Then he sees Cat and uses her for a scene. She’s everything he’s ever wanted in a sub and a woman. He won’t rest until the blonde bombshell is his.

Catharina ‘Cat’ McLean doesn’t want a permanent Master. She’s happy taking part in the occasional scene but won’t be collared. She’d rather be in control of her life. When Ryder asks her to be a part of a scene with him, she sees no reason to refuse. He’s tall, dark, handsome, and she can’t resist him. He knows how to play with her fetishes—wax, ice and bondage—but is she willing to submit to him on a full-time basis?

Who knew finding a heart’s desire would be this all-consuming?

Publisher's Note: This book has previously been released as part of the Sensory Limits anthology with Totally Bound Publishing.

Gotta say... I wished Just You and Me was a full length book. Or at least a longer novella. We're not with the characters for a long time, but I still felt a connection with them. In fact, I wanted to spend more time with Ryder and Cat. I wanted to watch Ryder slowly gain Cat's trust as they fall in love.

“So many playmates, but not the one I want,” Ryder muttered as he read the personal ads on the bulletin board. If he were writing his own advertisement, he would’ve said something along the lines of Wanted—a lover and a sub who can handle me. Same woman preferred. Must be willing to work with me, but rein me in, too. He snorted as he gazed out at the people in the main playroom of Exposed. The guests and members were great people, but in his six months there, he hadn’t found the right sub. Well, no… He had an idea of who he wanted, but he hadn’t had the chance to talk to her.

He leaned against the bar and toyed with his bottle of water. Just thinking about Cat sent the blood rushing below his belt. The sweet woman with the long blonde hair came to mind often. He wanted to caress her curves and sample her mouth. He’d heard she was into pain play and he’d watched a couple of her demonstration scenes. She turned him on and had him ready to combust each time he saw her. If she’d participate in a scene with him, he’d show her a good time. Hell, he’d show her she might be a good match for him, too.

Damian, one of the other Masters, strode up to him. He nodded once. “Ryder.”

“D.” Ryder stood tall. He hadn’t been at the club as long as Damian and was expected to defer to him. “How are you?”

“I’m fine,” Damian said, “but I’ve got a problem. There’s a writers’ group coming in at seven and they’d like a demonstration. One of the authors set it up with Sean, but the bastard left last week. He never bothered to let the group know that he wouldn’t be able to do the demo.”

“What does it involve?” He finished his water.

“Wax play. I don’t do that with Missy.” Damian notched his chin in the air. “You’re not coupled up. I’d ask you, but you don’t have a sub.”

“Positive.” He clapped Damian on the shoulder. “We’ll be there.”

“I should ask who you’ve got in mind, but I trust you,” Damian said. “I’ll have the playroom prepped. Playroom one. The supplies will be there and ready. All you have to do is show up. Is there anything you want in particular?”

“I’ll text you once the sub agrees.”

“Thank you.” He left the Master at the bar and headed toward the office. He’d wanted an excuse to speak to Cat and now he had one. He ignored the others in the room. Right now, the only one who mattered was her. A woman in a latex dress winked at him. He nodded once, but kept moving.

He frowned. He wasn’t even sure who she was, yet she’d waited on him? “I’m sorry. I’m not looking for a sub right now.”

“Sir.” She reached for him, but he sidestepped her. Besides her not being Cat, he wasn’t in the mood for someone so pushy. He ducked into the hallway leading to the office and paused to compose himself. He had to think before he spoke. If he demanded her submission, Cat wouldn’t work with him. He knocked on the door.

Her voice echoed in his mind. Ryder bit back a smile and twisted the knob. “Cat?”

“Right here.” She swiveled around in her seat. Her blonde hair shimmered in the fluorescent lighting. Glitter sparkled on her lashes and shoulders. The tank top barely contained her breasts. She smiled. “Ryder, hi. Did you need something? Let me guess. You locked yourself out of the staff computers again?”

“No.” He chuckled. She knew him. He’d become a pro at goofing up the password. He squared his shoulders. “I need to speak with you.”

“Oh.” She folded her hands on her lap and crossed her ankles. “Sir.”

She wasn’t his sub, but she treated him with the same respect. Fucking balls, I need to claim this woman. He tugged the only other chair up to hers and sat backward on it. “I need you.” He paused to gauge her reaction.

I always dreamed of writing the stories in my head. Tall, dark, and handsome heroes are my favourites, as long as he has an independent woman keeping him in line.

I earned a BA in education at Kent State University and currently hold a Masters in Education with Nova Southeastern University.

I love NASCAR, romance, books in general, Ohio farmland, dirt racing, and my menagerie of animals.

Posted by CrystalBee at 8:47 PM