Review: The One You Can't Forget (The Ones Who Got Away #2) by Roni Loren 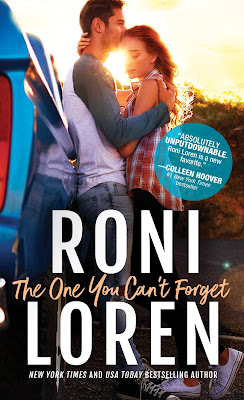 "So I show up in your dreams? Good to know. But this can't be a dream. Look, I'm fully clothed." - Wes Garrett

The One You Can't Forget
Series: The Ones Who Got Away #2
Author: Roni Loren
Publisher: Sourcebooks Casablanca
Published: June 5, 2018
Source: Publisher

The world admires her as a survivor. But that impression would crumble if people knew her secret. She didn’t deserve to be the one who got away. But nothing can change the past, so she’s thrown herself into her work. She can’t dwell if she never slows down.

Wes Garrett is trying to get back on his feet after losing his dream restaurant, his money, and half his damn mind in a vicious divorce. But when he intervenes in a mugging and saves Rebecca—the attorney who helped his ex ruin him—his simple life gets complicated.

Their attraction is inconvenient and neither wants more than a fling. But when Rebecca’s secret is put at risk, both discover they could lose everything, including what they never realized they needed: each other.

She laughed and kissed him. This morning she'd melted down. But somehow this man had her laughing and turned on only a few hours later. Everything inside her felt buoyed.

After falling wildly in love with the first book in The Ones Who Got Away series, The One You Can't Forget became my most anticipated read for the summer. I wanted the dive headfirst into the emotional romance the second it hit my Kindle. Let me tell you, it took strong willpower to not drop everything to immediately start reading this book.

Funny story... My friend Ezrah from (I Heart Romance & YA) and I went to celebrate The Ripped Bodice's 2nd birthday back in March. We both got lucky and snagged 2 tote bags filled with books and other goodies. What coveted print arc did Ezrah get? Yep... She's lucky I don't know where she lives or I'd go steal it. One day, Ezrah. One day...

Okay, back to the review...

Oh, my God. I knew The One You Can't Forget was going to be an emotional romance to the nth degree, but I had no clue it would be that freaking amazing. Wes and Rebecca are survivors. Twelve years ago, Rebecca was one of the few survivors of the Lone Acres school shooting. You would think surviving a tragic event when so many of your classmates didn't would be a heavy enough burden for Bec to carry. When we learn that she's been carrying a heartbreaking secret, readers learn that her survivor guilt runs so much deeper. When recent events threaten to pull her back under, it's Wes and the unconditional love of the stray dog that help Rebecca recover. After a brutal divorce that cost him everything, Wes went into a tailspin. He got lucky, though, and now he's on the bumpy rode to recovery with a new dream. A dream that he's working his ass off to hopefully achieve.

I fell hard for Rebecca and Wes. I'll admit, I was a little skeptical of Bec's love-ability as a heroine. After meeting her in the first book, readers don't really get the best first impression. As I got to know her more in this book, it's clear that she's greatly misunderstood. She's only known heartbreak and that weighs heavily on some of her actions. She's closed off because she's scared. When her secret is revealed, I wanted to hug her. It broke her and I ugly cried right along with her. Wes, on the other hand, I loved from the get-go. That man is gold. A chef that works with kids? Uh, yum. And he's sexy as hell. It was the two of them together that really sealed the deal for me. I loved their banter. I loved that it was their hilarious verbal foreplay that healed them. It gave both of them the freedom to express themselves differently. It brought light into what was a dark situation. I friggin' adored it.

I cannot rave more about The One You Can't Forget. Readers get more insight on what happened during the shooting, more specifically what led up to it. I think that's one of the reasons why this one was also far more emotional than the first book in the series, but in a way, it was also lighthearted. I loved that mixture. I hate that the wait for Taryn's book is so long, but it is already my most anticipated book for 2019.

Fifteen minutes. That was how long it took for Marco and Kincaid to abandon Rebecca and Wes in the kitchen under the auspices of Let me show you the view from Marco and Does this building have original details? from Kincaid.

Kincaid had motioned at Rebecca as she slipped out of the kitchen, some invented sign language that probably meant Talk it out with the hot chef but looked more like a drunken game of naughty charades.

Rebecca had promptly flipped her off.

But now here she was. Alone with Wes again.

Wes stood behind the large island, black bandanna keeping his hair back, gray T-shirt putting all that colorful arm ink on display, and forearms flexing as he sliced and diced an onion with practiced precision. If not for the simmering annoyance, it would’ve been a nice show to watch from her spot sitting on a stool on the other side of the counter. But he hadn’t said a word to her since they’d gotten into the condo. Just chop, chop, chop and irritated grunts.

“Do you need any help?” she asked for lack of anything else to say.

“Can you help me murder my brother?”

“I was thinking we could get rid of them both in one go. How far is the drop from the balcony?” Rebecca tapped her chin. “We could make it look like an accident. I know someone who could defend us.”

The little break in the wall helped her relax some. “Why’d you give in anyway? I was about to get us out of it. I had a whole argument prepared. There were bullet points. Closing statements. We could’ve saved ourselves this lovely moment.”

He frowned and dumped the onions into one of the prep bowls. “Yeah, but you didn’t see the look on my brother’s face.” He pushed a basket of strawberries and a paring knife toward her. “Can lawyers hull strawberries?”

“Sure.” She took the berries and stole one of his empty prep bowls. “So what kind of look was that?”

“The Don’t ruin this for me look. The Remember all the times I’ve helped you out look. That look.”

“Yeah, well, it wasn’t hard to get the point. He’s always working and doesn’t get to go out and meet women. He likes your friend, and she seems to like him for whatever reason”—he shrugged and grabbed a bell pepper from the stack of vegetables—“so I’m hanging out with my ex-wife’s lawyer and taking one for the team.”

She wrinkled her nose.

“Nothing. I’m just having a high school flashback.” Thankfully not the kind she’d had Friday night, but one that was unpleasant enough in its own right.

She concentrated on cutting the stem off a strawberry. “I had a friend whose parents would only let her go on group dates. So I always got dragged out with her and had to be the date of her boyfriend’s best friend, who pretty much reminded me every ten minutes that he was there as a favor and was taking one for the team by hanging out with me. It was super awesome for my fifteen-year-old ego.”

“Yeah, I should’ve just told her to leave me out of it and sneak out like everyone else.”

“Oh. Yeah. He was.” But even as she said it, she felt a pang of guilt in her gut. Craig hadn’t made it through prom night. So douche or not, she felt guilty talking bad about the dead. “We were just in a doomed-to-fail setup. Popular jock and high-strung goody-goody were not a wise combination. Two different planets and all that. He probably thought I was an insufferable Miss Priss.”

His lip curled. “Were you?”

She lifted her hand and held her index finger and thumb an inch apart. “Maybe a little. I wasn’t…not. When they brought weed to date night, I couldn’t just say no and let them do their thing. I gave everyone a lecture about how long it stays in your system and how having something on your record could ruin your college chances.”

He cringed. “Ahh, you were that girl. We had one of those at my school, too.”

He nodded. “Laney Becker. And she thought I was a douche.”

He lifted his fingers, repeating her motion back to her but widening the gap further.

“I probably would’ve done better if I’d been friends with someone like her. I could’ve used a girl telling me not to blow off class and get high. Or doing a lot of other things I shouldn’t have been doing back then.” He tossed more chopped veggies into a bowl. “And I’m sorry about the ‘taking one for the team’ comment. I didn’t mean it that way. This is just…a screwed-up situation. I’m willing to call a temporary let’s-forget-we-have-history truce for today.”

“Good.” He frowned down at her chopped berries. “Hold up. That’s not how to hull.”

She looked down at the berry in her hand. She’d cut off the top. The stem was gone. She didn’t see any problem. “What’s wrong?”

He set down his knife and stepped around the island. “You’re wasting a big part of the berry that way. Here.” He held out his hand for the paring knife, and she handed it over. He shifted until he was right next to her and held the fruit in front of her. “The woody part is just under the leaves. That’s what you’re after.”

He poked the tip of the knife right beneath the leaves and then made a circle around the stem. He popped out the stem and only a little piece of the berry, leaving much more of the fruit intact.

“See.” He held the strawberry in his palm, the sweet scent of the ripe fruit wafting up to her. “Lots more berry, and you also don’t lose the shape of the fruit that way.”

“Oh.” She tried to focus on what he was showing her and not on the fact that he was so close and she could feel his body heat against her arm. Her hormones apparently had no qualms about this man. They remembered what his lips tasted like and were ready to ignore everything she knew about him. Stupid, misguided hormones.

Roni wrote her first romance novel at age fifteen when she discovered writing about boys was way easier than actually talking to them. Since then, her flirting skills haven’t improved, but she likes to think her storytelling ability has. She holds a master’s degree in social work and spent years as a mental health counselor, but now she writes full time from her cozy office in Dallas, Texas where she puts her characters on the therapy couch instead. She is a two-time RITA Award winner and a New York Times and USA Today bestselling author. 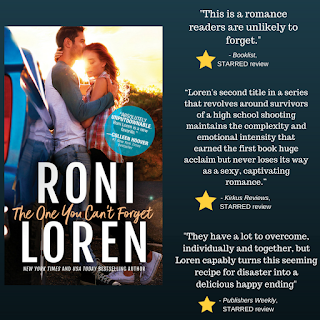