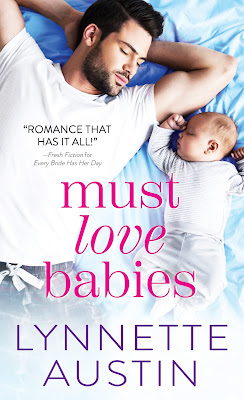 This baby's not the only one in need of a cuddle…

Brant Wylder is a bachelor and loving it! He's in Misty Bottoms, Georgia, property-hunting for his vintage car repair shop when he gets the call. His sister's been in an accident, and Brant has to drop everything and take care of his five-month-old nephew. That's the end of the bachelor lifestyle.

Bridal boutique owner Molly Stiles is all business all the time, until she sees that Brant's in trouble. In this Southern town, nobody ever has to go it alone. And besides, how can she resist that beautiful baby in the arms of a beautiful man…?

If Molly Stiles had been a vintage car, Brant Wylder would have known exactly what to do with her. She wasn’t, and he didn’t.

But a man could look.

“Hey, you still with us?” his elder brother, Tucker, asked.

“Good, because we have a job to do, and so do you,” Tucker said.

“Understood.” Brant met his brother’s gaze. “Chill. This isn’t one of your Marine reconnaissance missions.”

“No, it’s not. Which means no sniper’s waiting to take a potshot at you, so stop whining.”

“I’m not whining,” he groused. “This wedding’s a waste of time. I’d rather go with you to pick up that car.”

“We’ve got it covered.” His younger brother, Gaven, slipped into the rental car. “You’ll check out those places we spotted yesterday, right? See if one of them will work for us?”

“Absolutely.” His answer was automatic, his attention on the petite bridesmaid he’d escorted down the aisle. The woman was so drop-dead gorgeous, she made his palms sweat.

“Yep.” Brant eyed his watch. “That plane’s gonna leave with or without you two.”

Riding shotgun, Tucker rested a tattooed arm on his open window. “Sure glad it’s dark. Anybody sees us in this four-door, plain-vanilla, sorry excuse for a car, our reputation’s shot.”

Brant laughed. “Drive safe.” He tapped the car’s roof, then took several steps back as it headed down the winding, oak-lined drive.

The taillights disappeared, and he was alone.

Well, as alone as he could be with a hundred and some other people.

Resigned, Brant turned back to the wedding reception. Because the temperature was in the balmy midsixties, unusual for January even here in Georgia’s Low Country, Magnolia House’s massive front door stood open. Light, conversation, and laughter spilled onto the restored antebellum home’s front porch.

At the bar, he ordered a club soda with a twist of lime and, popping cashews, chatted with a friend of the groom’s. All the while, he kept the brunette front and center on his radar.

She threaded her way through the small clusters of guests, paused to speak to several, then plucked a grilled shrimp kebab and a napkin from a passing waiter’s tray. Raising the appetizer to her Kewpie-doll lips, she headed outside. Alone.

Brant set his nearly untouched drink on the bar and nodded to his new pal. “You decide you want us to do something with that ’72 Chevy Chevelle, give me a call.”

Casually, he crossed the room and stepped into the night. Molly had wandered to the edge of the large front yard and stood in a pool of moonlight. The two of them had bumped into each other twice now, and she stirred up feelings in him—feelings he had no time for, yet itched to explore.

For such a petite thing, the lady had curves. Shiny, coffee-colored hair curled halfway down her back, and his fingers practically begged to mess it up. She smelled sexy as sin on a dark night and all but made a guy drool. Her pale pink, bee-stung lips cried out to be kissed…but instinct warned him Molly could be dangerous. Very dangerous.

Brant ran a finger under his bow tie again and swore beneath his breath.

He felt restless. Last night, he’d driven through town a little after eight. It had been quiet, buttoned-down, and locked up tight. The carpet rolled up early in Misty Bottoms, Georgia. He could live with that.

Good thing, because if things worked out right, he’d be spending a lot more time here. But right now? Instead of hanging around Magnolia House in this monkey suit, he could be flying off to Texas with his brothers or at their garage in Tennessee in his old jeans, replacing a clutch in the ’48 Chevy they were restoring. Heck, for what the daddy of today’s bride had shelled out, Brant figured he could rescue a whole fleet of cars.

Music drifted on the soft night air and entwined with the scent of roses and jasmine. Muted voices rose and fell. He slipped a hand into the pocket of his tux pants and, feet crossed, leaned against one of the massive columns. Life had been bumpy lately, but at this moment, it was pretty darn good.

A full moon added its magic to the star-filled Southern sky. As he picked out several constellations, he imagined even the seated queen, Cassiopeia, danced tonight with Orion, the hunter. No doubt every single woman here had hearts, flowers, and wedding rings on the brain. It

Even so, he’d see if he could sweet-talk himself into a dance or two with sexy-as-all-get-out Molly.

At his previous wedding here, she’d tried her darnedest to escape the rush of single women desperate to nab the bridal bouquet. Now, she stood beneath a magnolia tree, her face tipped to catch the moonlight. The breath caught in his throat, and for one fanciful second, Brant imagined a mythical princess or fairy.

He shook his head. The woman was real, and he wanted a dance, wanted to hold her in his arms. A little flirting? Harmless.

Stepping out of the shadows, he made his way to her. “How about a dance?” Holding out a hand, he tipped his head toward the temporary dance floor in the backyard.

“I’m not asking for a lifelong commitment, sugar. Just a single dance under the stars.”

The luxury of staying home when the weather turns nasty, of working in PJs and bare feet, and the fact that daydreaming is not only permissible but encouraged, are a few of the reasons middle school teacher Lynnette Austin gave up the classroom to write full-time. Lynnette grew up in Pennsylvania’s Alleghany Mountains, moved to Upstate New York, then to the Rockies in Wyoming. Presently she and her husband divide their time between Southwest Florida’s beaches and Georgia’s Blue Ridge Mountains. A finalist in RWA’s Golden Heart Contest, PASIC’s Book of Your Heart Contest, and Georgia Romance Writers’ Maggie Contest, she’s published five books as Lynnette Hallberg. She’s currently writing as Lynnette Austin. Having grown up in a small town, that’s where her heart takes her—to those quirky small towns where everybody knows everybody...and all their business, for better or worse. 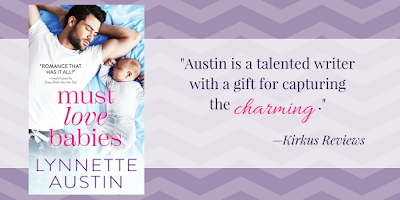