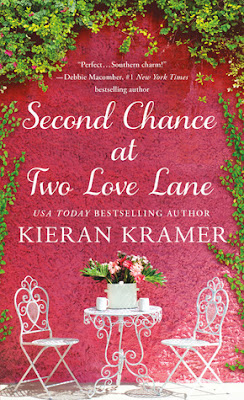 "I'm still your biggest fan, no matter what happened between us. I want you to be happy. And successful." - Ella Mancini

The third book in a sweet and southern romance series featuring three best friends who own a matchmaking agency.

In her professional career, Ella Mancini plays matchmaker at Two Love Lane but, in her personal life, she takes the stage at the Dock Street Theatre. Now she has a chance at a new role in a Hollywood movie that happens to be filming in Charleston—one that features a big-name actress, Samantha Drake. Long ago, Ella passed up a major audition while awaiting a marriage proposal. Not only didn’t she get the role; she never got the ring, either. Instead, her boyfriend Hank went on to become a huge film star…leaving her, and all her dreams, behind.

But now Hank’s back in Charleston, cast as the male lead in the same movie Ella’s in. In spite of the dramatic tension off-screen, he and Ella try to stay cool onset. But when their old feelings start to heat up—at the same time leading-lady Samantha tries to play cupid—all bets are off. How can Hank convince Ella, after all this time, that she’s the one he really wants to be with in real life—and that some happy, rom-com endings really can come true?

A little bit of backstory... I've wanted to try one of Kieran Kramer's books for some time. I had heard good things about a couple of her older books and my interest was piqued. When Second Chance at Two Love Lane came on my radar, I crossed my fingers (because it is the 3rd book in her Two Love Lane series) and dove in. Sadly, I didn't love it as much as I had hoped.

Second Chance at Two Love Lane focuses on the romance between Ella and Hank, who were once childhood sweethearts. During a pivotal time in their young relationship, the chance of a lifetime came between them. Hank chased stardom while Ella was left behind with a broken heart. Years later, Hank is given the opportunity to do a movie in his hometown and he see's this as the perfect chance to win Ella back. And he'll do anything to prove that he never stopped loving her.

To be honest, I had a lot of mixed feelings with this book. One one hand, I adored Ella and Hank. I enjoyed their romance throughout the book. I also enjoyed the Hollywood element, especially Samantha. I'd love to see her again in a future book. And I thought the story-line with Roberta was adorable. With that said, there were two elements in the book that I gave me a little pause. First, it felt like there was a little too much going on. I'm not sure if it was too much inner dialog or some of the side plots that took away from the romance, but somewhere in there was a disconnect and I ended up speed-reading through portions of the book. That sort of leads into the second factor. I didn't feel a connection with some of the background characters, which I wonder if it is because I started the series with the 3rd book. Between the two, there were times when I felt lost.

Overall, there were parts that I enjoyed and some that I didn't. I did enjoy Kieran's writing style. I adored the romance between Ella and Hank. And I found some of the background characters charming. I also loved the Hollywood and matchmaking elements. Thinking back, it probably wasn't the best book to start with. I should have picked up the series from the beginning and worked my way through. Since I have the second book on my shelf, I'm tempted to pick up the first book and give it a whirl. I'm curious if I'd enjoy the series more by starting from the start.

If you're curious, I'm giving Second Chance at Two Love Lane 3 stars on Goodreads. I enjoyed it, but didn't love it.

USA Today bestselling author Kieran Kramer is a former CIA employee, journalist, and English teacher who lives in the Lowcountry of South Carolina with her family. Game show veteran, karaoke enthusiast, and general adventurer, her motto is, “Life rewards action.”Kieran is the author of the House of Brady novels, including Say Yes to the Duke and The Earl is Mine.