Review: Wild on my Mind (Where the Wild Hearts Are #1) by Laurel Kerr 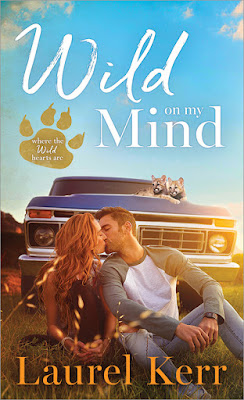 "I care about your daughter, Bowie. You know that. I don't want Sawyer ever making another little girl feel...well, like she made me feel." - Katie Underwood

Love runs wild at the Sagebrush Flats Zoo,
where a motley crew of big-hearted animals
helps the most unlikely couples find love.

When Katie Underwood discovers a litter of newborn cougar cubs, the last person she expects to come to the rescue is her former crush—and high school nemesis—Bowie Wilson. The worst part? He doesn’t seem to remember the trouble he caused her.

As a single father and owner of a cash-strapped zoo, Bowie struggles to balance budgets while raising his preteen daughter and a host of rascally animals. He considers himself lucky when Katie agrees to lend her talents to a publicity campaign in support of the zoo’s animal rescue programs—until he learns just what she’s planning…

This time, Katie is determined to resist Bowie’s charm. But a lovelorn camel, a matchmaking honey badger, and a nursemaid capybara have different plans. Can they and the rest of the zoo’s menagerie help Bowie break through the barriers surrounding Katie’s heart?

When I first came across Wild on my Mind, I thought it was going to be a fun and carefree romance with adorable baby animals. Boy, I was not prepared for the emotional roller-coaster this book took me on. Hang on, it's going to be one heck of a journey.

Growing up in the foster system, Bowie has never felt like he belonged. When the popular girl starts paying attention to him, he does anything to stay in her good graces. Sadly, that includes tormenting Katie. Of course fate would bring her back into Bowie's life when his young daughter is being bullied. Katie sweeps in to lend her publicist expertise to help support the zoo and to give both Bowie and his daughter a shoulder to lean on. Neither Bowie or Katie expected to find forgiveness and love, but they can't deny the attraction that is growing between them.

Holy Emotions, Batman! Wild on my Mind threw me for a loop and I loved every moment of it. Honestly, I had no clue that bullying was going to play a role in the story and of course it makes the story more emotional. I loved getting to know the fabulous characters Laurel created, both human and animal. That honey badger, though! Definitely stole the show. Kudos to the author on an extraordinary debut book. Keep 'em coming because I have a feeling you'll be on my favorite author list in no time.

“What are you working on?”

Katie tilted the screen in Abby’s direction. “A new website. Do you want to see what I’ve done so far?”

“That looks so awesome!” she said.

A smile spread across Katie’s face. Sharing her work with a tween was completely different from showing her old, grouchy boss. Abby squealed constantly and even clapped her hands twice. She pointed at the screen, excitedly giving suggestions. Some, especially her personal stories about the animals, were great. Katie’s fingers flew across the keyboard as she felt a rekindling of her old excitement for web design. In fact, she and Abby were so engrossed in the website that they didn’t even notice when Bowie woke up.

“How long was I out?” he asked. Katie turned to see him sitting upright on the air mattress, rubbing the back of his head. The gesture caused his already disheveled shirt to hike up, revealing several inches of nicely toned abs. It also had the side effect of flexing his right bicep—his very nice, very muscular bicep.

Even a model would have trouble pulling off sexy dishabille so effortlessly. Sleep had cured Bowie’s drawn features and dark circles. The fact that he wasn’t fully awake only added an element of intimacy, despite Abby’s presence. His black hair stood up in uneven spikes, making Katie want to smooth it down…and not just because it looked messy.

Katie didn’t want to feel that slow, pleasurable tug again. It had muddled her mind in the past, and she didn’t want to start gazing at him with puppylike adoration, especially now. She was having enough trouble trying to figure out her career path without adding distraction into the mix—especially distraction of the male variety.

She was an adult. She understood the pull of sexual attraction and knew how to prevent it from turning into infatuation. She certainly knew not to mistake it for love.

“It’s six thirty,” Abby chirped happily, bouncing up from the floor. “I gave your breakfast to Katie. I’ll go grab another bagel.”

She bounded from the room with the energy only someone under the age of thirteen could possess. Bowie yawned and stretched, showing even more of his stomach muscles. Halfway through, he must have realized that his shirt had slid up, because he stopped and yanked it down.

Pity. Although, really, wasn’t that what Katie wanted?

“You should have woken me,” he told her, standing up.

She shrugged. “You looked like you needed the rest, and I was on a roll with the website.”

Bowie shifted uncomfortably and said gruffly, “Thanks, but you didn’t need to do that. I’ve run on little sleep before.”

“No biggie. So have I. And I had plenty of fuel.” Katie gestured to the two empty cans of Red Bull beside her.

“Did the cubs wake up for a feeding?”

“So what were you and Abby looking at when I woke up?”

Katie got up and handed him the laptop. “She was helping me put together information about the animals for the website. What do you think so far? I’ve kept it professional and user-friendly. We can add some flashier features, but I think the portal should be streamlined.”

“This looks great,” Bowie said, the enthusiasm in his voice sounding legitimate. “You accomplished all this last night?”

A part of her thrilled at his words. Even long after Katie should have known better, she’d yearned for his and Sawyer’s respect. Suddenly, her dad’s words from yesterday popped into her mind. Was a part of her still trying to prove herself? Is that why she wanted a flashy job so badly? To have something to brag about? To automatically impress people?

Before Katie could reply, the door opened, and Lou entered. He walked a little stiffly but was still steady on his feet. She wouldn’t call him frail, but he didn’t quite fit the category of robust either. Lou glanced back and forth between her and Bowie, and Katie didn’t like his speculative look. Both the elderly zookeeper and her mother were a little too eager for them to work together. Thankfully, Lou didn’t make any comment. Instead, he just greeted them cheerfully.

“So how are my charges this morning?” he asked.

Lou turned toward her. “So, you stayed the whole night. Couldn’t tear yourself away from the little critters, could you?”

“Nope, especially when they were curled up in little balls next to Sylvia. Plus, Bowie looked like he was on his last legs, so I thought I’d give him a few extra hours of sleep.”

Lou’s eyes gleamed at her last comment, and Katie nearly winced at her blunder. She did not want to encourage the elderly vet’s matchmaking.

“Would you like to help me weigh the cubs and check them over?” he asked.

“I’ll be out feeding the animals,” Bowie said. “Let me know if you’re too tired to drive home, Katie. Lou can watch the cubs, and I’ll give you a lift.”

“I’ll be fine,” she told him, surprised by his offer.

He gave her a close look. “Are you sure? It’s not easy staying awake after an all-nighter.”

Bowie nodded and was starting to leave when Katie thought of something. “This is most likely nothing, but I thought I heard an animal last night. It was probably just my imagination.”

He immediately turned around, his voice resigned. “What did you hear?”

“A chittering sound,” Katie said, and then, as best as she could, she mimicked it.

Bowie exchanged a look with Lou. Then both men said simultaneously in the same exasperated tone: “Fluffy!”

“The zoo’s honey badger, but he isn’t a true badger. He’s more closely related to a weasel or a marten,” Bowie answered.

Katie had never heard of the creature, which surprised her. “What part of the world are honey badgers from?”

“Africa,” Lou answered before he turned to Bowie. “You better get Abby before she leaves for school.”

Bowie nodded at Lou before turning to her. “Abby is the only person who can catch Fluffy.”

“Honey badgers are ornery critters,” Lou said, “but Fluffy has a real soft spot for our girl.”

Bowie scowled. “It’s those honey-covered larvae that she sneaks him.”

Laurel Kerr is a full-time romance writer and mom, who occasionally still dabbles in the practice of law. Her debut novel, Wild on My Mind, reached the Golden Heart® finals under the title of Volunteering Her Heart in 2016. Laurel Kerr was also a 2017 Golden Heart® Finalist for a historical manuscript. She lives in Pennsylvania with her daughter, husband, and loyal Cavalier King Charles Spaniel. 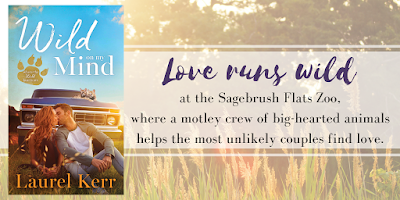