Review: Big Bad Cowboy (Once Upon a Time in Texas #1) by Carly Bloom 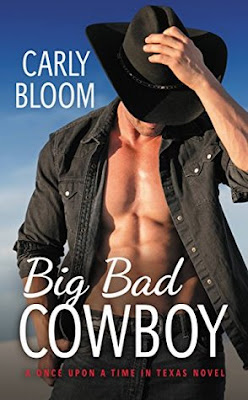 "Travis, you're prettier than me. There is no way I'm taking my clothes off now." - Maggie Mackey

After one too many heartbreaks, Travis Blake hung up his cowboy hat and put Big Verde, Texas, behind him. But when he gets the call that his young nephew needs him, he knows he has to return home. His plan is to sell the family ranch and hightail it back to Austin, but there’s a small problem: the one person who stands in his way is the one person he can’t resist.

Maggie is pretty sure she hates Travis Blake. He’s irritating, he’s destroying her business, and . . . and he’s just so frickin’ attractive. But when they’re forced to work together, Maggie discovers that the Most Annoying Man in the World is more than he seems. He’s sweet with his nephew, he helps out in the community, and he makes her heart flutter. Maggie doesn’t want to risk everything on a man who wants to leave, but what if she can convince this wayward cowboy to stay?

Something you might not know about me is that one of my all-time favorite romance movie is You've Got Mail with Tom Hanks and Meg Ryan. It doesn't matter how many times I've seen it, if I catch it on television, I will watch it. This is most likely the reason why I've already read 2 books with a You've Got Mail vibe. The first was Dear Santa by Nancy Naigle (I will talk about it later in November), which is a clean romance. The second was Big Bad Cowboy, which obviously is more of a sexier version.

I flipping loved Big Bad Cowboy so much I'm pretty sure I now have a big bad wolf fetish. I joke that it's probably a good thing I don't read shifter romance because I would totally be a goner. The chemistry and sexual tension pulses throughout the entire book. One of the best elements of this book is the characters. Maggie is always the friend, which was fine growing up, but now she's tired of being one of the guys. So when the sexy stranger in a wolf mask sparks up a conversation, Maggie throws caution to the wind and follows him into the woods. Travis used to be the shy kid in high school. The son of a drunk, nobody thought much of him. Now that he's back in town to sell his dad's ranch and care of his nephew, people start talking. He's immediately drawn to the sexy Little Red Riding Hood and when he learns that it was Maggie, he wants a chance for more than their sexy encounter in the shed.

I loved Maggie from the beginning. She's an amazing friend. She'll call you out on your shit, so never cross her. As for Travis, there were moments when I wasn't his biggest fan. I often had to remind myself that he's in a tough position having to take care of his young nephew while dealing with his deadbeat brother. He's in way over his head with the ranch and so everything piles on top of him. Once he starts getting the hang of things and finally understands why Henry is acting out, Travis's true nature starts coming out and that's the part of him that I loved. Together, Maggie and Travis set the book on fire. They sure do bring out the kinkier side in each other.

I friggin' enjoyed the hell out of Big Bad Cowboy. I loved the funny moments just as much as the sexier ones. The scene where Maggie and Travis read a bit of a pretty naughty book was by far my favorite in the book. I had a big 'ol smile on my face while I was reading that one. Characters that have fun and can laugh during sex are my absolute favorite. I cannot wait to see how the author continues with this series. I'm hoping it stays with the group of friends and follows Claire next. Either way, I know I'll be counting down until it's release.

Carly Bloom began her writing career as a family humor columnist and blogger, a pursuit she abandoned when her children grew old enough to literally die from embarrassment. To save their delicate lives, Carly turned to penning steamy, contemporary romance. The kind with bare chests on the covers.

Carly and her husband raise their mortified brood of offspring on a cattle ranch in South Texas. Also? Carly is vegan. The cows love her.