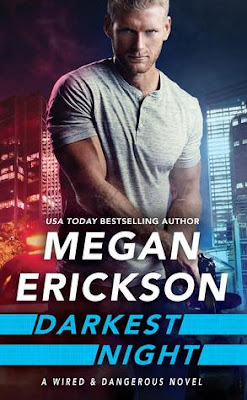 "I'm no diamond. You can dig and dig to the brink of exhaustion, nearly killing yourself, and there'll still be more fucking dirt. Do you understand what I'm saying to you?" - Jock Bosh

Bodyguard Jock Bosh has one job: keep Fiona Madden safe. Safe from the men who’ve been hunting her. Safe from the bastard responsible for ruining her life. And with the attraction sizzling white-hot between them, that means keeping Fiona safe from him too.

Fiona has spent the last decade on the run. Her survival is the single greatest weapon she’s had against the men out to destroy her. Until Jock. Now, with him by her side, she finally has a chance to bring them down. But when her enemies make their next move and Jock puts himself in the line of fire, Fiona realizes there’s more at stake than just her life—she’s also risking her heart.

Darkest Night, the second book in Megan Erickson's Wired & Dangerous series, follows Jock and Fiona, two characters whose pasts left them deeply wounded. Fiona is a survivor of a sex trafficking ring. Now on the run from someone who has been sending her graphic pictures of the torture she was put through, Fiona knows that she can't let her guard down if she wants to survive. When Jock comes in claiming to know her college best friend, she's understandably shocked. As for Jock, well, he has his own dark past. After the death of his brother, Jock went into a fury that few can survive. Now he's helping Fiona to repay a debt and because he knows what it is like to fight your demons. After an attack forces them to flee, they have to depend on each other make it out of this alive.

I was super excited going into Darkest Night. I heard so many great things about the previous book and about Megan's writing style in general so when I was in a romantic suspense mood, this was one of the books I immediately reached for. Sadly, for the first couple chapters of the book I hit a solid brick wall. And we're not talking about the sexy solid brick wall of a hero's chest... I had a bit of a difficult time connecting with this book mainly because I had not read Zero Hour. Of course it's not necessary to read them in order, but I think it would have helped me get into the book faster. Once I had gotten past what was stopping me, it was full steam ahead and I ended up loving Darkest Night. It was a fantastic mix of truly jarring suspense and sexy romance between the lead characters. I loved how incredibly strong they both were, especially Fiona. That woman is fucking bad-ass.

Overall, Darkest Night was a fabulous romantic suspense book. Once I got past the roadblock, I couldn't put it down. Up next is a M/M novella. I'm still new to M/M romances and I haven't quite decided if I want to give it a go. I'm leaning towards yes. So we'll see... If not, I definitely want to pick up Zero Hour soon.

Megan Erickson is a USA Today bestseller and former journalist who switched to fiction when she decided she liked writing her own endings better.

She lives in Pennsylvania with her very own romance hero and two kids. Although rather fun-sized, she’s been told she has a full-sized personality. When Megan isn’t writing, she’s either lounging with her two cats named after John Hughes characters or… thinking about writing.