Review: If the Shoe Fits (Almost Royal #1) by Rachel Lacey 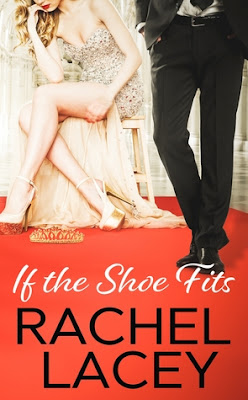 "I want you so badly I can't think about anything -- or anyone -- but you. I want to kiss you again, Elle. I want to do a hell of a lot more than kiss you. I won't, not today anyway, but we will definitely revisit this topic again soon." - Theo Langdon, Earl of Highcastle

NOT ALL FAIRYTALES END AT MIDNIGHT

Elle Davenport is no princess—she just dresses up as one for her job at a local theme park. But when she gets the call that she’s won a contest to live and work at a real-life castle in Virginia, she finally feels like she’s found her calling. If she’s successful, her venture could become permanent, and that sounds like Elle’s idea of the perfect modern-day fairytale. There’s only one problem: the castle’s grumpy—and sexy—new owner wants her gone as soon as possible.

Theo Langdon never imagined he’d inherit the title of Earl of Highcastle so young. With his grandfather’s recent death, he needs to sell Rosemont Castle so he can return to London. If only he wasn’t butting heads with the vivacious new property manager at every corner. Although he’s got a life waiting for him in London, Rosemont Castle suddenly feels a lot like home, thanks to Elle. As the clock winds down on her time at the castle, he’ll have to reconcile his obligations in London with the American woman who’s stolen his heart.

Who doesn't love a fairy tale romance? I can't get enough of them. Whether it's in a book, Hallmark movie, or in real life, they always make me swoon. Rachel Lacey's If the Shoe Fits was no different. From the cute meet to their happily ever after, I had a big smile on my face.

Right off the bat, If the Shoe Fits takes a page from Cinderella with Elle losing a footwear on the steps of the Rosemont Castle. In a classic Prince Charming move, Theo swoops in and, well, you know how that goes. Things aren't all fairy tails and rosebuds between these two, though. Elle and her two friends, Megan and Ruby, want their new venture to succeed. This is a once in a lifetime opportunity to not only to run their own inn at the castle, but also to help shelter pets get adopted. Theo is being pressured by his UK relatives to sell his grandfather's castle and return home. As he grows closer to Elle the decision becomes more difficult. Does he make his family happy at the risk of losing Elle?

I had a ball reading If the Shoe Fits. Sorry, I couldn't resist.

If the Shoe Fits had the Rachel Lacey charm that I love. The characters were lovable. The chemistry between Theo and Elle was adorably hot. Odd combination, I know, but it's the only way I can describe the chemistry between them. It was sweet at times and sizzling at others. There's a lot that happens in this book and it can get a bit overwhelming at times, but the flow and pace kept me in the story. The pace was fast enough that the story didn't lag or get boring. Hopefully that makes sense. I'm not quite sure where this series is going to go next. I have a feeling that Ruby and Megan will be the heroines, but I haven't a clue who their heroes are going to be. I do know one thing, though. It's going to be a fun series filled with charm, sexual tension, and a lot of happily ever afters.