Spotlight: A Billionaire Wolf for Christmas (Heart of the Wolf #26) by Terry Spear 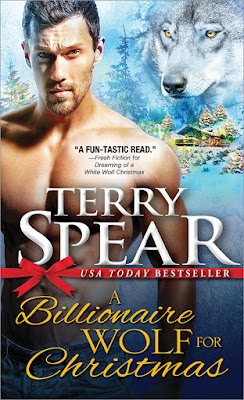 When the wolves’ own blood betrays them, they risk their lives to find a miracle.

Wolf shifter Dr. Aidan Denali has been working day and night to find a cure for werewolves’ alarmingly sudden decline in lifespan. The key to the problem eludes him. But when Aidan grudgingly leaves his work to do some holiday shopping, he meets a remarkable she-wolf whose mysterious pack could bring him one step closer to the answer.

Dr. Holly Gray is thrilled to meet the wolf who’s been working so hard to help others. Now, it’s her turn to help him. But while their attraction is sizzling, the packs are at odds, and the danger is increasing. It’s going to take a holiday miracle for Holly and Aidan to get themselves—and their loved ones—out of this alive…

Holly was so thrilled to see Nick, that he was all bundled up and now standing next to his fire, and glad to see them, she ran to him and jumped at him like an unruly pup. She woofed in greeting. He ran his hand over her head in a heartfelt caress, his eyes tearing up. God, she knew he’d missed the pack and felt bad to be out here. He couldn’t have been satisfied with living like this.

She was glad that he was happy to see them and that he hadn’t run off, angry with her for being part of the pack that had banished him.

His response was a small smile, and she swore he looked just like Santa Claus with his white beard and hair, his whiskers partly frozen. “Welcome to my camp. Is he your mate?” He glanced in Aidan’s direction, as the wolf moved in beside her.

“I’m glad to see you too, Greg.” Nick motioned to the tent. “Change of clothes inside if you want to converse with me human-style,” Nick told Aidan.

Holly would let Aidan do all the talking. In the meantime, her brother sat by the fire, eyeing the fish in the frying pan, looking ready to forget his manners and be a wolf and eat it. Ted and Mike joined him by the fire, appearing as though they were going to stop him if he even thought of eating Nick’s lunch. She was glad to see Nick appearing so well, and by the look of it, he was eating plenty and perfectly healthy.

Aidan went inside the tent and within a few minutes, he had shifted, thrown on some warm-weather clothes, and joined them by the campfire. He sat on a log that would probably be used for the fire later, unless they could convince him to go with them. Holly settled down next to Aidan, her body resting against his leg, and he reached down and ran his hand over her head.

Nick took a seat on a camp chair. “The one who was looking to take blood from all the wolves everywhere and figure out what’s wrong with us—or I should say with others of our kind who aren’t in the pack. I know. Everett Johnston called me a while back and told me, concerned I might be like everyone else and need to have my blood checked. What difference does it really make for an old wolf like me?” He raised a white brow. “You came all the way out here to track me down to take my blood? It’s half frozen.” He motioned to Holly. “At least she was worried about my health, I ‘spect. I know you tried calling me too, but I wasn’t in the mood to talk to anyone in the pack.”

“That’s not the only reason we were trying to track you down,” Aidan said. “If you’d allow me too, I’ll help you find a pack you would like to join. If you’re interested.”

Nick’s gray eyes widened a bit, looking surprised at that bit of news. “You’re with a pack?”

“We don’t really have an official pack, but hell, yeah, if you’d like to join us, we’d be glad to offer you a home. I’ve been testing wolves’ blood wherever I can find a pack. I’ve gotten to know several and keep in touch with all of them. That means a lot of packs you could check out, and I’m sure you’ll find one that will suit you. Everett Johnston called me.”

“He was banished like me. Did you know that? He was the accused bank robber.”

“Wrongly accused and that was all cleared up, but he had no intention of returning to the Seattle pack. He, his mother, and his sister, are now with a pack in Montana, but I guess you know that. He’s the one who told us about you, or we wouldn’t have known you were out here. Then I spoke with Holly, and she confirmed that you were living in the area, and she was trying to check on your well-being, but she hadn’t been successful.”

“What does Ronald say about it? I imagine he wouldn’t like that Holly and Greg are out here with you and…your friends?”

“My bodyguards, Ted Gallagher and Mike Stallings. And I’m sure you’re right about Ronald, but he has no say in where you go from here on out after banishing you, and Holly and Greg felt compelled to find you. Running around here by themselves was too dangerous up in this area,” Aidan said. Holly licked Aidan’s cheek. He smiled at her and wrapped his arm around her to give her a hug.

“What if I visit another pack and don’t like the people, or their politics? Or they don’t like me?” Nick asked. “I could be trading one bad pack leadership for another.”

USA Today Bestseller, Terry Spear writes urban fantasy and Highland medieval romance: hot wolves, jaguar shifters, medieval Highlanders and lots more. She also pens young adult paranormal romance. She has over sixty paranormal and other books to her name, earned Publisher’s Weekly Best Books of the Year, and has been featured in The International Wolf Magazine, Woman’s World and BGS Book Review Magazine. She creates award-winning teddy bears in the heart of Texas and gardens. She retired from USAR after rappelling, mountain climbing, learning water survival, qualifying with a number of firearms, survived the obstacle courses, leadership reaction courses and confidences courses – and knows if she can do it, her characters can overcome any obstacle she puts in their path. 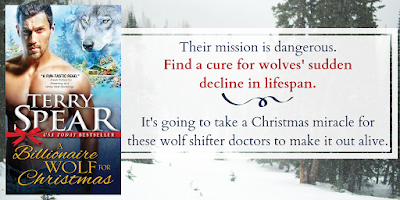