Review: Up In Flames (Flirting with Fire #2) by Jennifer Blackwood 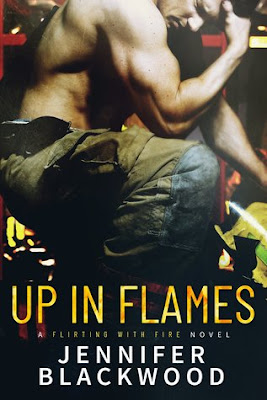 It takes one little spark for enemies to ignite into lovers in a searing-hot novel by USA Today bestselling author Jennifer Blackwood.

Sloane Garcia has butted heads with Reece Jenkins ever since he was a colossal jerk of epic proportions on a night she’d rather forget. So what if he’s overconfident, ultramasculine, and hard muscled? When she finds out he’s on the auction block at the annual firefighter’s charity event, she decides to give this cocky firefighter a dose of his own medicine. Now that she’s won the hunk, he’s on call—to do whatever Sloane wants.

Sure, Reece and Sloane had a rocky start, but he had his reasons. None of that matters now that he’s the bachelor at her beck and call, tasked with granting her four wishes in four weeks. He runs into burning buildings for a living, but nothing will be as tough as dousing the flames Sloane ignites in him. What started out as just a game might end up with Reece losing the one thing he swore he’d never give up: his heart.

Oh, my. I've said this before and I'll say it again... I love verbal foreplay! Banter between two characters that are so damn oblivious but you see the chemistry? Holy Hotness, Batman! I've discovered a handful of authors who are on a whole different level when it comes to verbal foreplay and Jennifer Blackwood is definitely one of my favorites. I loved it in Burning Up, the first book in the Flirting with Fire series, and I devoured it in Up in Flames.

Ask anyone if they would put Sloane Garcia and Reece Jenkins in the same room and the response would be a resounding NO! It didn't always be like this. As his little sister's best friend, Reece saw a lot of Sloane growing up. If he's being honest, there was also a time in high school where he harbored a crush on her. Those amicable years went out the window the night he royally fucked up. You see, Sloane also had a minor crush on Reece growing up and after a pretty painful break-up, she gathered the courage to make a move only to be brutally shot down. After that fateful night, these two can't stand each other. And when they are in the same room? Everyone but them can see the attraction under all of the death glares.

I am in love with this series. The first book was fantastic. Up in Flames was so freaking good. I hope that the last book is just as good and that it is a certain pair of best friends. Going back to the banter between Reece and Sloan. While I loved it as a whole, there were moments when I felt they took it too far. There's funny banter and there's hurtful banter. I do think some of it was unnecessarily mean. I did like how they grew as characters and realized how hurtful some of it was. That's why I loved it as a whole. I loved the funny and sexy banter, but I also loved the growth and journey the characters made through everything else. Overall, great book. I love this series and I'm hoping the last book is Madison and Hollywood. I've got my fingers crossed.

Jennifer Blackwood is a USA Today bestselling author of contemporary romance. She lives in Oregon with her husband, son, and poorly behaved black lab puppy. When not chasing after her toddler, you can find her binging on episodes of Gilmore Girls and Supernatural, and locking herself in her office to write.