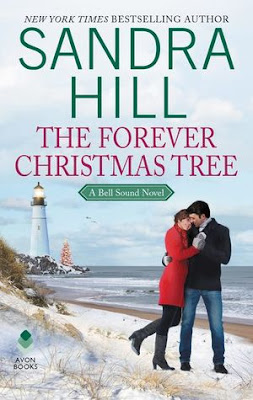 The Christmas bells are chiming across the Outer Banks town of Bell Cove, North Carolina, but there’s one local ‘grinch’ who’s not listening . . .

He’s got bad-boy looks and a Bah Humbug attitude, so when the local paper asks the villagers to vote on the “Biggest Local Grinch” as a fund-raising project, Ethan Rutledge isn’t surprised to hear he’s made the ballot. He might own the local Christmas Tree Farm, but the holiday hasn’t been welcome in his home since Wendy Patterson left him heart-broken twelve years ago.

But now Wendy’s back, fresh from a tour of duty as a female Navy SEAL. She’s bold, beautiful, and has five Navy buddies trailing after her—as if she needs a bodyguard! And what’s all this about them wanting to start a treasure hunting company right here in Bell Cove’s failing bell factory? Then Wendy learns about how Ethan’s been nurturing the one thing he has to remember her by: a gorgeous Norway Spruce tree.

Can the magic of Christmas and the spirit of the town help rekindle the romance between two people who thought they’d left love behind years ago?

As my first Sandra Hill book, I had some mixed emotions with The Forever Christmas Tree. I was super excited to read it because I had heard many good things about her writing. While I did enjoy the book, there were a couple hurdles that kept me from loving it.

I adored the setting. I love small town romances and they seem extra special during the holidays. So the whole idea of a "Biggest Local Grinch" contest had me rolling. That screams small town and friggin' loved it.

I also loved the idea of friends and family coming together during the holidays. I liked watching Wendy's friends make themselves at home in Bell Sound. They stuck out like sore thumbs and I hope that some of them will get their own books in the future so we can follow how they adjusted to live in the small town.

Wendy is friggin' bad-ass. Not just because she's a female Navy SEAL (because why not?), but also because she doesn't let people intimidate her. Wendy has learned to face her problems straight on.

I also really enjoyed Sandra's writing style. For some reason, I always thought she was just an historical writer. Not sure why since now I know she has several contemporary books. I may have had some issues with this book, but I will for sure pick up the next book in the series because I enjoyed her writing style so much.

I loved how Sandra integrated the character's inner thoughts throughout the book. It almost felt like they were putting their own two cents into the story. And I really enjoyed it. Definitely gave the book more dimension.

There were times in the book where Ethan pissed me off. I really wanted to yell at him in a couple spots in the book. Dude, the world doesn't revolve around you! He cheated on her, yet has the balls to be angry at HER for leaving?! Dude, you're lucky your balls are still attached because yeah... It took me a long time to really like him.

I wanted more of the Christmas tree. It played a big role in Ethan and Wendy's history, but we barely see it in the book. For it to have a big importance to their romance, I felt like it should have been featured more.

It also felt like the book had a bit of what I call "first book in a series" syndrome. Naturally, the first book in any series is going to have a lot going on. The author has to set the scene, introduce characters, visit the past if the couple has one, etc. Between meeting the citizens of Bell Sound and meeting Wendy's friends, there were times when it distracted me from the romance.

At the end of the day, I really did enjoy The Forever Christmas Tree. Yes, I had some issues but they didn't take much away from me wanting to finish reading it. And I still really want to continue on with the next book. That's a win in my eyes.

Sandra Hill is a graduate of Penn State and worked for more than ten years as a features writer and education editor for publications in New Jersey and Pennsylvania. Writing about serious issues taught her the merits of seeking the lighter side of even the darkest stories.

Posted by CrystalBee at 1:25 PM