Review: Crave the Heat (The Smokejumpers #2) by Marnee Blake 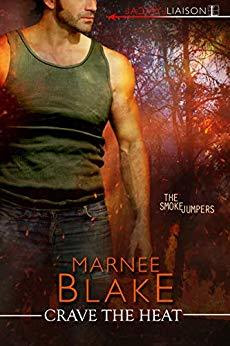 "Just coffee, not a marriage proposal. Not even a date." - Dak Parrish

Smokejumper Dak Parrish has come home to Oregon to fight fires—and to mend fences with his family. He left the Warm Springs Tribal Reservation after feuding with his father. Now, with tribal lands threatened by an arsonist, Dak gets a chance to make amends by acting as a liaison between the reservation and the forest service criminal investigator—a woman who sparks a surprising and hungry flame in him.

After a trauma on the east coast, Heidi Sinclair left DC to start fresh as a criminal investigator in Oregon. But her first serious investigation provides one stubborn obstacle after another—including an arrogant firefighter she suspects knows more than he's saying. Though she tries to battle her attraction to Dak, it’s too late. As they track down the arsonist, someone will do whatever it takes to keep old secrets buried, even if it turns everything Heidi and Dak have fought for to ashes . . .

If you go through my Kindle, TBR pile, and my read shelf on Goodreads, you'll notice that there is a serious shortage of firefighter romances. I'm not quite sure why, but it's something I hope to change in the future. Starting with Crave the Heat, the second book in Marnee Blake's The Smokejumpers series...

After more than a decade, Dak Parrish returns home to join an elite group of smokerjumpers and to mend ties with his family. The last person he expected to see at his station was his domineering father, yet there he was demanding Dak keep an eye on the new investigator that was sent to find out who is behind the recent fires. Things start to get murky when the fires get closer to home and threaten someone Dak has come to care for.

Needing a change of scenery, Heidi Sinclair left her previous life in DC in hopes of leaving traumatic events behind her. Now living in Oregon investigating recent fires when Dak is seemingly thrown at her. Working with him is one thing, but when their attraction starts to grow Heidi finds herself in a similar situation as the one she left. Soon the lines start blurring and she finds herself in danger.

I really enjoyed Crave the Heat. It was short and sexy with enough suspense to keep me guessing. The characters were lovable. The author's writing style was fantastic. I was originally drawn to the book from the cover and Crave the Heat totally delivered. I hope to pick up the 1st book before the next book comes out.

Award winning author and RITA® finalist Marnee Blake used to teach high school students but these days she only has to wrangle her own children. Originally from a small town in Western Pennsylvania, she now battles traffic in southern New Jersey where she lives with her hero husband and their happily ever after: two very energetic boys. When she isn't writing, she can be found refereeing disputes between her children, cooking up something sweet, or hiding from encroaching dust bunnies with a book.