Review: Going Down by Barbara Bell 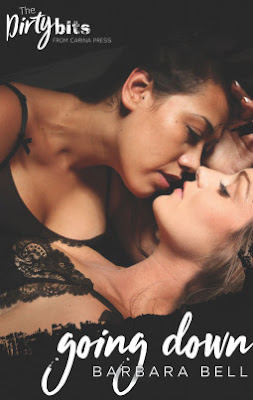 Trapped in an elevator with her boss…

Ellie has been trying to keep her distance from Casey, her supervisor, ever since last year’s Christmas party. A quickie in a bathroom stall left both women breathless…and more than a little embarrassed when they rejoined the party. Workplace snogging is highly inappropriate.

Body temperatures are already rising when Ellie and Casey find themselves alone in the elevator one Friday night at the office. When the lift comes to a grinding stop, awkward isn’t large enough a word.

Trapped in an elevator with her boss. Her tall, powerful, beautiful boss—the woman who monopolizes Ellie’s fantasies and sneaks into her dreams.

Whatever will they do to pass the time?

I am a firm believer that if you are going to try something new (author, genre, etc.) and you're not quite sure how you are going to feel about it, it's always best to start with something short and quick. If you're not a big fan of PNR and you want to try it, pick up a novella or two. For me, I have a book that I'll be starting soon that will be my first time reading a F/F romance. I've read M/M and various other multiple partner combinations before, but never F/F. When I came across Going Down by Barbara Bell, I thought this would be the perfect time to dip my toes instead of diving head first.

I have been loving the hell out of Carina's Dirty Bits line. The novellas are short and sexy AF. I loved the idea behind Going Down. It's sort of a forbidden office romance between a supervisor and her employee who are trapped in an elevator. Things are strained between them after a lust-filled encounter during a Christmas party, but it doesn't take long before the temperatures rise and they stop holding back. As a novella, I enjoyed it. The story kept my attention from start to finish. It was sexy and did a fantastic job introducing me to F/F romances. However, it wasn't my favorite. The attraction between Ellie and Casey was there, but it felt very one-sided, possibly because the novella is only in Ellie's perspective. I wanted more depth that really wasn't there. I don't know if it's because it was my first F/F romance, but I definitely wanted to explore their connection more instead of focusing on their sexual chemistry. Overall, Going Down was the short and sexy romance I love about Carina's Dirty Bits, but I wanted more from it.

Barbara Bell grew up on a sheep farm in rural Australia, moved to Brisbane when she was nineteen to study film, and now lives in Sydney with an ever changing cast of housemates and a colony of bees.

She is an avid traveller, a proud geek, and loves telling stories about human relationships and how strange and silly (but also beautiful) they can be. She began writing when she was eleven years old and believes it's probably too late to break the habit now.