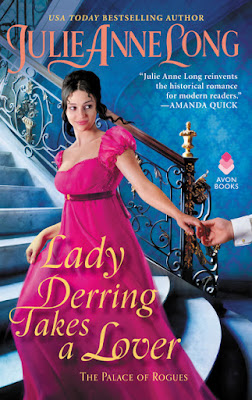 A mistress. A mountain of debt. A mysterious wreck of a building.

Delilah Swanpoole, Countess of Derring, learns the hard way that her husband, “Dear Dull Derring,” is a lot more interesting—and perfidious—dead than alive. It’s a devil of an inheritance, but in the grand ruins of the one building Derring left her, are the seeds of her liberation. And she vows never again to place herself at the mercy of a man.

But battle-hardened Captain Tristan Hardy is nothing if not merciless. When the charismatic naval hero tracks a notorious smuggler to a London boarding house known as the Rogue’s Palace, seducing the beautiful, blue-blooded proprietress to get his man seems like a small sacrifice.

They both believe love is a myth. But a desire beyond reason threatens to destroy the armor around their hearts. Now a shattering decision looms: Will Tristan betray his own code of honor…or choose a love that might be the truest thing he’s ever known?

She’d taken two steps when he said, his voice raised only a little, “Lady Derring . . . something

Took a shuddering breath for courage.

Turned back to him. From the relatively safe distance of three feet, she said, “Surely not. We’ve established you know everything.”

His smile was small and patient. “You seem to excel at so very much here at The Grand Palace on the Thames. Yet you can’t seem to disguise how much you want me.”

USA Today bestselling author Julie Anne Long originally set out to be a rock star when she grew up (and she has the guitars and fringed clothing stuffed in the back of her closet to prove it), but writing was always her first love. Since hanging up her guitar for the computer keyboard, her books frequently top reader and critic polls and have been nominated for numerous awards, including the Rita, Romantic Times Reviewer’s Choice, and The Quills, and reviewers have been known to use words like “dazzling,” “brilliant,” and “impossible to put down” when describing them. Julie lives in Northern California.