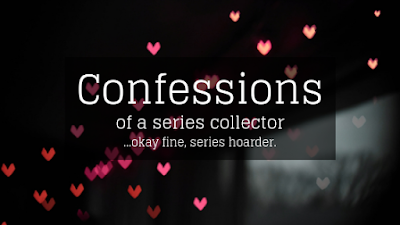 Hello, my name is Crystal and I'm a series collector. I feel like that's the nice way of saying I'm a series hoarder. Let's sugar coat it. A week or so ago I came across a blog post called Hoarding Series I haven’t Read – What in the World?? from Chelle's Book Ramblings. She's preaching to the choir because I too have a collection of series that I have yet to read. I'm also in the midst of collecting a couple other series that I still haven't read and want to own, but that's an entirely different problem for another rainy day. For this post, I focused on four series that I own completely. Two of them I've partially read and the other two I have not. And don't forget to check out Chelle's blog post to see what series she hoards.

Starting off with a series that I've collected and have read a couple of books makes me feel a bit better about hoarding them. Candis Terry is one of my all-time favorite authors. I adore her writing style. I always fall in love with her characters. There is just something about the Sweet, Texas series that makes me always tell myself that I need to finish it, but I never do. Maybe it's because I know that if I do, I won't have any "new" books to read for a while and that makes me sad. I will finish it someday.

Fun fact... The couple on the cover of Something Sweeter is a real life couple and that is one of their wedding pictures.

I feel like I need to be in the perfect mood to finish Sylvia Day's Crossfire series. I will want to read it straight through and hope it won't send me into a tailspin. Let's be honest, it probably will. I read and loved Bared to You and Reflected in You, but completely missed the last 3 books. I was still buying them when they came out. I just didn't read them. The time will come for me to get my Gideon on.

Fun fact... I got to meet Sylvia twice. The first time was shortly after the publication of the first book and the most recent time was just after the last book was published.

I feel less guilty about the Feral Warriors series because they were sent to me by Avon during my first term as an Avon Addict. While I'm not a big fan of PNR, I do want to give this series a try one day. Even if I don't, I'm still not giving them up. It's an 8 book series and I'm seriously not collecting them again should I end up loving it. Fight me. *grins*

There is a reason behind this one, I swear! About 5 years ago, Nora Roberts started re-releasing some of her most popular books (as well as new releases) in a gorgeous trade paperback edition will deckle edged paper and beautiful covers. I told myself that I didn't need to collect them at $17.00 a pop, but when I started finding them in used book stores I couldn't resist. So I did and now I'm 30 books into my collection. Sadly, as my collection gets bigger it's more difficult to find ones I don't have. Why did I pick the Bride Quartet? Well, it's the longest series at 4 books and I haven't read any of them. But they're so pretty...

So, that's my confession. I have others series that I'm currently collecting, but don't have a completed set. Maybe I'll do a part 2 when I have them. Why am I collecting them? Well, I blame used book stores. However, as I purge my library a bit I do find myself parting with a lot of my unfinished series. Mostly to make room for ones I want and know I'll read at some point.

Are you a series collector? Or a series hoarder? What series do you have but haven't read? Let's chat! Also, please don't forget to visit Chelle's blog and send her some love. Huge thanks to her for the inspiration behind this post.
Posted by CrystalBee at 6:00 AM