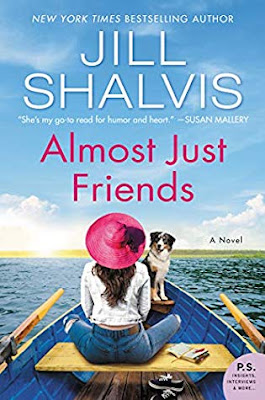 "I need you to know something, Gav. I never minded taking care of you and Winnie. Never. But I wasn't done being taken care of either." - Piper Manning

New York Times bestselling author Jill Shalvis returns to Wildstone with the touching story of finding your place in the world—and the people who make it home.

Piper Manning’s about as tough as they come, she’s had to be. She raised her siblings and they’ve thankfully flown the coop. All she has to do is finish fixing up the lake house her grandparents left her, sell it, and then she’s free.

When a massive storm hits, she runs into a tall, dark and brooding stranger, Camden Reid. There’s a spark there, one that shocks her. Surprising her further, her sister and brother return, each of them holding their own secrets. The smart move would be for Piper to ignore them all but Cam unleashes emotions deep inside of her that she can’t deny, making her yearn for something she doesn’t understand. And her siblings…well, they need each other.

Only when the secrets come out, it changes everything Piper thinks she knows about her family, herself…and Cam. Can she find a way to outrun the demons? The answer is closer than she thinks—just as the new life she craves may have already begun.

Jill Shalvis is back with the 4th installment of her popular Wildstone series. Seeing as this is my first review back (hopefully - more on that later), I'm going to try out a new review set-up that I think will help my transition back into the swing of things. Let's do this!

In A Nutshell: In Almost Just Friends, Jill introduces a whole new group of Wildstone residents. Piper and her family, brother Gavin and sister Winnie, have lived in the small town since the death of their parents when they were kids. As the eldest child, a lot of responsibility was left on Piper's shoulders and because of this she never knew what it was like to put herself first. The needs of everyone else were always her priority, even with her next door neighbor, Emmitt. With the sudden appearance of her brother and sister, along with Emmitt's son Camden home for a visit, Piper's world is suddenly turned upside down and it's time for people to take care of her.

Characters: For the most part, I loved the characters. Piper, Gavin, Cam, and Emmitt were so damn lovable. I loved that they were real. They had flaws and not only did they know it, they spent the majority of the book trying to work on said flaws. Winnie, however, rubbed me the wrong way. Like the others, she is flawed and does her best to correct her wrongs. My biggest concern with her was the lying. I hate characters that lie for no other reason than to protect their own ass and that, to me, was exactly what she was doing. Had she told the truth from the get-go, it wouldn't have exploded in the way it did. She built it up in her mind to be this huge thing when it really wasn't.

Writing Style: Almost Just Friends had the Jill Shalvis writing that we know and love. It's quirky, emotional, funny, and sexy at times. Even though we don't see returning characters, it still feels like Shalvis is welcoming us back to a town we are falling in love with. This series is also a good introduction to either romance or women's fiction since there is a little bit of both in these books.

Overall, I enjoyed Almost Just Friends. It served as a good "welcome back" book to pick up in 2020. It held my attention throughout and left me waiting anxiously for the next book in the series. A good place to start in a new year.

New York Times Bestselling Author Jill Shalvis lives in a small town in the Sierras full of quirky characters. Any resemblance to the quirky characters in her books is, um, mostly coincidental. Look for Jill’s bestselling, award-winning books wherever romances are sold, and visit her website, ww.jillshalvis.com, for a complete book list and daily blog detailing her city-girl-living-in-the-mountains adventures.