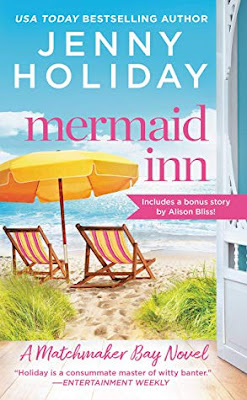 Eve Abbott has a problem--actually, make that a lot of problems. And they're all going to get worse the moment her toes hit the sand in Matchmaker Bay. Once a blissful summer escape, now the tiny town just reminds Eve of loss. Inheriting her aunt's beloved Mermaid Inn is the only reason Eve is coming back. She's definitely not ready to handle nosy neighbors, extensive renovations, or the discovery that a certain heartbreaker still lives down the street...

Police Chief Sawyer Collins always does the right thing, even when it costs him everything. Like Evie. He's spent the past ten years trying to forget her--to forget how right she felt in his arms, to forget the pain in her eyes the day she left. The last thing he expects is to see her back in town or to find that the spark between them is as strong as ever. Sawyer knows this is his only chance to prove that his feelings have always been real... before Eve turns tail and leaves for good.

Well, January didn't go as I had hoped. I haven't said it before, but thank you for sticking with me as I attempt a comeback. It will stick, I promise.

Mermaid Inn was one of the books that I've been looking forward to reading the most the past couple of months. I adored Jenny Holiday's Bridesmaids Behaving Badly series in 2018/2019. She's definitely an author that you should keep an eye on if you're a fan of romantic comedy. Her books have a slight sizzle to them with witty banter and characters that are easy to fall in love with. Going into Mermaid Inn, I was hoping for the same romance I loved. In a weird way, it felt like Mermaid Inn had a different vibe than Holiday's previous series. It had the banter and the lovable characters I adore. It was also sizzling in it's own way. What I think made this book feel different from others was the amount of time that passed, which I enjoyed but it also made the book feel just a tad long.

Setting: The best element of Jenny's books is that they take place in Canada. So fun! Mermaid Inn is a small town romance. Yes, please!

Characters: Sawyer and Eve were adorable. Their small group of friends were fan-freaking-tastic, especially Maya and Law. My favorite part was the friendship and bond that held the friends together.

Writing Style: I love romantic comedy so I think it was inevitable that I would fall in love with her writing. What can I say? She makes me giggle.

I had been waiting so long for Mermaid Inn and Jenny didn't disappoint. With all that said, I enjoyed Mermaid Inn so much it inspired me to crochet a mermaid. More on her in the week!